A Visit from St. Nicholas, in his Jeep 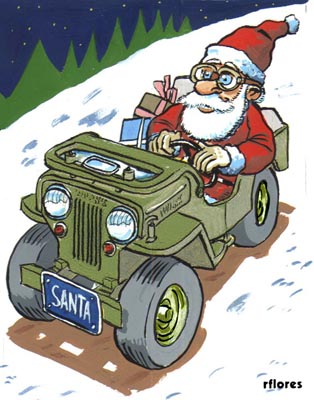 Twas the night before Christmas, and way up north,
St. Nick turned the ignition key, back and forth.
All of the reindeer were still fast asleep,
So Santa knew it was up to the Jeep. 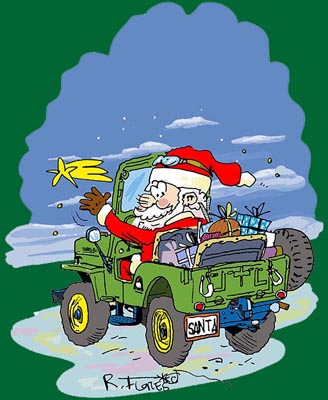 The Hurricane sprang to life with a roar;
He was sure that the 3B could handle the chore.
Stockings were hung 'round the world with good cheer,
As he tried to get the blinkity-blank transfer case in gear. 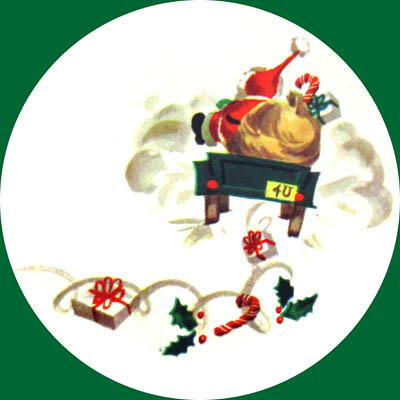 Then straight for the overdrive went old St. Nick;
To make his rounds, he would have to be quick.
His cheeks were like roses, his nose like a cherry;
At the speed he was going, the wobble was scary! 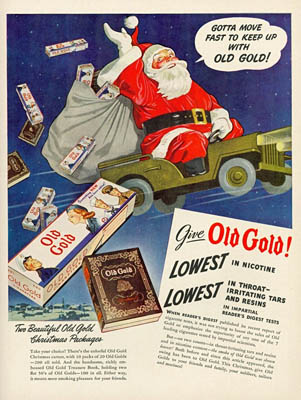 He had toys for the young folks, and socks for the old,
And for those who have everything? Packs of Old Gold!
But as the night wore on, he ran low on fuel;
Not enough to get home, and the weather was cruel. 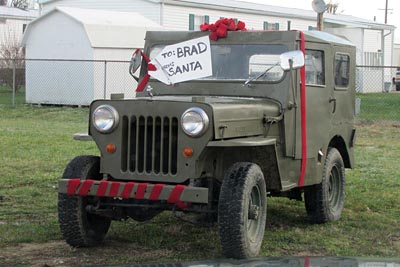 The tank was empty as he made his last stop,
So he wrapped up the Jeep, complete with its top.
He texted Rudolph, to say "Out of bed!"
The reindeer had breakfast, and brought Santa's sled. 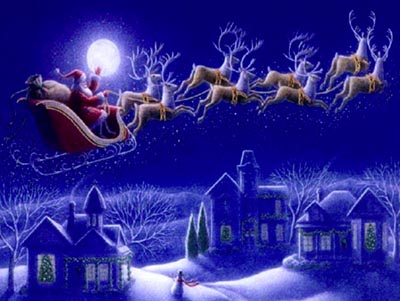 He sprang to the sleigh, to his team gave a whistle,
And away they all flew like the down of a thistle.
But I heard him exclaim, as he made his escape,
"I miss that high hood already -- maybe I'll keep an eye open for a 3B for sale with a body that's in decent shape..."


Thanks to Clement Clarke Moore, author of "A Visit from St. Nicholas", also known as "The Night Before Christmas".

Thanks also to Roberto Flores for the first two illustrations, and Brad Kahler for the gift-wrapped Jeep photo. The rear view is from a vintage greeting card and the "Old Gold" ad is from a LIFE magazine dating from World War II. The reindeer illustration is from an automotive review of Santa's sleigh. -- Derek Redmond