Found Along the Roadside 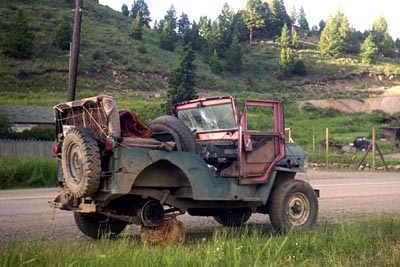 Zoltan Porkolab is an M38-A1 owner in Budapest, Hungary, who posted these pictures on the CJ-3B Bulletin Board in 2012. He said, "Many years ago, I was driving through Montana. Stopped in a little village, and there was a CJ-3B sitting on three legs. I took some pictures of the jeep, and just found the negatives and scanned them. The owner must have been a comfort loving guy; there is a large sofa in the back. May have been restored since, and winning shows or...?" 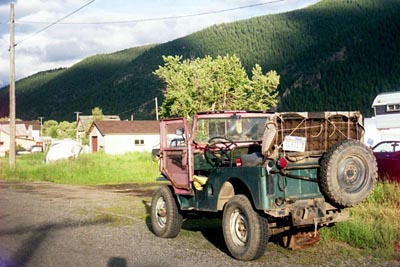 John Goering, who drives a 1955 CJ-3B in Montana, commented: "The plate is Jefferson County, and with the background scenery, I'mgoing to guess the village is probably Boulder on I15. And, I don't think the Jeep was abandoned when that photo was taken. Axle problem yes, but with sleeping bag in the rear seat, obviously still in use. Lots of old mines/mining roads in that vicinity, including the ghost town of Elkhorn -- perfect for an old Jeep.

"Interesting that the back of the windshield is pink. Looks like the guywas having a bad day and lost a wheel bearing. That back seat is something else... lol." 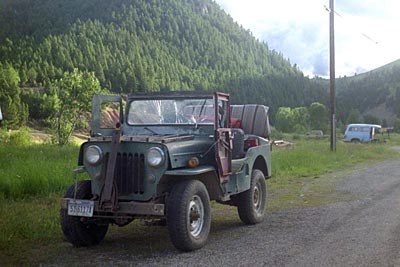 Bulletin Board member "t56tr" added: "That's one of those 'drive-in movie' rear seat kits from the old Sears catalog. Love the Folgers can ashtray too."

Thanks to Zoli for the photos. Check out the scenery, and some other old vehicles, in the background of the large copies of the pictures. 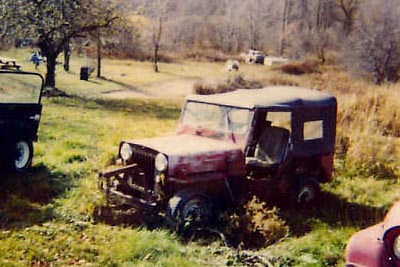 Back in the 1990's Bart McNeil made these comments about looking along the roadside for a Jeep to buy: "There are usually several CJ-3Bs for sale on the CJ-3B Bulletin Board. Looking further on the Internet you probably could come up with another one or two. There are a few more for sale in local newspapers around the country. The great majority though, are probably just sitting out there with a sign on the windshield or no sign at all."

This photo was taken by Tom Edwards near Cortland, NY in 1990. 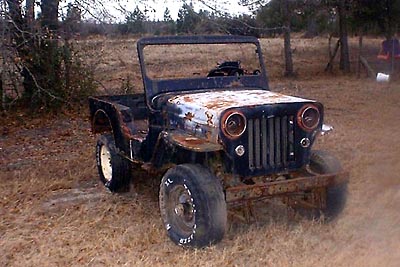 "In my case I was looking for anything from a CJ-2A to a CJ-3B, with emphasis on a 2A. I figured I couldn't rely on the Internet due to moving costs and problems viewing the Jeeps. My budget was low so I estimated about a 20 mile radius (moving costs). I began searching local newspapers and Pennysavers for ads and farm auctions. But my best luck came from driving back roads and small towns and keeping my eyes open all the time. When I found one I would ask or leave a note, whether for sale or not. I had no luck but often people were willing to discuss their own and other CJ's they were aware of."

This photo is by Brent Langdale. 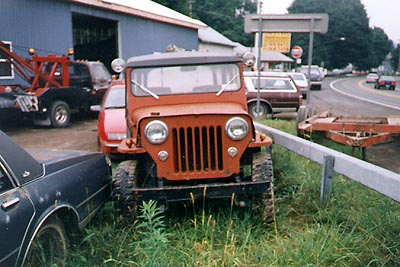 "I still had a few to check on when I saw this CJ-3B (1953) alongside a road near my cottage in upstate New York. It was near a repair shop but had no sign on it. I asked and was told they wanted $2500. That was way beyond my budget so I walked away. The next day I returned and made an offer in writing of $1000. I also took a few pictures and walked away thinking I would never see it again.

"Six months later I received a phone call, and after some dickering bought it for $1500. I think I paid a fair price, although not necessarily a bargain. Getting it home I had some surprises, good and bad, but I achieved my goal of an interesting restorable CJ. 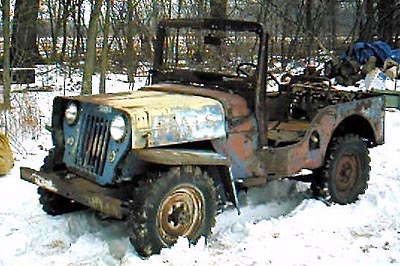 "Certainly if you have money you can have a nice CJ in a week, but if you are on a budget it will take longer. Probably a lot longer. But the point is that they are out there, for almost any budget. It may take a year or two to find the one you want and can afford, but they are out there." -- Bart McNeil

The Jeep in this photo was found and purchased by Brian Hurt. 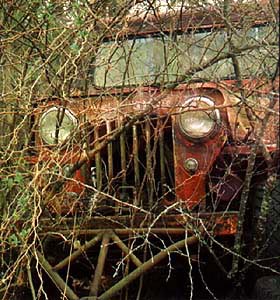 Frank D. Gough II in Tennessee found and bought this Jeep in the late 1990's, and it took a while to figure out how to get it out without hurting the fruit trees around it. See also a side view showing the steel hardtop (20K JPEG). 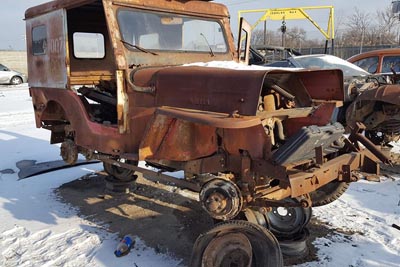 Of course, once you've bought a CJ-3B, there's always the question of how to get it home. Especially if it has no wheels. Josh Gluba spotted this 3B, high and dry but complete with engine and hardtop, at a junkyard in 2017. 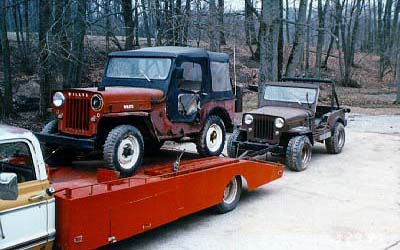 And what if you've bought two on the same shopping trip? This photo first appeared in Rescuing a Jeep, the story of Dan Bever's purchase of several early-50's 3B's in Indiana.

At the time, Dan said, "I thought I would have to make two trips but it turned out that the brown 3B had a tow bar on it. So I was able to bring both back at the same time which saved a lot of time and gas. My car hauler ('71 Chevy) likes to drink the gas. Plus it is about a one hour 45 minute trip, two hours if you take kids, which I did. They have to stop about every 20 miles. Anyhow, got everything loaded and had an uneventful trip back." 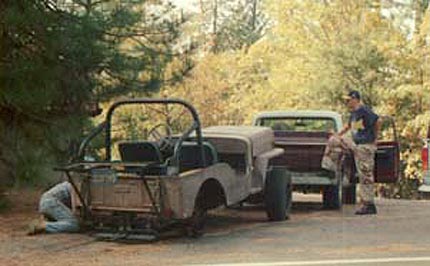 JC Jenkins in California says, "This picture was taken as we were trying to tow my '62 3B home with a tow bar instead of a trailer. Both rear wheels sheared the keys on the axles, dropping it on to the spring plates. First lesson learned. The driveway we are on, belongs to a retired machinist, who rethreaded the axles and got us back on our way. What luck."

Also on CJ3B.info, see this Jeep in action on the Rubicon Trail.


Thanks to Bart and all the photographers. -- Derek Redmond

For more on towing, see Towing a Jeep in the Tech Tips section.