Way back in 1995, in the Montreal Gazette classifieds there was an ad for a 1963 Jeep for sale. Didn't say what model or condition, just with snowplow and boosting system. Asking price $2000.

Now me, being a collector of fine Willys vehicles for over 10 years at that point, had already started dialing the first numbers before even getting to the last numbers. I was the proud owner of 3 pickups and 3 wagons from the early 60's, and one bovinal-looking '66 Wagoneer! 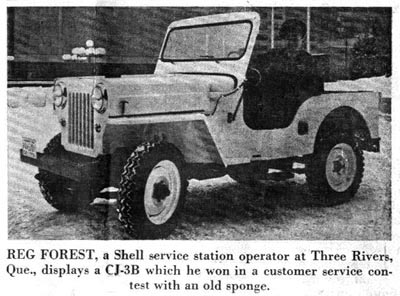 Upon answering my call, the owner of the Jeep answered my questions. What model? CJ-3. What engine? 4 cylinder. Licenced? Not since 5 years. Roof? Steel. Mileage? 37,000. Snowplow pump? Hydraulic.

Next he told me that he had had the Jeep since new, and that he had won it in a contest, from Shell Canada. Wow!!!!! Turns out that he had been a Shell service station operator in Three Rivers, Quebec, and Shell had run a customer service contest in 1963, which he won. See the full story in Jeep News, Vol.9, No.4 (300K JPEG).

Unfortunately I was unable to buy the Jeep, but it inspired me to write the Christmas poem below. 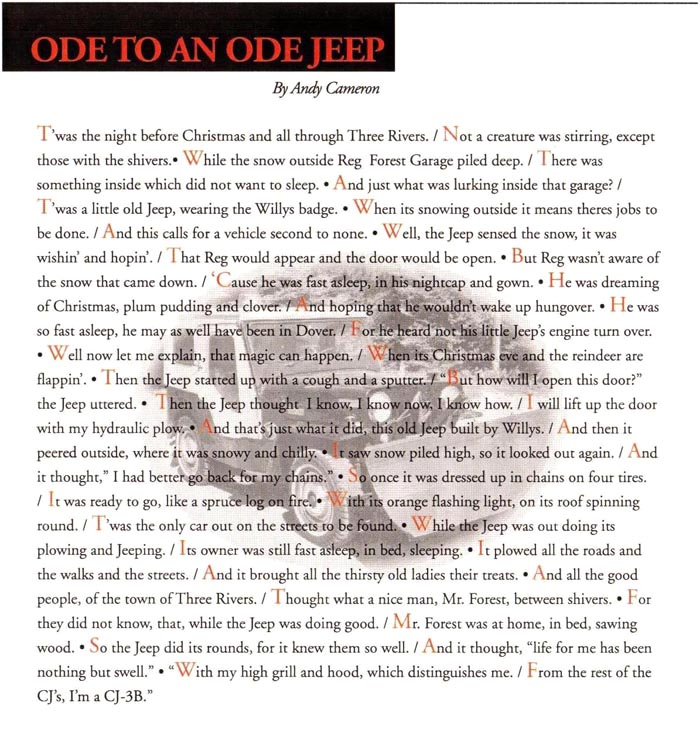 Thanks to Andy for the story and the poem. -- Derek Redmond