Delivery Jeep:
A Glimpse Into a Bygone Era

When you start studying a great photograph, you can discover all kinds of things. Sometimes doing a bit of research can solve the mysteries of the picture, as we did with Conshohocken Truck "J". And sometimes the mysteries remain, as in the case of the photo from Croatia, 1955. But after Federico Cavedo sent me another 1955 photo, I went looking for some background information on this new one, and it took me in surprising directions. See the footnotes at the bottom of the page for references. -- Derek Redmond 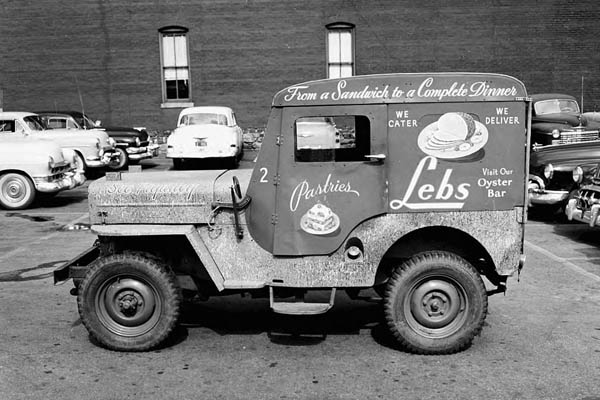 I didn't learn much about the Jeep itself, beyond what we can see by looking closely at the photo, which comes from the Lane Brothers Commercial Photographers Collection at Georgia State University. (1) It is dated 25 May 1955 and captioned, "Jeep outside the Bell Telephone Company."

Judging by the shadow, it was taken around noon, so perhaps the Jeep was delivering lunch to some Bell employees.

Notable features of this early CJ-3B include the speckled paint job and the extensive advertising on the hardtop; I wish the photo was in color. There is also what appears to be a homemade hinge for a swinging door on the rear, to make unloading easier. And I was interested in finding out about Leb's Restaurant -- why did they choose a CJ-3B as their delivery vehicle? The painted number 2 suggests they may have even had more than one Jeep. And last but not not least: what were the words painted on the hood? (The answer to that is below.) 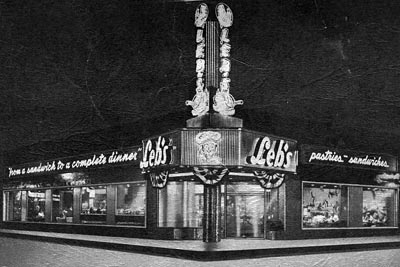 I soon found an advertising photo of the restaurant (right), with a good crowd inside, and a postcard (150K JPEG) which indicates that by August 1953 there was Leb's in Atlanta and also a second restaurant in Jacksonville, Florida.

A U.S. federal trademark registration was filed for the Leb's logo on 22 January 1954 by Lebco, Inc. of Atlanta. (It expired in 1996.) The description provided for Leb's was "cakes, french and danish pastries, bread, bottled pickles, canned fish, mustard in jars, canned smoked oysters, canned fruits, and cheese." (2) 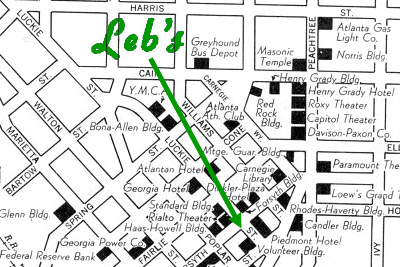 Leb's was located at 66 Luckie Street, at the corner of Forsyth Street. Right across Forsyth was the Rialto Theater, which had opened in 1916 as the largest movie house in the southeastern U.S. This 1950s-era map shows what soon became the theater district of Atlanta, with cinemas lining nearby Peachtree Street. The Rialto stayed open during the Great Depression, and at one point in its history boasted the largest electric sign above a marquee south of New York City. (4) 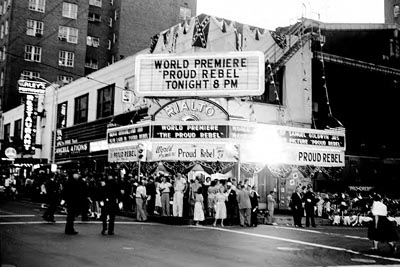 More than one Hollywood movie was premiered at the Rialto, across the street from Leb's. (3) This photo from 27 May 1958 shows the world premiere of the film Proud Rebel, directed by Michael Curtiz (Casablanca) and starring Alan Ladd and Olivia de Havilland. (5)

The photo comes from the same Lane Brothers Photographers Collection as the photo of the Jeep; it was perhaps taken by the same photographer. (The Collection consists of about 258,000 negatives spanning the years 1920 to 1976, and photographed by the company started by Jack Lane and his brother W.C. Lane, as freelance shutterbugs for the Atlanta News.) 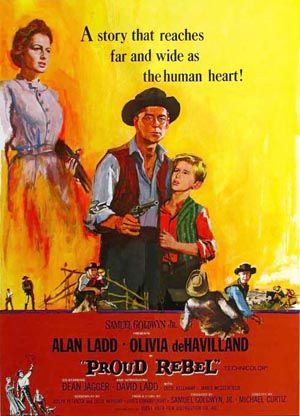 The Confederate battle flag hanging from the roof of the theatre had been adopted as the state flag of Georgia in 1956. (6) The presence of the flag at the premiere, and the title Proud Rebel, suggest a film about the Civil War. In fact, it was more of a heartwarming family western, and is still available on DVD.

Alan Ladd plays the single father of a son (played by his real son David Ladd) who was traumatized by the death of his mother in the burning of Atlanta, which is the only real connection with the Civil War or Atlanta. In postwar Illinois he meets a woman (de Havilland) who needs his help protecting her ranch from the local landowner who has designs on it.

One reviewer on IMDB says, "A stronger dose of romance might have livened up some of the slower moments. Children will be drawn to the theme of boy/dog and man/son relationships -- but adults may find it not quite as heartwarming as it strives to be." But another says Proud Rebel is "an overlooked minor classic in the same genre as Old Yeller." 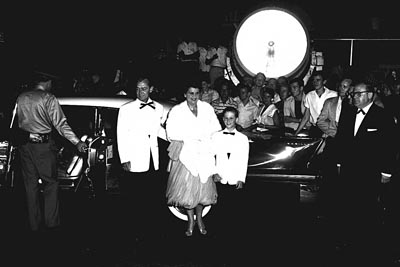 Another Lane Brothers photo shows the crowd watching Allan Ladd arrive at the Rialto premiere with his wife and agent Sue Carol, and their son David, in a 1958 Cadillac Sedan de Ville. The younger Ladd went on to become a successful child and teen actor in movies and television, before becoming a producer and studio executive. 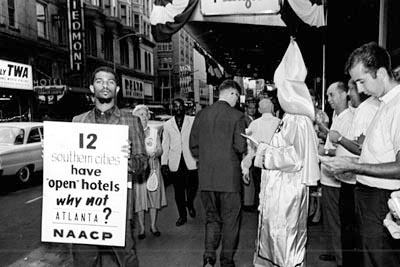 But within a couple of years another kind of crowd began to gather regularly at the corner of Luckie and Forsyth, outside Leb's Restaurant. Owner Charlie Lebedin was well-known as a segregationist, and Leb's, like most downtown restaurants and hotels, did not allow African-American customers. In the early 1960s, protesters including students from Atlanta colleges, began to hold repeated pickets and sit-ins, and Leb's was a frequent target. (7)

This photo by Bill Young of The Atlanta Journal-Constitution shows protesters in July 1962, passing a Ku Klux Klansman who is handing out pro-segregation leaflets in front of Leb's, across Luckie Street from the Piedmont Hotel. (8) 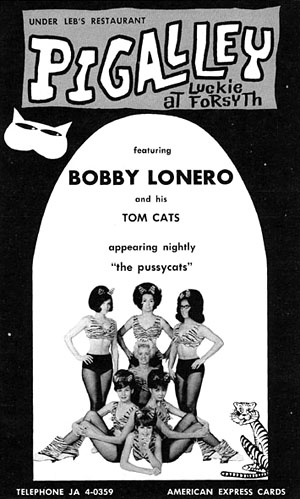 The times were changing. After a series of civil rights protests that were met with increasing violence, Leb's and the other downtown restaurants were finally integrated on 23 July 1964. (9) But Leb's had lost the chance for its mark on history to include the idea of a delivery Jeep, or the combination of pastries and oysters. Instead, history would remember only its stubborn attempt to resist civil rights for all Americans.

In 1962, the original Rialto Theater was torn down; a larger Rialto was erected on the same site, and remained open until 1989. After it was empty for a couple of years, Georgia State University spearheaded a renovation that resulted in the new Rialto Performing Arts Center in 1996.

So one puzzling question remained; what was painted on the hood of the Leb's CJ-3B? Then I stumbled onto a 1965 ad (left) for the nightclub in the basement below Leb's, called Pigalley, with its cocktail waitresses known as "the pussycats." (10) I suddenly realized the words on the hood were one more piece of advertising: "See Pigalley"!

As of 2012, there was still a restaurant on Luckie Street across from the Rialto Center (100K JPEG) -- it's now known as the Landmark Diner.

The fate of the Leb's delivery Jeep is unknown -- it's something to keep an eye open for.

Thanks to Federico Cavedo for finding the Jeep photo in the Georgia State University Libraries. Thanks to Google Street View for the 2012 photo. -- Derek Redmond