Work and Play, Then and Now

CJ-3Bs doing what they do best... everything. 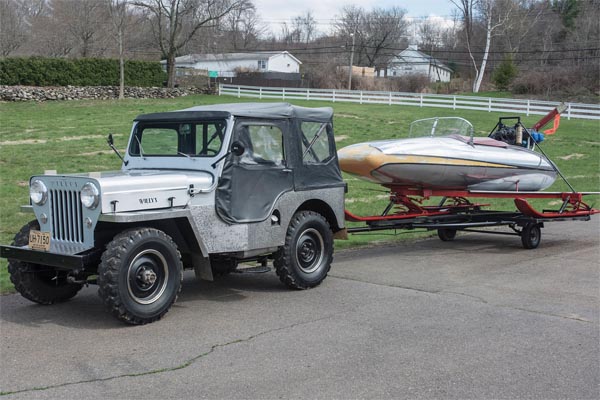 This 1954 Willys Jeep CJ-3B, restored with a (partly) stainless steel body, was sold by Sotheby's for a big chunk of cash at the Auctions America Auburn Fall Sale in 2014. Included with the Jeep was a 1958 Snow Speedster, originally built for a hotel on Houghton Lake in Michigan. The unique ice boat is powered by a Continental airplane engine and has Ford "steering." 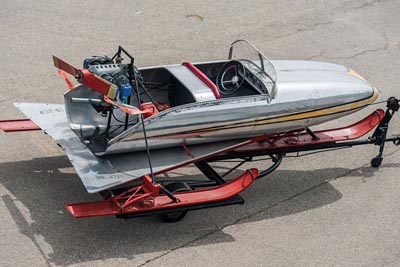 Houghton Lake, a popular resort and fishing area, is one of the largest natural inland lakes in the United States, about 10 miles north-south by 5 miles east-west (see a 360-degree view of the lake.) Summer is the busy tourist season, so a hotel apparently had the Speedster built to attract guests during the winter.

I thought in 2014 that auctioning the pair together was an odd decision, and wondered if the buyer would be a high hood fan or an ice plane fan. Well, I guess the Jeep was the big attraction -- the Speedster came back up for auction in the fall of 2018! 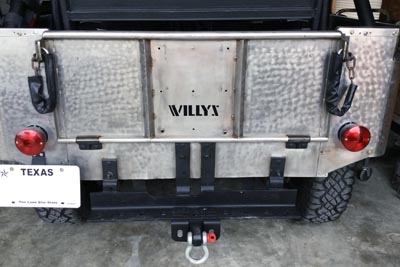 As of January 2019 the Jeep was on eBay. John took some photos for us in Texas, and commented that it was reskinned with pop rivets (140K JPEG), had a homemade fuel tank (140K JPEG) and could have used more attention to detail (170K JPEG). 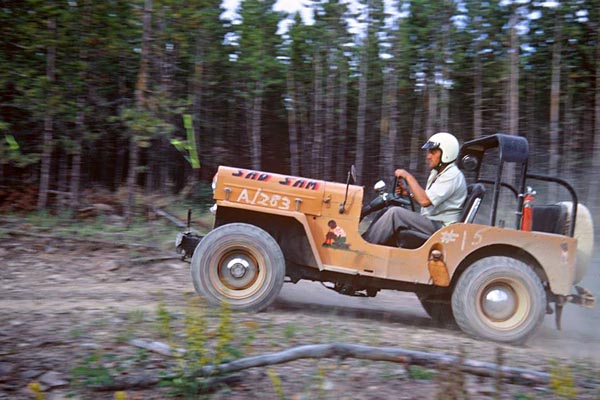 But who said a CJ-3B can't be a speedster? Here's "Sad Sam" in an offroad rally at Happy Valley, outside Calgary, Alberta in 1970.

Sam is clearly a fairly serious competitor, with upgraded steering and a tach visible in this photo, but what's under the hood is a mystery. The baby moons are a real vintage touch. 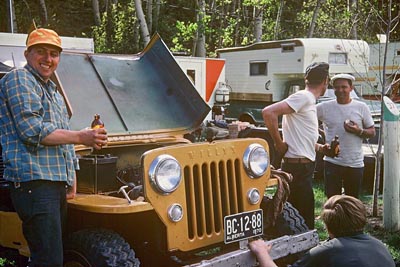 Even in some pictures with the hood up, we can't quite see what's going on in there, although it's safe to say it isn't stock.

This is a gathering of the Four Wheel Stampeders, a 4x4 club that was very active for a decade or so in Calgary, in the late sixties and early seventies. Canadians of a certain age will recognize the "stubbies." 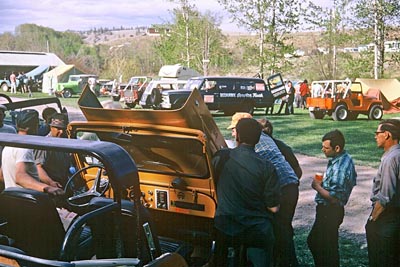 These photos are courtesy of Four Wheel Stampeders 1968-1975 on Facebook, a nice collection of vintage four-wheeling action with quite a few Jeeps. 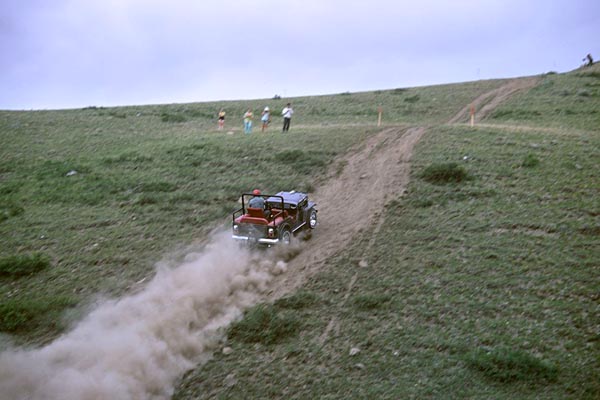 Here's a great shot of a very stylish CJ-3B attacking a hill, again circa 1970. 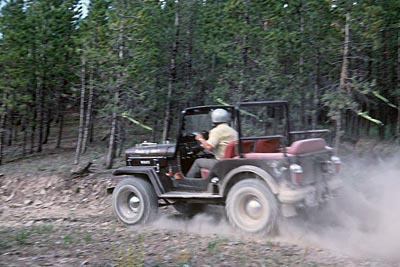 On this Jeep, the bigger rims and hubcaps fit right in with the hood ornament, flares all around, and red upholstery. I'm not sure about the origin of those taillights -- anybody recognize them? 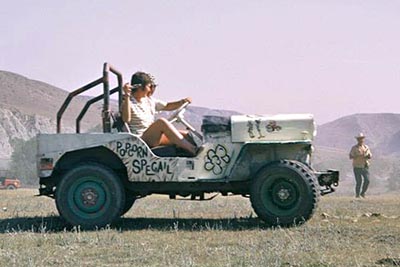 The "Popcorn Special" shows a little less concern for style. This is another member of the Four Wheel Stampeders, near Lethbridge, Alberta circa 1972. 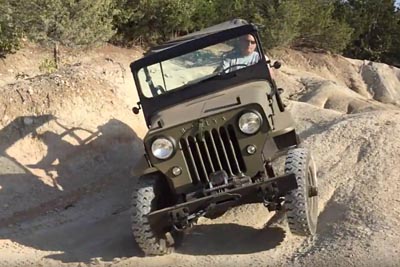 And we're still doing it! Here's Scott Frazier, at the 2017 Fall Willys Reunion in Missouri. Thanks to Jeff Petrowich for the photo. 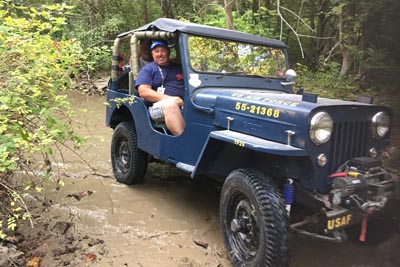 At the same Reunion, this is Kris Carlson's 1955 3B. Kris comments on his USAF paint job: "Not 100% sure if the Jeep was Air Force, but it has the military supply arms data tag, and it was painted close to the Strata Blue. Found that the hood had yellow under the blue. Possible flight line or follow-me Jeep. Story I was told when we bought it was that it was with the Chicago Fire Department at some point." 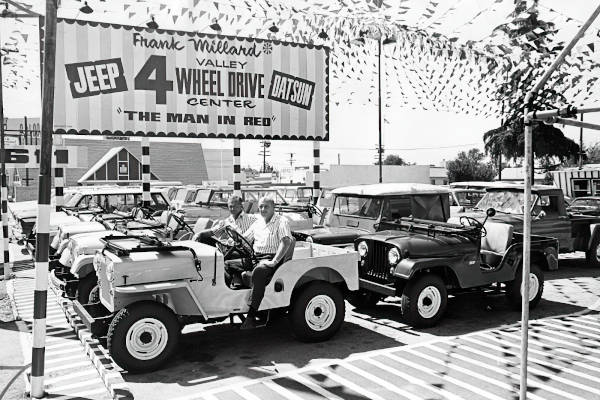 Talk about sharp paint jobs. Glacier White was replaced in 1963 with White Cap, which was closer to a pure white. Maybe this was part of the rebranding by Kaiser Jeep, since Glacier White had been a Willys standby since 1956.

The photo by Bob Miller is from the Valley Times Collection, Los Angeles Public Library. Too bad it's not in color! 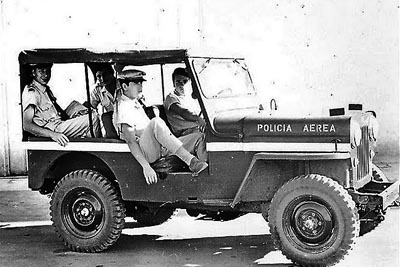 Similar pose, in another Air Force Jeep, half a world away. This is the Portuguese Air Police at Aeródromo Base 4 (AB4) in Henrique de Carvalho, Angola in 1967. (The city and airport are now renamed Saurimo. See a map, 140K JPEG.) Photo by Floriano José Antunes. 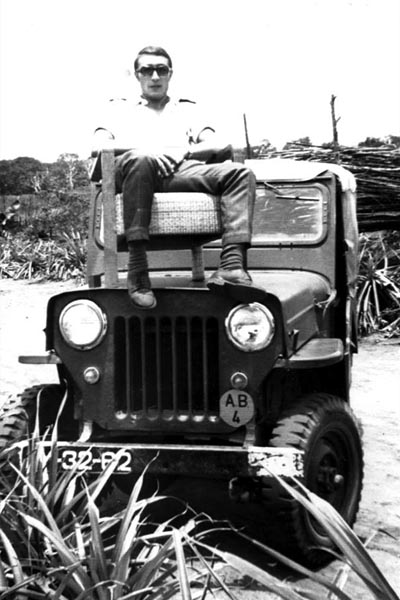 And when things get really boring, have you ever felt the urge to just put a comfy chair up on the high hood where you can get a good view? Maybe a good spot to watch a parade or shoot squirrels.

Another photo from AB4, this is circa 1970, taken by José Mário Santos, scanned by Abilio Pimenta and courtesy of Ex-FAPs of AB4 on Facebook.

The Portuguese military was in Angola waging an ultimately futile war from 1961-1975, trying to hold on to their African colony (see Jeeps at War in Angola on CJ3B.info.) 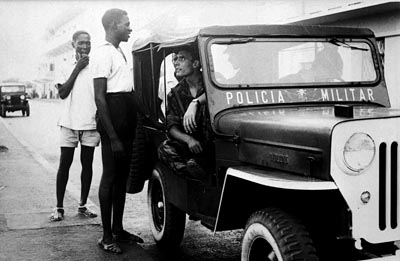 Angola was not the only Portuguese colony in Africa, and this Jeep full of MPs was joking warily with the locals in Guinea (see the map, 140K JPEG) on 15 March 1969. 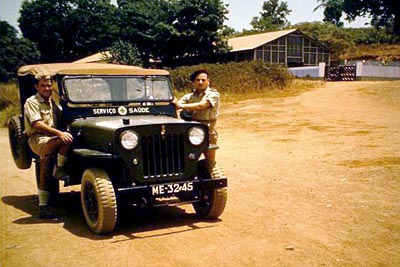 And in nearby Guinea-Bissau, David Dias Leite (right) was a surgeon with the Serviços Saúde ("Health Service"), providing healthcare to soldiers and civilians between 1963 and 1965. He comments that when he arrived, "There were only 925 Portuguese soldiers there. When I left in 1965, there were 22,000 soldiers." 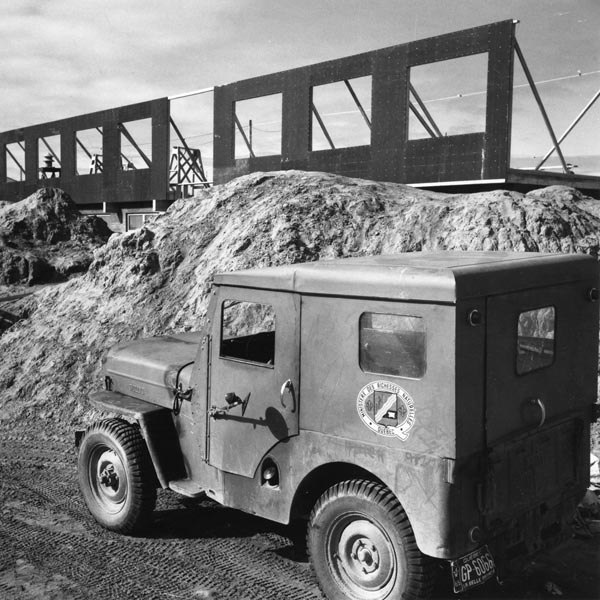 Another working Jeep, at Fort Chimo in northern Quebec in 1965. The hardtop CJ-3B belonged to the province's Ministere des Richesses Naturelles (Ministry of Natural Resources).

The photo by Barbara Hinds is captioned "The Quebec Provincial School goes up in Fort Chimo alongside the existing Federal school," in the Dalhousie University Archives 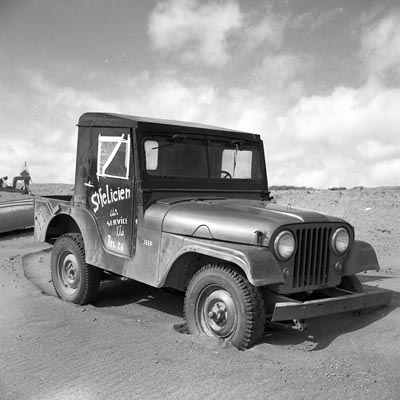 Today, Fort Chimo is officially known as Kuujjuaq, in the Ungava Bay area of of northern Quebec (see a map, 90K JPEG.) Back in the day, the name was pronounced with a hard "i" as in Ch-aye-mo -- not Chee-mo as heard today. The word comes from the Inuit phrase saimuuq ("Let's shake hands!") The name was also adopted by the Canadian Combat Engineers. (Chimo) 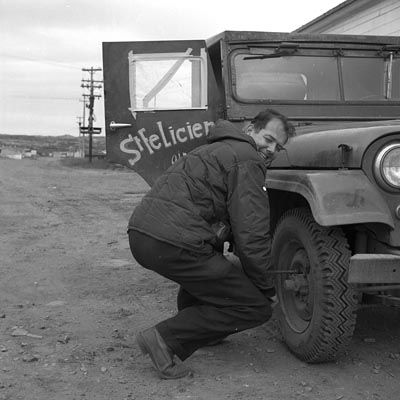 Here Barbara captured for posterity Gordon Braley changing a tire on the CJ-5.

Barbara Hinds (1924-2014) was born in Liverpool, and moved to Canada in 1956, where she worked as a journalist for Halifax newspapers for 33 years. In 1960, she travelled to Fort Chimo to interview Inuit families, and this led to a number of trips to the Eastern Arctic and the Yukon. On one trip her friend Rosemary Eaton took a picture of Barbara Hinds and her camera (180K JPEG).

These photos are all from the Dalhousie University Archives. 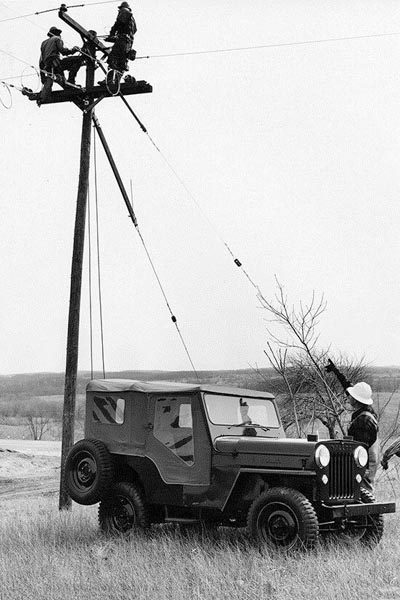 It's hard to know how authentic this shiny CJ-3B, with its pristine vinyl windows, is as a working Jeep. This is clearly a Willys promotional shot, so the chances are that they took the brand new Jeep out around Toledo (with no license plate) looking for somebody at work to serve as a backdrop, and found this cooperative utility crew.

But it's a great photo, and comes courtesy of Walter Miller's AutoLit, probably the world's largest dealer in Jeep and other automotive photos and literature. 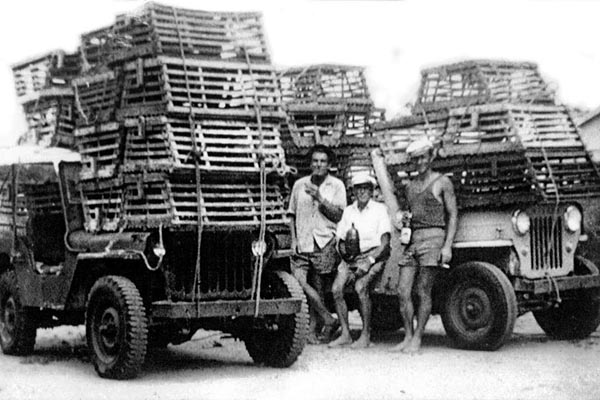 On the other hand, there is no doubt that this is the real thing! This trio is going crayfishing at Little Bay in Horrocks Beach, Western Australia. The undated picture was dug up by Finlay's Kalbarri on Facebook.

Horrocks Beach is now on my list! It was rated as the #1 Mainland Beach, in Tourism Australia's Best Australian Beaches for 2018. Among the attractions mentioned is the off-grid camping accessible by four wheel drive at Little Bay, for picnics, fishing, wildflowers and birds.

Thanks to Federico Cavedo and Hanno Spoelstra for photo research, and to all the photographers. -- Derek Redmond