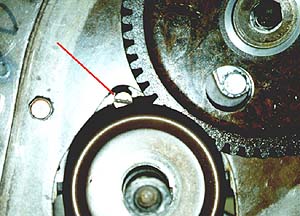 Install the oil jet (pointed out in the photo by the red line.) When you install it, ignore the screwdriver slot and use a socket or a wrench. Point the oil jet's hole so its oil stream will hit the fiber gear where its teeth begin to engage those of the steel timing gear.

If your engine has the larger oil jet and you feel it necessary, you can find a new jet, or silver solder or braze the hole shut and redrill it to the smaller size. I don't think replacing the old style oil jet is a major concern.

I think an engine's #1 rod bearing would get starved for oil because the engine is worn, and to make up for low oil pressure readings, a higher viscosity oil is used. The heavier oil, when cold, doesn't flow through the narrow oil passages as well and may actually reduce the amount of oil reaching the bearings. The #1 rod bearing is most sensitive to this problem because its oil supply has to travel the longest path. This path also supplies oil to several other places, each of which reduces the oil supply to the #1 rod bearing. 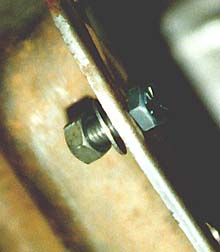 I was shown an easy way to fix this. Use a bolt the same diameter as the one normally used in the hole you want to straighten. Put the bolt through the hole with the bolt head on the side of the metal that would normally be against the gasket. Put a washer on the bolt and thread a nut onto the bolt. The washer needs to fit flat against the outside of the cover or pan, so make sure the lip on the metal piece isn't in the way of the washer. If the washer is too big, a large nut that will slide over the bolt can be used.

As you tighten the nut, the bolt head will pull the distorted metal against the washer and back into position. This won't take a lot of effort, so don't over tighten the nut. Also, use a wrench on the bolt head to prevent it from turning and scraping metal from the cover.

To check your progress, lay whatever you are straightening, without the gasket, into position on the engine and check for gaps between the sheet metal and the block. When any gaps are less than about 1/4 the thickness of the gasket, the metal's surface is flat enough.

Install the front crankshaft oil seal. The open end of the seal (with the lip) should face toward the block. To help prevent oil leaks, coat the metal sides of the seal with gasket sealer. After installing the seal, clean the seal lips with an alcohol soaked cloth and put some engine assembly lube on the seal lips.

In my gasket set, assembled by Crown Automotive, there were two front crankshaft oil seals. At first I thought an extra seal was mistakenly added to the gasket set, but the seals had different inner diameters. One measured 2.645 inch and the other measured 2.690 inch. The surface of the crankshaft pulley that the seal would seal against measured 2.740 inches. On my engine, with the single groove pulley, I used the seal with the 2.690 inch diameter.

It is possible to install the seal without a seal driver, but it will severely test your patience. A seal driver tool makes this job much easier. A piece of steel plate (not sheet metal) that will completely cover the seal will also work. Set the seal in the hole, set the plate on top of the seal, get the seal aligned with the hole and GENTLY tap it in. If the seal gets turned slightly sideways in the hole and will not move further, simply pull it out with your fingers and try again. It will still take a few attempts, but it is still much quicker than not using any driver at all.

Before Installing the Timing Gear Cover

Your engine may have a pointer to the timing notch on the crankshaft pulley. If so, have it ready to install as it is held in place by the same bolts that hold the timing cover in place. When the engine is upright and viewed from the front, the second and third 3/8 inch bolts, counting from the lower left corner of the cover, are the ones that hold the timing pointer.

Check that the timing gear gasket's holes align with the holes in the block. I've noticed about half of these gaskets have at least one hole that doesn't line up correctly. If the gasket is paper, soak it in water for a few minutes, set it onto the engine, gently stretch it as needed and thread the bolts into the holes to hold the gasket in place until it dries. Some of the new gasket materials don't respond to the water treatment, so be prepared to use a paper punch to make new holes.

Once everything is ready, coat the gasket with gasket sealer. Also coat the threads of any bolts that go into holes that extend into the crankcase. This last step prevents oil from seeping around the threads of the bolts.

Coat the machined surface of the crankshaft pulley with engine assembly lube. This will ensure the seal doesn't get torn when the engine is first started. 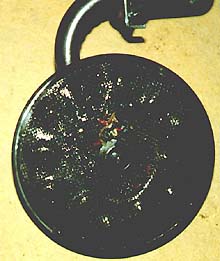 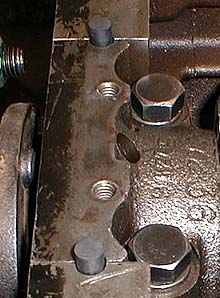 Put the rear crankshaft seal packings into the two holes in the rear main bearing cap. The packing will stick out about 1/4 inch (6mm). Sometimes the packing will not easily fit into the holes. Putting water on the packings and twisting it into the hole usually helps with this problem. If that fails, get a different packing set. I've not had any luck with trying to shave off material from the sides of the packings. Whenever I have tried this, I have ended up with an oil leak. 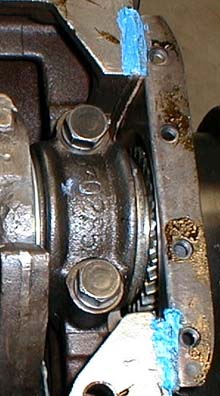 When you install the oil pan, the crankshaft pulley shield goes on the outside of the pan at the front of the engine. The lip of the oil pan interferes with this shield and you will need spacers under each hole of the pulley shield. Two 5/16 inch AN flat washers stacked one atop the other make a suitable spacer.

This summer I lost all of the oil pan mounting bolts. The bolts are 5/16 inch NC, 5/8 inch in length. The 1/2 and 3/4 inch lengths that are commonly available would not work. An industrial hardware supplier had the AN flat washers and these odd length bolts.

Again, watch the gasket as you tighten the bolts. If the gasket looks like it is being squeezed out from under the oil pan, you are over-tightening the bolts. -- Eric Lawson