This Dauntless V6-powered CJ-5 owned by John Shows of Mississippi, was built in Canada in 1969, possibly at the Kaiser Jeep factory in Windsor, Canada. It carries serial number 8305 C17 352694 and John thinks it may be one of the last 12 Jeeps produced there, but it is a bit of a mystery. A newspaper article (50K GIF) from the Windsor Daily Star of 26 July 1969 says the last Jeeps had V6 engines.

Joe Donnelly, an employee at the Windsor plant for all of its ten years of operation, comments:

"To the best of my knowledge we never installed any V6 Engines while the plant was in Windsor. I worked for that company for the full time of it's existence in Canada and we never ever put any V6 Engines into any of them. I suspect that Jeep with the V6 engine was produced in Canada but in the American Motors plant in Brampton after they bought the Windsor plant out. I remember hearing they were planning to add a different power train so eventually their engines were incorporated into the lines."

Another CJ-5 with a later Canadian serial number (8305 C17 356593) was registered on the former Early CJ-5 website. It's surprisingly 4000 units later than this Jeep, but it seems possible these numbers may have originally been assigned when bodies were fabricated in Toledo for shipment to the assembly plant in Canada, and may not represent the order off the line in Canada. There was also an earlier serial number (8305 C17 352340) listed. 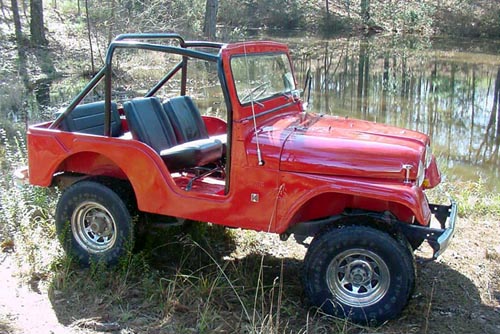 John's Jeep has some unusual features that apparently were found on the final production run in Windsor, but since the Jeep has seen some later modifications, it's difficult to determine exactly what is original.

"The last 12 Jeeps to come off the assembly line in the company's Windsor plant were specially-created Jeep 'Wheelies', wildly-painted fun machines that look more like oversize dune buggies than the rugged, utilitarian military Jeep.

"The 'mod' Jeeps will be offered to the company's Canadian dealers as special models. They are dazzling in their 'Big Bad' green, blue and red paint jobs (colors borrowed from American Motors), with non-glare, matte black hoods.

John comments, "My hood had the black stripe on it when I bought it. However, the windshield frame was not black -- it was red." (Note that the black hood stripe also appeared on the Renegades of the early 1970's.) 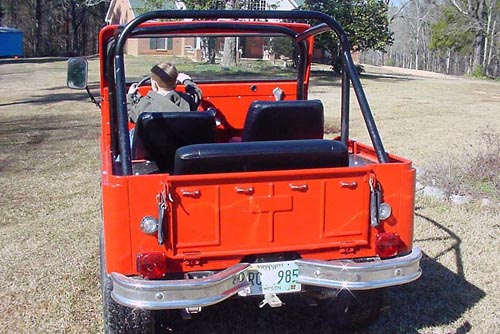 Perhaps the most notable feature on this CJ-5, is the chromed rear bumperettes. John wonders, "Do you think maybe they were made specially for the last 12 'Mod Jeeps'? For what it's worth, I wouldn't have doubted the originality of them, since I know what they look like and how well they fit. And remember, I have the chrome bumper on the front just like a 5A."

Unfortunately the rear end is not visible in the 1969 newspaper photo. And although the CJ-5A Tuxedo Park did have a similar front bumper, it also had a simple, one-piece rear bumper, as seen in an advertising photo (60K JPEG). The square trailer taillights on John's Jeep are also temporary replacements. See a rear photo with the tailgate open (140K JPEG).

We would be interested in any information on a similar rear end on other Jeeps.

Click any of the photos below to see a larger copy (140K JPEG).

As of early 2004, John describes the work he's done in the past year or so: 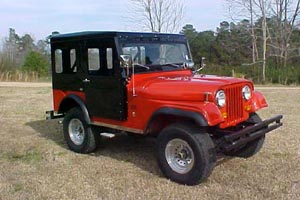 "I bought a Koenig model 550 Super Cab from Stan Day out in Albuquerque NM. I also bought a Bantam BT3C trailer to pull behind the Jeep but haven't restored it just yet.

"I also pulled the engine out and re-painted it (100K JPEG) as close to the original color as I could get. I had some decals reproduced that matched the originals on the air breather and the rocker arm covers. Then I picked up some other miscellaneous decals for the dash such as serial number and shift patterns.

"I've completely re-built the heater system with as many original parts as I could get. The only thing that's not original on the heater is the Chevy heater motor." 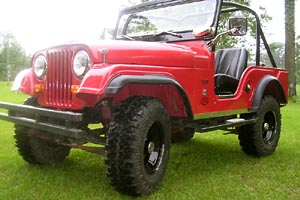 "I also bought a set of 4 Kelsey Hayes 15" x 8" wheels for it and have them installed and painted black. I actually had a single KH wheel already. It was given to me by the PO when I bought it, as the spare. I didn't even know about KH wheels at the time so it just looked like a plain old steel wheel to me. Having received the KH wheel as the spare, I'm convinced that the Jeep must have been sold with them on it. I'm beginning to think I have the 'Mod Jeep' in the newspaper article -- that Jeep has 8" KH wheels.

Thanks to John Shows for the photos of his Made-in-Canada Jeep. Further information is welcome. -- Derek Redmond