Across Europe in a CJ-3B 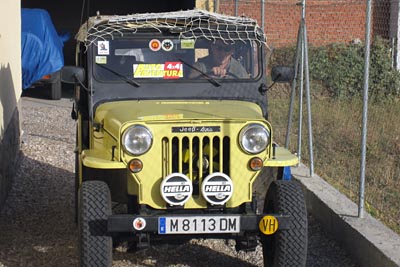 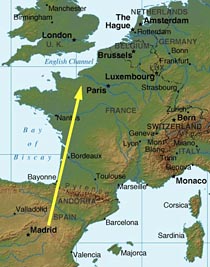 In the summer of 2007, Francisco Garcia, director of the Madrid region of the Club Willys Clasico de España, made a trip with his wife Marisa and two daughters, from Madrid, Spain to the Normandy beaches of France and back, in his CJ-3B. 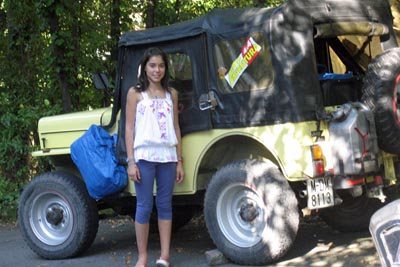 The outside of the Jeep Avia was covered in supplies, and when it got too hot the doors could be stashed on the roof. This photo of Francisco's older daughter Charlotte was taken near the border with France, after the first day of the trip. Charlotte was still looking pretty enthusiastic at this point.

The family usually covered about 200 to 300 km a day, seldom going over 70 kph (45 MPH) in the well-loaded Jeep. They would then look for a room in a hotel or a private bed-and-breakfast (160K JPEG), since they had no reservations. Their second night was in Bordeaux and the next in Nantes (see the map, 70K JPEG.) 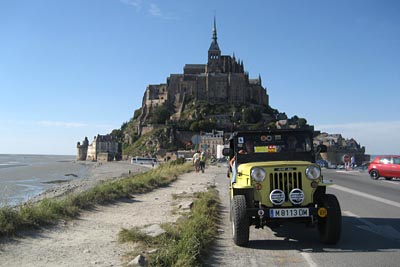 Destination for the fourth day was the incredible Mont-Saint-Michel, one of the most beautiful spots in Europe, and named one of the Top 100 Wonders of the World by travel writer Howard Hillman.

Mont-Saint-Michel was originally an island connected to the mainland by only a thin natural land bridge, which before modernization was covered at high tide and revealed at low tide. In 1879, the land bridge was fortified into a causeway, reducing the flow of water and gradually silting up the bay. At low tide the island is now surrounded by mud flats, but the French government has announced a huge project to turn it back into a true island by 2012.

According to Wikipedia's article on Mont-Saint-Michel, the island was fortified from Roman times until the 7th century, and the first monastery was built on the mount in the 8th century. The Dukes of Normandy financed the spectacular architecture added to the abbey over subsequent centuries, and it was used as a prison during the French Revolution in the late 18th century. 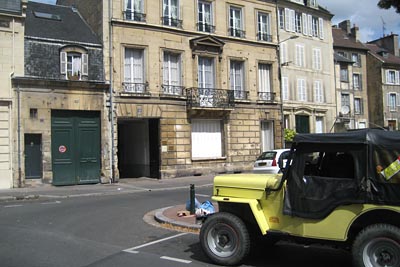 More recent history suddenly came into focus for the Garcias in the city of Caen, which is a transportation hub for Normandy, and was the objective of intense fighting in the two months following D-Day in 1944 (see Battle for Caen in Wikipedia.) This photo shows a building facade marked by scores of rounds from light weapons, but much of the city center was not as lucky, and was completely destroyed by tank fire and aerial bombardment. 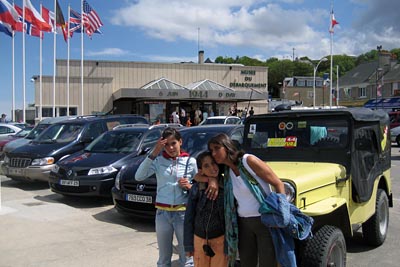 Of course Normandy is filled with museums commemorating Operation Overlord, and any pilgrimage to the spot where "jeep" first became a household word, would involve visiting the museums as well as the cemeteries and memorials. Marisa and the girls Charlotte and Blanca got a little tired, but they knew the chance to see these sights from a Jeep was important to Francisco.

See also the girls and the Jeep posing in front of a tank (160K JPEG) at a museum near Omaha Beach. 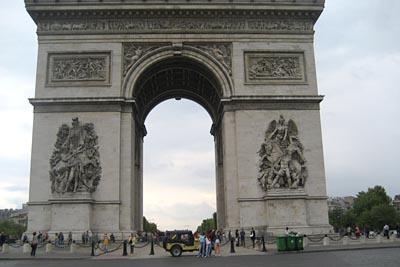 Once they had finished paying their respects to the soldiers of World War II, the Garcias headed for Versailles and then Paris, where Fransisco dodged the traffic to cross the street and take a once-in-a-lifetime photo of the CJ-3B under the Arc de Triomphe. The massive arch was built to commemorate Napoleon's military victories, and also houses the Grave of the Unknown Soldiers from the First World War.

Blanca took the camera so Francisco could be in the reverse-angle photo of the family with the Jeep and the Spanish flag (120K JPEG). 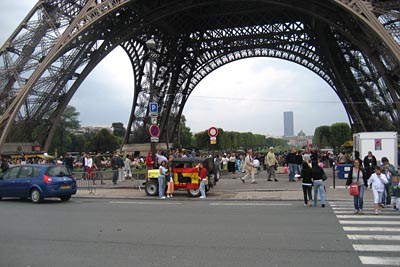 It was no small feat to take the Jeep through the center of Paris and get photos under not only the famous arch, but also what is probably the biggest tourist attraction in Europe, the Eiffel Tower. For this shot of the Jeep directly below the 1889 tower (and the tow-away sign) the girls brought out the flag.

The flag also soon proved useful inside the Jeep, when the cloudy Paris sky turned to rain and the soft top had a few leaks. 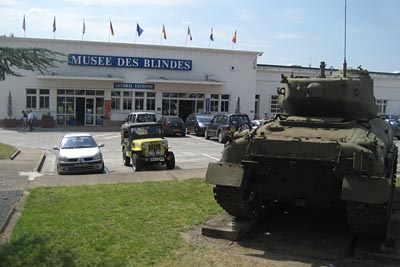 On the return trip, Francisco stayed further inland, and covered more kilometers per day. The route passed through Saumur, home of the Musee des Blindes (Tank Museum) which houses possibly the world's largest collection of some 880 armored vehicles. Francisco signed the guestbook on behalf of the Classic Willys Club. 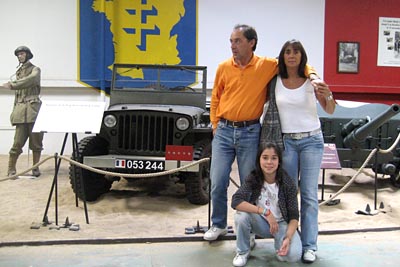 Blanca took this photo in front of the museum's replica of the jeep of General de Lattre de Tassigny, commander of the Free French army. The General was an interesting character who had fought against the German invasion of France in 1939, and then agreed to command Vichy French forces under German supervision in North Africa. The Germans discovered he was secretly organizing against them, and imprisoned him, but he escaped and led the Free French landing in southern France in August 1944.

The General's jeep had a platform between the front bumper and grille, for the General to stand on when addressing his troops. The replica was in fact built using a 1962 Hotchkiss M201, and the General's actual Willys MB is in the Army Museum in Paris. 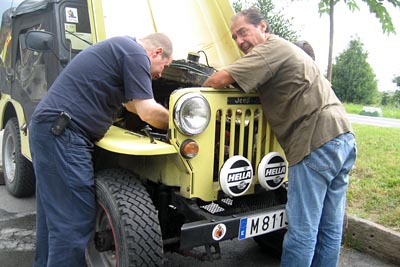 Jeep problems finally struck Francisco when the family was back inside Spain, and the water pump gave up in Hondarribia. Anticipating the problem, Francisco had brought a spare, but no sandpaper, so he used the pavement of the hotel parking lot (160K JPEG). After the successful repair there was great satisfaction (150K JPEG) and a couple of beers.

By the time they got home, nobody was thinking about taking photos, but the odometer told the tale -- they had covered some 7000 km (4500 miles).
Thanks to Francisco and his family for the photos. In the summer of 2008 Francisco was also one of the organizers of the Classic Willys Jeep Club's south-to-north flatfender tour of Spain. -- Derek Redmond

See the history of Jeeps in Spain on CJ3B.info.