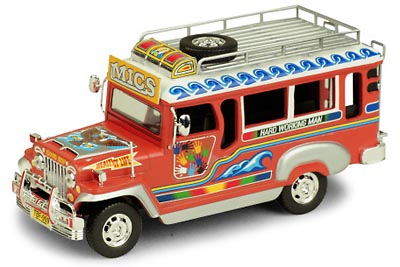 The most detailed model I've seen of a Jeepney of the Philippines, is from the 2002 collection of 1/43-scale models made in China for Altaya of Spain, called Taxis of the World. The models come with booklets about the prototypes, which have been translated into several languages. They have been distributed, one model at a time, through newsstands in Europe, and some are apparently still available online. The series also includes a Jeep Surrey.

Altays doesn't make it clear whether this model is based on a particular example of the ubiquitous Filipino jeepney, but the detail in the artwork and slogans suggests that it could be. See also a front view photo (30K JPEG). 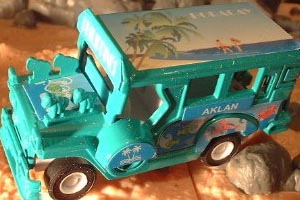 This little "Aklan" jeepney is one of a set of four souvenir jeepneys (80K JPEG) found by Keith Minor, each with an illustration of a different region of the Philippines. The toys are approximately 1/64-scale,and the back of each box (70K JPEG) includes a short history of the "Philippine Jeepney." 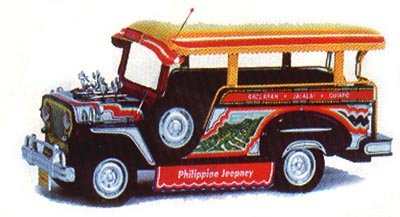 Here's one of a number of toy jeepneys which were available through Tatak Pilipino Koleksyon. This 8-inch long model came in several colors, and there were also smaller versions. See the full catalogue page (130K JPEG). As of 2003 this item is no longer listed on the Tatak website, although they do show a couple of other less realistic jeepneys in their Collectibles section.

Larry Ashkenaz took this photo of a jeepney model "madefrom volcanic ashes of Mt. Pinatubo, and produced by residents of Cabangan, Zambales." It's seven inches long, but only about 1/2-inch deep. It was purchased in Subic Bay, Philippines in 1995.

Mike Santoro came across this model. It's marked "Philippine Jeepney, Promite model 1-80", and like the real vehicle it's based on, the model is made in the Philippines. (See also a front view photo, 20K JPEG.)

Thanks to Jon Paulsen and Duncan McInnis for information for this page. -- Derek Redmond