In 1953, Mitsubishi Heavy Industries in Japan became the first overseas manufacturer licensed to build their own version of the Willys CJ-3B. Their CJ3B-J3 was very successful, and in 1955 they took the initiative to begin making longer-wheelbase variants. Then in 1958 they introduced the JC3 which had a diesel engine.

Although Japan drives on the left side of the road, it was not until 1961 that Mitsubishi added right-hand-steering to their Jeep lineup, with the J3R. This made them more competitive in exporting, since much of their potential export market in Southeast Asia and Australia also used the left side of the road. All of the short (80-inch or 2032mm wheelbase) variations of the Mitsubishi flatfender stayed in production into the early 1970s. 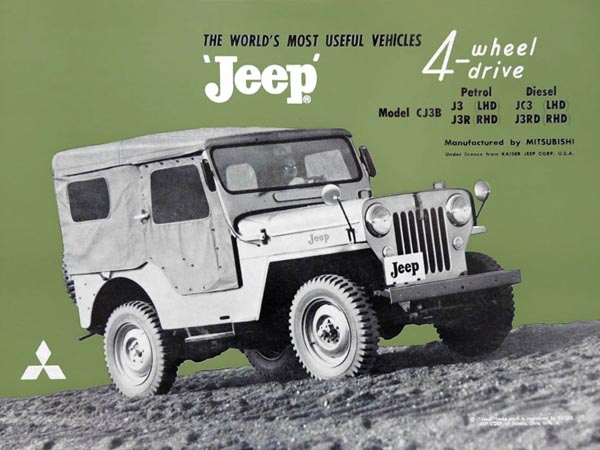 This folding booklet for the CJ3B-J3 family is one of the few Mitsubishi Jeep brochures printed in English rather than Japanese. It's their equivalent of the Willys-Overland Export brochures, aimed at an overseas rather than domestic market. Australia may have been a particular target, and the brochure lists right-hand-drive availability right on the cover.

The brochure dates from sometime between 1961, when RHD was introduced, and 1971 when the diesel versions were discontinued. 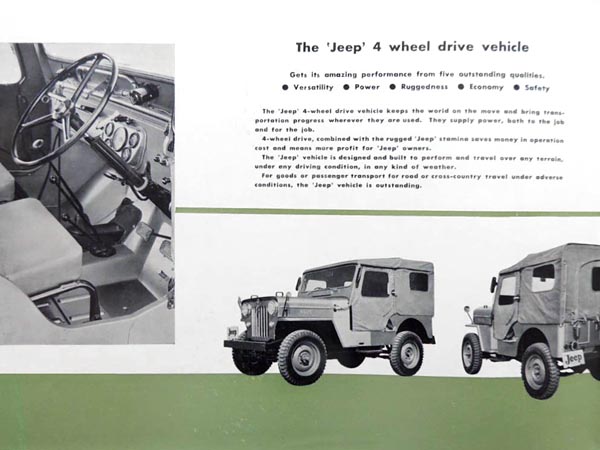 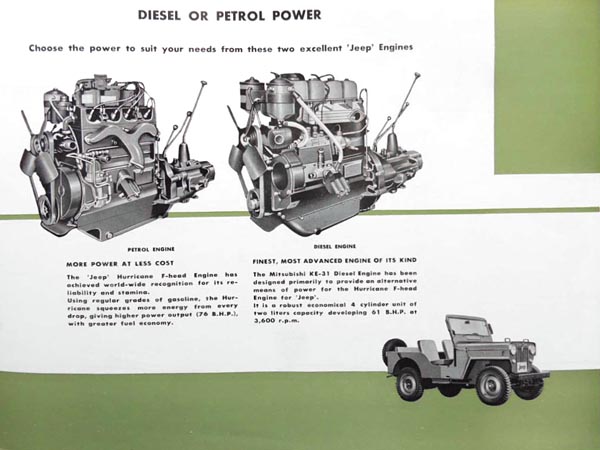 The KE31 diesel is clearly designed to fit easily in place of the Hurricane engine.

The diesel version of the Jeep is the one tested by the U.S. Army in 1966, and it's interesting to speculate whether the Olive Drab color scheme of this brochure was partly intended to appeal to potential overseas military buyers. Mitsubishi did have a military J4 version, but Japan's pacifist government after World War II discouraged the export of military hardware. 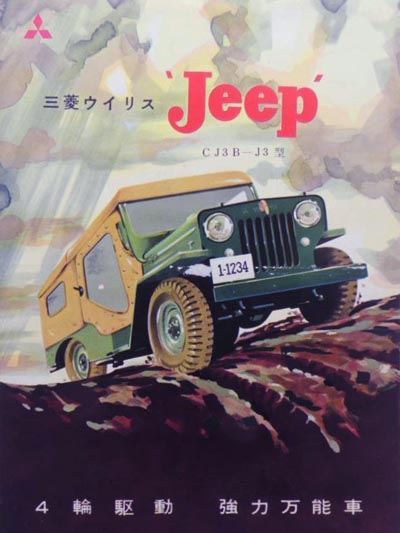 The above export brochure is quite restrained in its one-color design, similar to much of Willys Motors' advertising of the 1950s and early 60s. On the other hand, much of Mitsubishi's Japanese-language advertising was very colorful, and filled with lively illustrations.

But surprisingly, this domestic folder portrayed the J3 in Olive Drab on the cover (and the same is true of another CJ3B-J3 Brochure on CJ3B.info.) This may have been an attempt to attract Japanese civilians who had dreamed of owning one of the MBs driven by American military personnel all over the country after the war.

These full-color booklets apparently date from earlier than the export brochure, since they don't mention the diesel JC3 (introduced in 1958.)

The pictures inside illustrate a much wider variety of paint schemes. See a page of specifications in Japanese (110K JPEG). 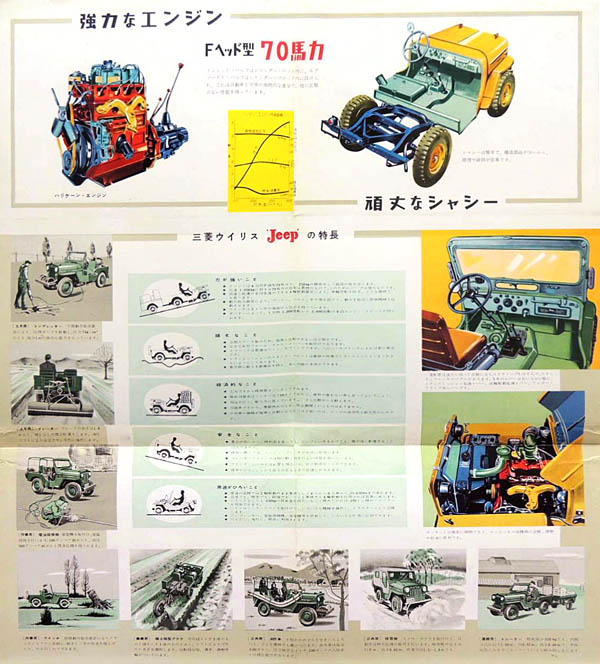 The multicolored Hurricane engine and Jeep are imaginary, although the bright yellow was in fact a popular Mitsubishi color.

For this publication, the Japanese company also borrowed an idea Willys frequently used in its advertising -- little pen and ink sketches of Jeeps demonstrating the wide variety of tasks the vehicle could handle. 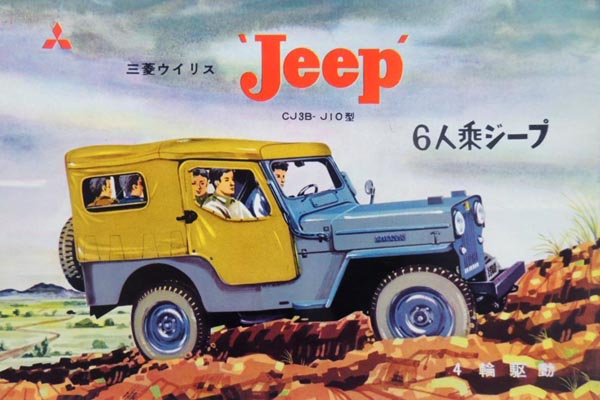 The first variant of the Mitsubishi high-hood was the CJ3B-J10, with a slightly longer wheelbase (87.5 inches or 2225mm) and a bit more overhang at the back. It was frequently shown in advertising carrying six people. 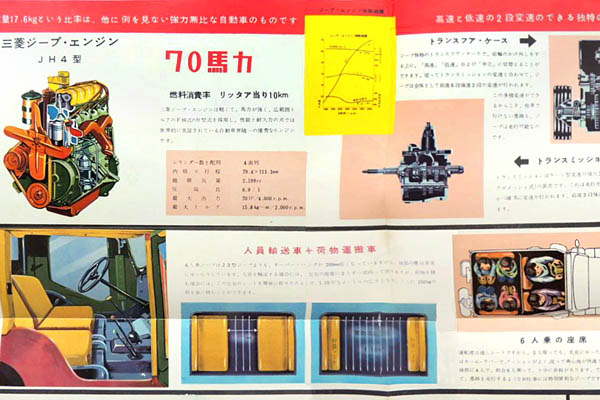 Detail pictures of the J10 include the folding rear seats holding four passengers, although they appear to be children. There is also a fair amount of technical detail including the gearboxes, a graph of horsepower versus RPMs, and an engine cutaway showing the overhead valves. 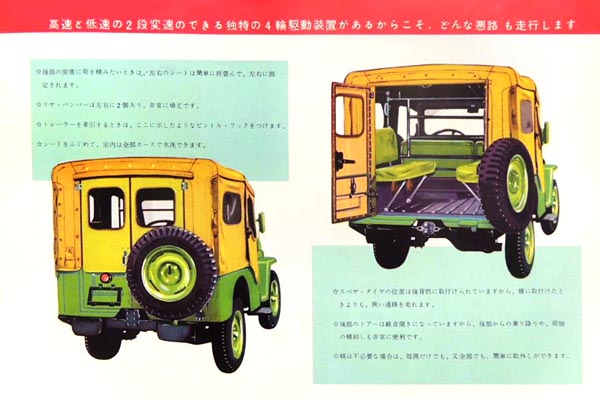 Rear views emphasize the seating and the swinging doors. The J10 still had a canvas top, but in 1956 Mitsubishi would begin making models with a steel roof. 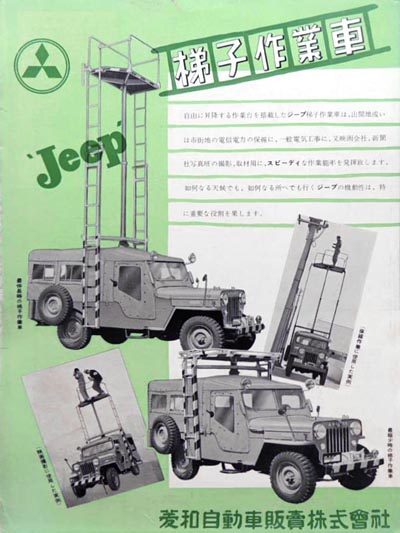 The large number of Mitsubishi models gets confusing. (See a new reference chart of all their civilian models, at the bottom of Mitsubishi Jeeps in Japan on CJ3B.info.)

These platform tower Jeeps appear are possibly a soft-top version of the CJ3B-J11, which had a long, 104-inch (2642mm) wheelbase and typically a hardtop, station wagon body. Looks like they also have body extensions added at the rear. It would be nice to have some detail photos of this mechanism! 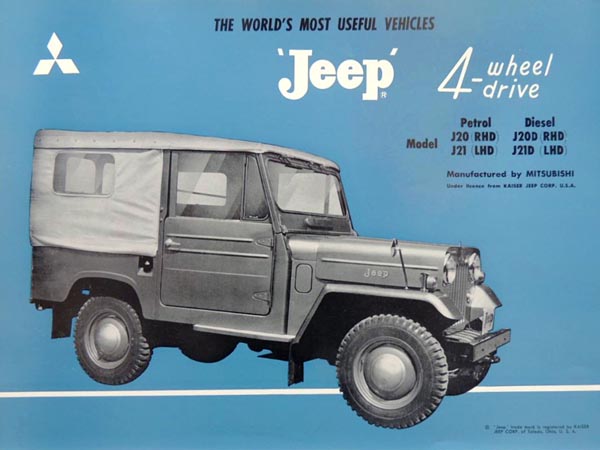 Replacing the medium (87.5") wheelbase CJ3B-J10 in 1960 was the J20, and for this model the CJ3B prefix was dropped. This was the first Jeep with the new dog-eared front fenders, imitating the look of the round-fendered Willys CJ-5, without having to re-do the whole front end. But the short wheelbase versions kept their flat fenders into the 1970s. 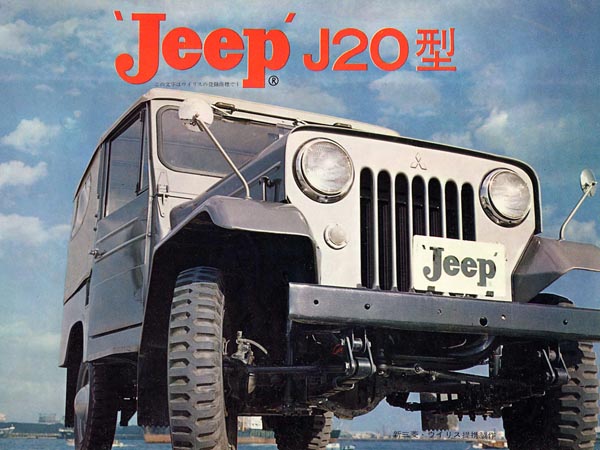 The blue J20 folder in English above is a companion to the Olive Drab export folder for the J3. The more dramatic Japanese-language brochure here has a cover photo that was perhaps meant to show off the new look, but actually emphasizes the classic appeal of the high hood. The J20 also came with steel doors. 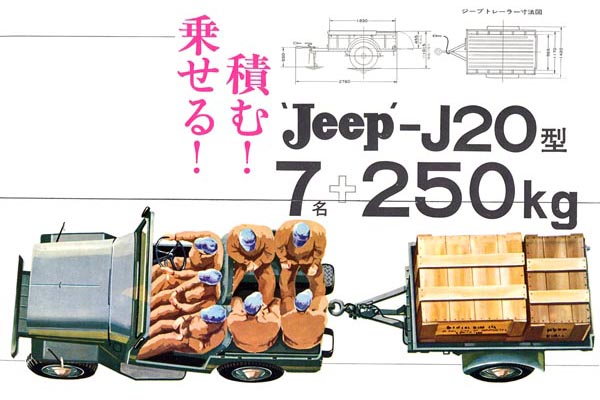 The optimistic estimate of the passenger capacity in this 87.5" wheelbase Jeep had now increased to seven adults. 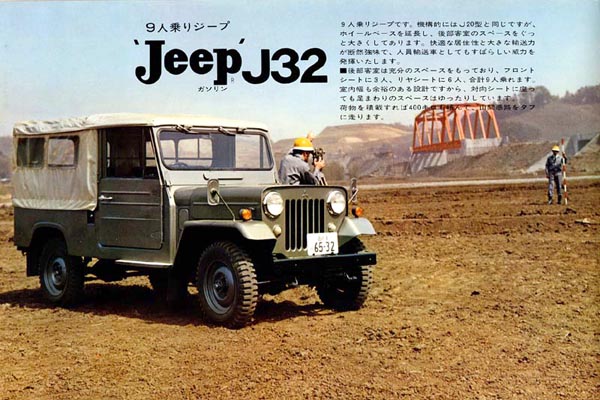 The J20's redesign led to many other models in the J30, 40 and 50 series, including this 104" wheelbase J32. There were hard and soft tops, various gasoline and diesel engines, and extensive mechanical changes until the last Jeeps finally went out of production in 1998. But the Mitsubishi Jeeps all kept the high hood and radiator guard inherited from the CJ-3B.


Thanks to Steve Kreisher and Makoto Hirakawa. -- Derek Redmond