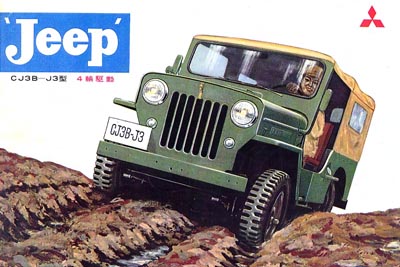 Here are some illustrations from one of the most colorful Jeep brochures I know of. It wouldn't be hard to beat most of the somewhat drab black & white Willys promotional material of the CJ-3B era (see CJ-3B Literature). But this Mitsubishi pamphlet promoting their CJ3B-J3 is probably as splashy as anything from the heyday of Willys advertising in the 1940's, or the 1959 blitz for the Jeep Gala. 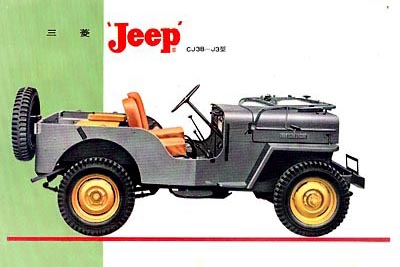 I've always liked this brochure, with its fanciful hand-tinted illustrations. This picture was used as a cover photo for CJ3B.info back in early 1997. The gold-plated exhaust manifold in this Hurricane engine illustration is a nice touch. 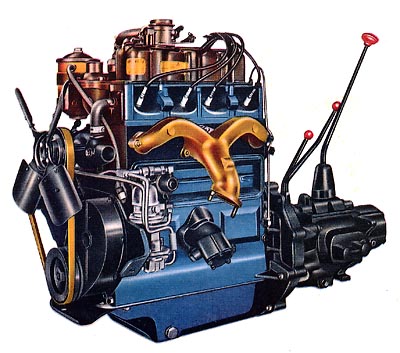 It's hard to date this publication, since the CJ3B-J3 was in production in Japan from 1953 into the early 1970's. But there are a couple of other J3 brochures which appear to be earlier, so I would assume this one is from sometime in the sixties.


The photo spread below is a nice summary (with few words necessary) of the Universal Jeep's abilities on various grades and terrains, and the range of special equipment available. See a larger copy (220K JPEG). 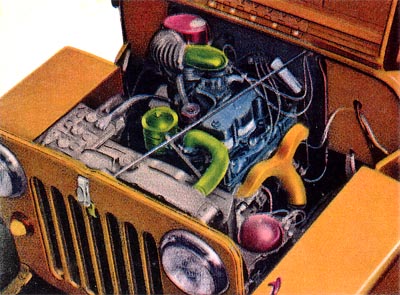 If you were thinking that maybe Mitsubishi did paint the Hurricane engine blue and the exhaust manifold gold, this picture is probably the one where you draw the line. These artists were just having fun. But note that they did work pretty hard to realistically tint all the photos in the spread above. 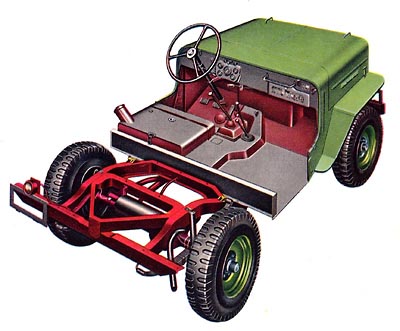 Here's a unusual view of the CJ-3B frame and body, with part of the tub cut away. This may be pretty close to how cab/chassis versions were delivered from the assembly line, for conversion to specialty vehicles such as the Mitsubishi J32 fire engine (30K JPEG).

Note that Mitsubishi still retained the early-50's style instrumentation, but had taken the practical step of adding a glove compartment, something that Willys never bothered with on the civilian flatfenders.

And even the usual underside view of the mechanics of four-wheel drive and the cutaway diagrams of the drivetrain components, take on a new look with the addition of color (below). See a larger copy (160K JPEG).

Thanks to Makoto Hirakawa for scanning the brochure. -- Derek Redmond

Return to Mitsubishi Jeeps on CJ3B.info.