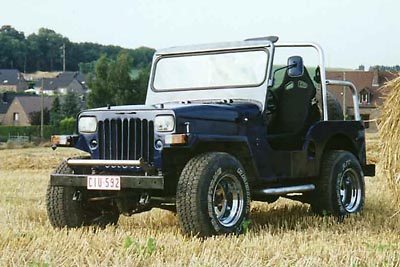 This slick Jeep painted in BMW metallic blue is a real-life example of the Mahindra Bahia, manufactured in India and apparently assembled in Greece for the European market. This version of Mahindra & Mahindra's CJ340 was an attempt by the Indian automaker to bring American Motors Corporation's rectangular Jeep headlights, to the world market. (See Updating the High Hood for the 1990's.) And this is the first time I've seen one outside the pages of Mahindra sales brochures.

Owner Guy Lecocq says, "It's a '91 model, with an Indenor XD-90 diesel engine. It was imported officially into Belgium in 1991, and I bought it in July 2001, from the first owner. I immediately saw there would be a lot of work on it, but the price was right, so I decided to buy it. The car had been repainted by its owner (with a brush!), the seats had been replaced by a... wooden seat (!), the stock wheels were rusted, there were about a hundred little holes all over the car... but the frame was like new. The engine was almost perfect (53,000 km), except for a significant oil leak which I repaired." 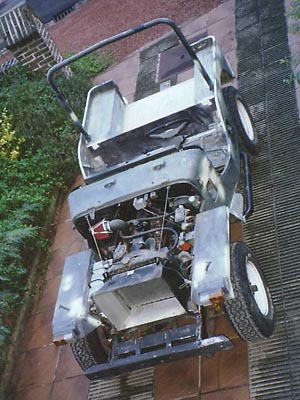 "I first decided to remove the home-made paint. Under it, I discovered that the car was grey and dark green. I made my choice on a metallic blue ("Avusblau" from B.M.W.) I painted the car myself (first experience!) in my garage. The result is not 100%, but far better than the old paint."

See a photo of the Jeep in Guy's garage ready for painting.

Note that the hood and grille of the Mahindra Bahia (removed in the photos) are fiberglass -- another interesting experiment by Mahindra. 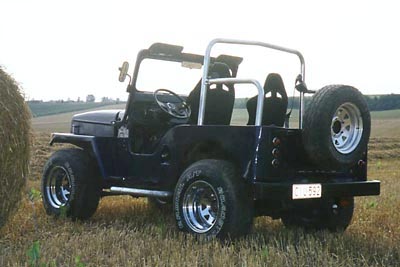 "I bought 2 new SPARCO competition seats, and new wheels (10x15 chrome 'Modular' wheels with 31x10.5 tires). I am now searching for a complete soft top, because winter is coming and I only have a bikini top!

"In Belgium, one finds NO parts for Mahindras. They were only sold here briefly at the beginning of the 1990's. I find some mechanical parts from Peugeot or Ford (Granada). I live in Aywaille (a small city between Liege and Luxembourg), but I work in Liege. If you don't know, Liege is located between Brussels and Cologne (Germany)."

Thanks to Guy for the photos. -- Derek Redmond