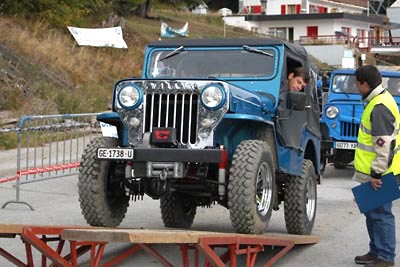 September falls in betweeen the peak summer golf season and the winter ski season in the hugely popular resort area of Crans-Montana in southwestern Switzerland.

Since 1997, a group of Jeep owners have chosen September for an annual get-together known as Jeep-Heep-Heep. It attracts Jeeps from German-speaking and French-speaking areas of Switzerland, as well as France, Italy and Germany. Lots of good-looking CJ-3Bs are always in attendance; check out the grille treatments on the two examples in this photo of the balance competition. 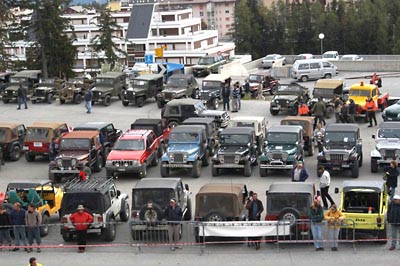 Close to 200 vehicles including Willys MB's, Grand Cherokees and almost everything in between, showed up for the 2004 event. Not as many Willys pickups and wagons as you would find in North America, but check out the yellow wrecker in the larger copy (110K JPEG) of this photo of the show-and-shine in the Crans-Cry d'Er parking lot.

The Swiss Army bought hundreds of Willys CJ-3Bs, and many of the surplus Swiss Army Jeeps have been sold in good condition. Add a few Hotchkiss Jeeps from France, or Spanish VIASA 3B's from Italy, and you get a larger group of high hoods together than would ever likely happen in North America. Here are some of the examples from Jeep-Heep-Heep 2004. If you recognize any of the owners, let us know.

The next edition of Jeep-Heep-Heep is scheduled for the weekend of 24 September 2005 in Crans-Montana. For everybody west of the Atlantic, we hope to get some photos. Many of the same Jeeps you see here will probably be back, plus some new ones.

Thanks to the photographers who took the photos on this page, of the action over the last few years. There are lots more on the Jeep-Heep-Heep website if you want to check out some of the other models in attendance. -- Derek Redmond

Also on CJ3B.info, see some of the history of the Swiss Army Jeeps.