Yugoslavia, a collection of small republics along the east coast of the Adriatic Sea, became a Communist nation after World War II, but independent of the Soviet bloc. In the early 1950s President Josef Tito's Yugoslav National Army was built into a massive force of half a million soldiers, as he feared an invasion by the Soviet Union. Relations between the two countries improved after 1955, and the size of the army shrank by more than half.

When the USSR invaded Czechoslovakia in 1968, Yugoslavia again wanted to beef up its defenses, but couldn't afford a renewed conventional military buildup. It turned to the concept of decentralized reserve forces, which could fight a mobile and guerilla war in every part of the country (Total National Defense in Yugoslavia, 1971.) Jeeps would clearly be a necessary element in that strategy, and Yugoslavia apparently purchased CJ-3B Jeeps directly from Mahindra in India.

The country later dissolved again into a number of smaller countries, starting in the 1980's. Slovenia, at the northern tip of the former Yugoslavia, is where the Mahindra Jeep seen here was found by Mihael, who has been working on a rebuild since then. -- Derek Redmond 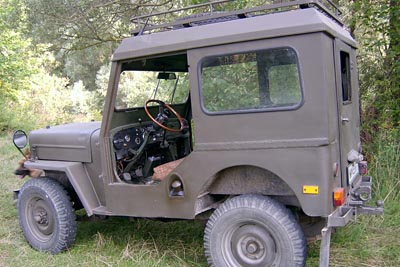 I bought the Jeep near Metlika, Slovenia in 2007, from a guy who had already done some restoration, but things had to be repaired. Shortly after I bought it, the rear axle had to be changed because it broke and rear-wheel-drive was no longer possible.

Fortunately the 4WD worked so the Jeep was still able to be driven, so I with some help of my mechanic could repair it in his mechanic shop. Then the front left spring broke because it was welded together, and of course both of them needed to be changed with new bolts and so on. I must say that as I was working on these repairs, lots of CJ-3B Bulletin Board members helped with tips and knowledge, and it was really a big help. 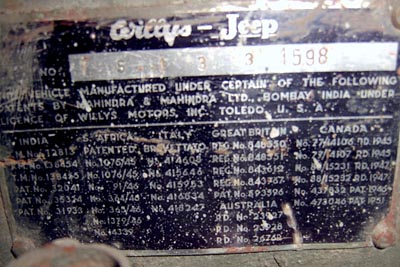 The vehicle's documents of registration are dated September 1966. The CJ-3B was used for transportation of troops and a small trailer with maximum load of 435 kilograms. The vehicle was also used for field reconnaissance, and as a command vehicle. 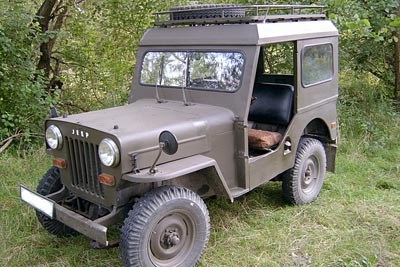 I was thinking the hard top was homemade when I bought it, because it looked like someone didn't do a nice job of putting it together, and like it all was made in some garage. (Well, if you look at the standards for the Russian military vehicles you will get the picture of what I'm talking about -- "doesn't have to be pretty but it gets the job done".) 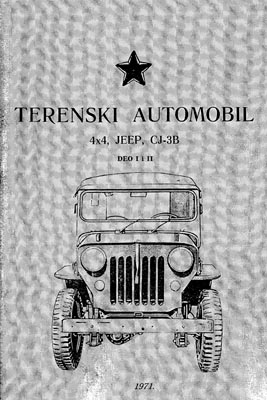 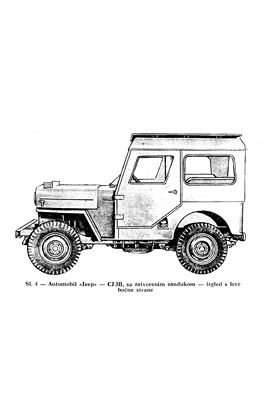 I fortunately made a purchase of an old manual issued by the Yugoslav National Army in 1971 for the vehicle, and found that the exact vehicle as mine was used in the armed forces.

Note: see more drawings from this manual on CJ3B.info.

I found the manual reprint on the internet, and I think it was translated from an original U.S. one, with some additional things for the army. I was amazed that this model was really used by the former Yugoslavian armed forces, and this made it even more historical for me if I can put it this way, because all army Jeeps have their story. Of course when you start working on a Jeep it grows on you as more than a hobby -- it becomes a project of restoring a piece of history in the garage. 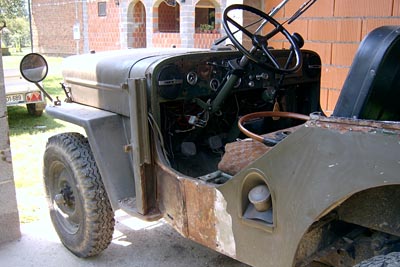 Pictures from the manual look identical to my vehicle, so it's very rare to have one of those I guess, but I decided to take the hard top off because it was too heavy and in corners the Jeep was becoming slightly unstable. The hard top was made from steel plates, not from aluminum -- especially the doors were heavy like a tank hatch. That can be a weight problem regarding the height and small width of the vehicle when it comes to slopes.

I decided to rebuild it into a soft top with the original parts from Willys from that era as much as possible, and some can still be found in this part of the globe. Collectors say it's a copy, not an original Willys, but it does the job as well as the original. 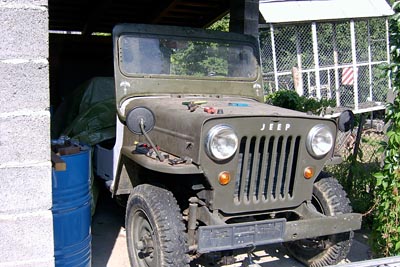 I have lots of the replacement parts to rebuild it, but they are stashed in boxes and I'm waiting to put them on the Jeep as funds allow. Some found here, some ordered from the USA, and you can imagine the postal fees for the weight. I was thinking of selling it, but couldn't -- I guess you understand why it grows on you, as I said.

I began bodywork (100K JPEG) in 2010, and have a lot more to work on. Last of the failures was the old generator -- I had to replace it with an alternator and work on other electrical parts too. I'm slowly bringing my Jeep back to its old shape, and hoping to see it run as new when I finish it. 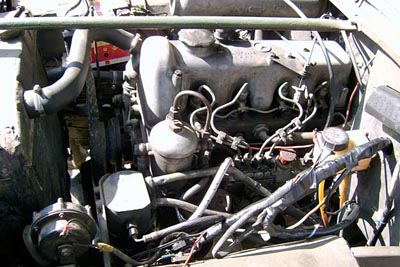 The engine was 4 cylinder, 75 HP, but was formerly replaced with a Mercedes-Benz 1.9 50 HP diesel engine (from Mercedes-Benz 123 series) because of lower fuel consumption. (Regarding the prices here today, it was a very smart decision.) The thing with putting in the diesel engine is, someone didn't do a wery precise job, so now I have to repair some things. Like the oil pump was attached to the fender, and that was a crazy thing to do because the housing is very heavy. 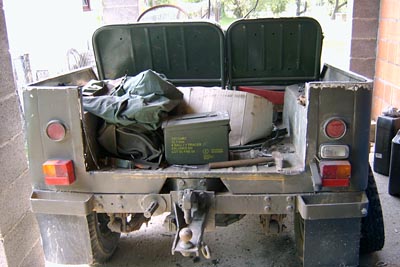 All other features were as in the original but one part that was taken out and was not found, is the PTO for this vehicle. In the rear of the vehicle there is still part of a PTO unit -- I guess it was for the trailer. I don't really have another idea, since it was a military vehicle. 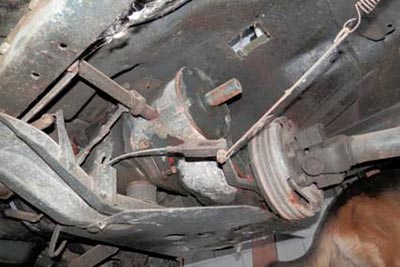 I bought a new PTO (50K JPEG) from the U.S. but will see how to put it to work, because of high prices here for parts. I may decide not to fully restore that part, but it could be very useful on a farm. I'm more interested in what was there before and what it looks like. Here's a photo of the transfer case, and it is seen that something is missing, but I dont really know what type of a PTO it was -- it would be nice to know.

Hopefully this year I will finish the project and I look forward to posting the result here. Progress is going slow but it will be finished. -- Mihael

Thanks to Mihael for the photos and story of this unusual Jeep. -- Derek Redmond