The 1987 YJ Wrangler (which debuted May 13, 1986) was the first modern Jeep not built in the AMC Toledo plant, but instead in the factory in Brampton, Ontario. Some 570,242 YJ's were eventually produced by Chrysler (who took over AMC in 1987) in both Brampton and Toledo, through 1995. No Wranglers were produced in 1996 (possibly a tribute to the passing of the YJ?)

The stock YJ was a bit lower and wider than the CJ, and had an improved suspension and steering, for better street performance. Extreme off-roaders also found it an excellent platform for modification. Notable cosmetic changes included new front bodywork with rectangular headlights, and an upgraded interior. 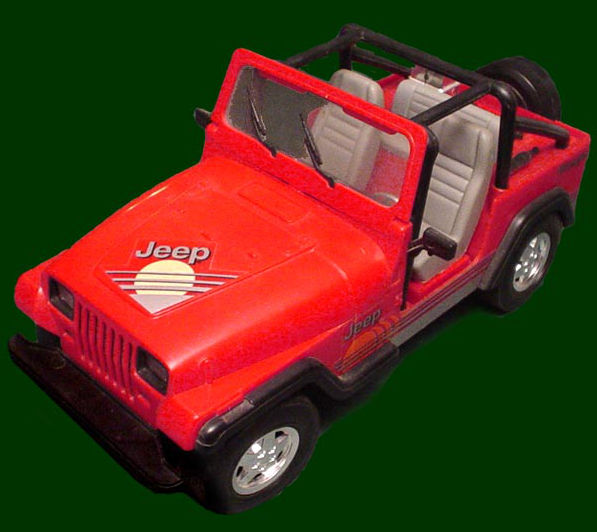 This big plastic toy Wrangler was made in China starting in 1989 and was sold under the name "Toy State" by Eaton's in Canada. It's 11.5 in. or 29 cm long overall (approximately 1/13-scale) and has wired remote control speed and steering, lighted headlamps, and Islander graphics. See a rear view (50K JPEG) showing the rollcage and details including jerry cans and tools. The packaging (120K JPEG) has instructions and nice illustrations including the companion Comanche truck. 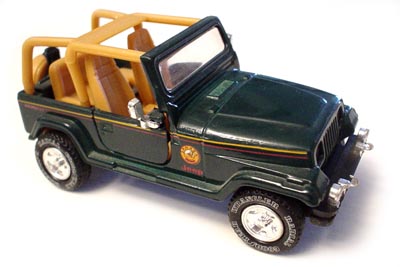 The most popular and possibly the best YJ casting is the 1/43-scale Road Champs series. As of early 2003 there are seven variations of this casting. The most notable is the 1994 Hunter Green Sahara version, with the Sahara logo on the sides and on the spare tire (see a rear view photo, 60K JPEG). The model has opening doors and folding plastic seats.

Other early issues in the series were a red version and a blue wave Islander (100K JPEG).

A later "Bigger is Better" re-issue of the red YJ (90K JPEG) had a "Road Champs" decal added on the door. The light green "St. Paddy's Day" version, and the dark green Car and Driver Bug Tracker (70K JPEG) are more recent issues prior to the 2002 metallic blue 60th Anniversary version (40K JPEG.) 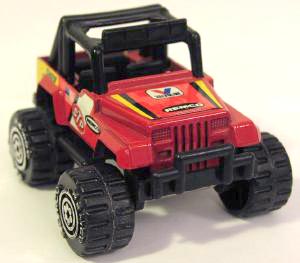 The original YJ toy was issued in 1987 by Remco. The body is not as true to the YJ as some of the later YJ toys, but the square headlights are unmistakable.

There are several variations in color and decals for this Remco casting. There is a red, green, orange, white NASA, and possibly a black version. These later versions have the trademark grille redone (obviously to avoid infringement on the "Jeep grille"). 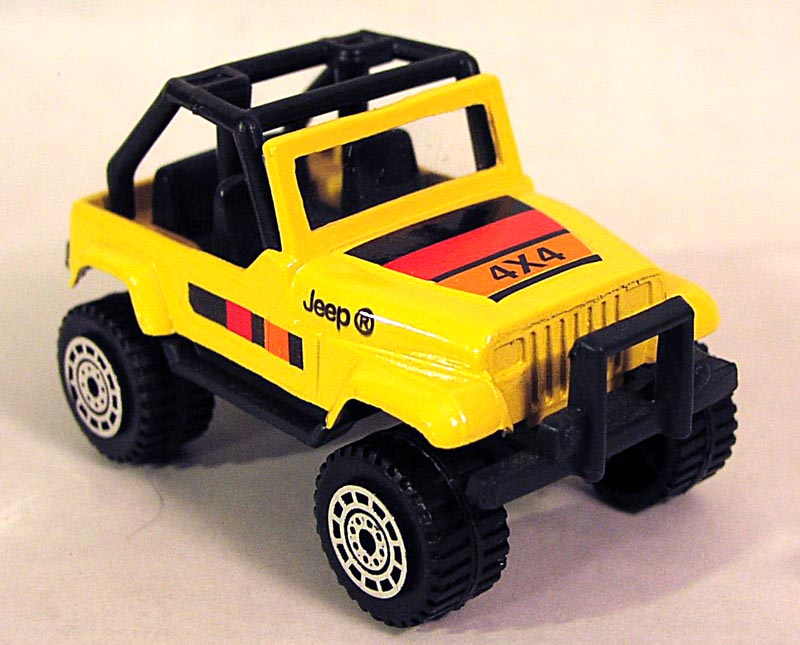 Tootsietoy issued quite a few YJ toys of several different scales, some diecast and some plastic. This 1/43 yellow YJ is noticeably similar to the Remco.

The slightly larger 1/32 "Mudhawg" YJ's (40K JPEG) were also diecast. They came separately or in a set with a tow truck, and had raised square headlights. 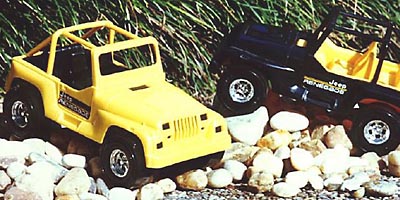 And these Wrangler Renegades are even bigger, about nine inches long. They're plastic rather than diecast, but then again the original Renegade YJ's did have "plastic" body trim to give the unique style.

Yellow was clearly a more popular color with Tootsietoy than it was with buyers of full-size Wranglers. 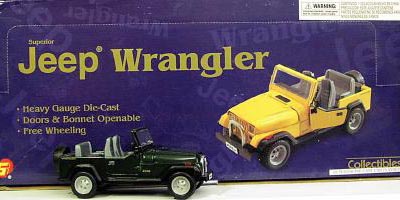 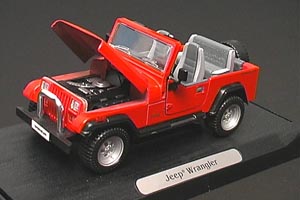 The Superior casting was reissued under the name Secuda, available in at least the red and green versions, with or without a molded plastic soft top (40K JPEG). The Secuda models were mounted on a plastic display base and sold in individual packaging. See also a rear view photo (40K JPEG.) 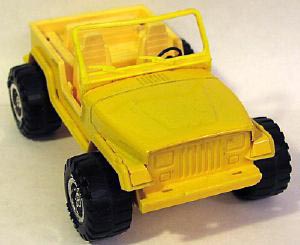 Nylint got on the yellow bandwagon with its 1:25 YJ. There is also a red version (60K JPEG) and likely other color variations. The toy has a pressed metal body over a plastic base, grille and interior. Accesories include hardtop, grille guard on the front, and spare tire and jerry cans on the rear. 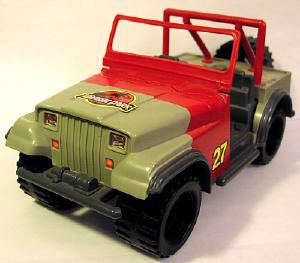 One of the most famous YJ's is of course the Jurassic Park movie version. (Personally, I like the Sahara YJ from Grumpy Old Men better! It may have something to do with Ann-Margret driving it, however?)

This plastic toy, approximately 1/12-scale, was sold by the Kenner division of Tonka. See more details on the Jeeps in Playsets page. 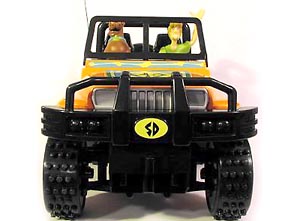 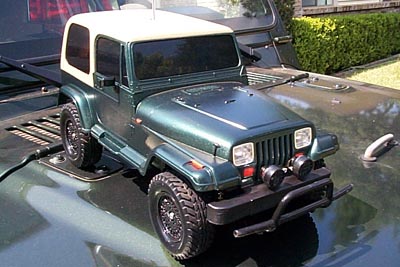 Tamiya also released a 1/24-scale plastic model kit (with the same illustration on the box.)

Note: Mike Albright, whose own Wrangler inspired him to create this page, died in 2013 -- see Jeep Lives Lived on CJ3B.info.

Thanks to Duncan McInnis. -- Derek Redmond