To paint or not to paint?

A discussion on the old Jeep Toys Bulletin Board revealed a variety of opinions in response to a question about restoring old Tonkas:

Bart: "Regarding refurbishing Tonka Jeeps: as you know some Tonkas are quite valuable and some are becoming valuable. Probably the worst thing a collector can do is to attempt to refurbish a beat up Tonka by removing rust, repainting, etc. Refurbishing will almost always reduce collector value considerably. Refurbish for display or use as a toy, but understand it will become almost worthless as a collectors item." 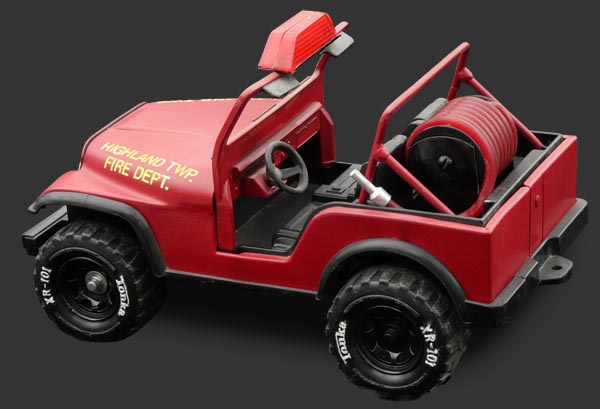 Pete: "Sure, I understand on a model that is hard to come by, or worth a lot as is... but over here in the UK, Tonka models such as the ten-inch army Jeep and its smaller brother are ten a penny. They're everywhere, so if you get a beat-up one you can have a load of fun stripping it down and re-painting it as a Surrey Jeep or whatever. Likewise there are shed loads of models out there that are fun to strip down and fabricate parts for, etc. etc. Or this could just be my profession coming out here..."

Jarek: "Bart, you are correct. A rare model is reduced in resale price by a repaint. The exception to this is of course, as Pete has mentioned, a common toy that is in rough shape. I myself may be biased here, as I too refinish old Jeeps that I have in mint condition also. Usually I will have a rough condition toy as a filler in the collection, then when a mint one comes along, the old one is only worth the buck or two I paid for it in the first place. I enjoy using new releases of old castings such as the Speed Wheels for the Yatmings, to replace missing hoods or windshield frames. The completed toys are still not worth more than the buck or two on the market, but I enjoy displaying them in my collection. I will either finish them to the OEM colour specs, or paint it to resemble my own Jeep. As always, to each his/her own. Whatever makes it fun for you."


The Project: A Fire Jeep

After reading the above comments, and noting how it's getting more expensive to buy old toy Jeeps in good condition these days, I decided to have a shot at refurbishing a rusty one -- invest some time in creating something myself, instead of investing time checking out endless flea markets looking for a bargain. 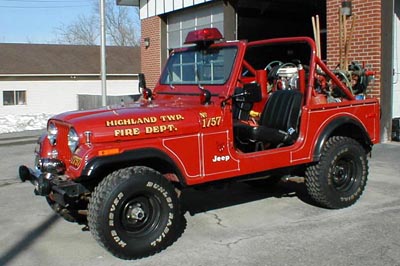 I've done a bit of repair work on toys before, such as the replacement of a missing windshield. But this was my first shot at creating a unique model of an interesting prototype, starting with a rusty Tonka CJ-5.

I decided to do a model based on this 1985 CJ-7, which belongs to the Highland Township Fire Dept. in Highland, Michigan. (See Jeep CJ-7 and CJ-8 Fire Engines.) 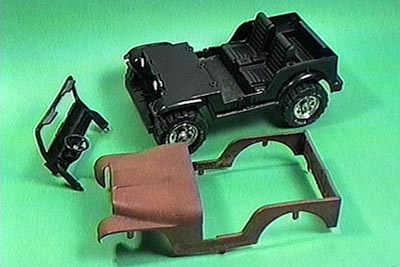 Removing the metal body tub from the plastic base required only bending 10 small tabs. The tub was covered with surface rust which I wire-brushed and sanded lightly, but it had very little wear and tear otherwise. The plastic chassis and interior seemed in good shape as well. One end of the front bumper was broken off, and I later glued on a piece of scrap plastic to replace it. 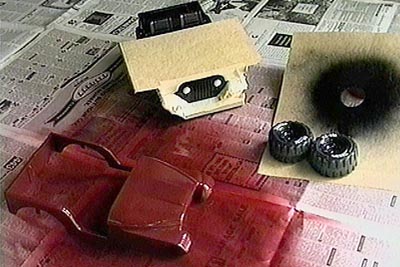 Since I hadn't sanded it down to bare metal, I used a rust paint to spray the body red. Painting the plastic windshield and grille red to match my prototype was a major departure from the original Tonka practice, which kept the plastic parts black and painted only the metal tub.

The tires were masked with a circular cardboard cutout, and the chrome hubs painted black. I touched up the raised lettering on the tires with a white brush. 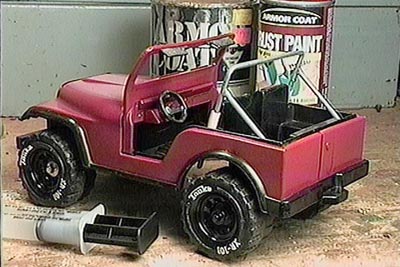 There were holes in the right places, so I decided to add a roll bar made from steel wire. I epoxied the rear braces on at the correct angle while holding it in place temporarily with masking tape, so it could be removed for painting red.

The rusted axle ends were cut off the front axle, and the new chrome axle caps were left unpainted to represent the prototype's locking hubs. 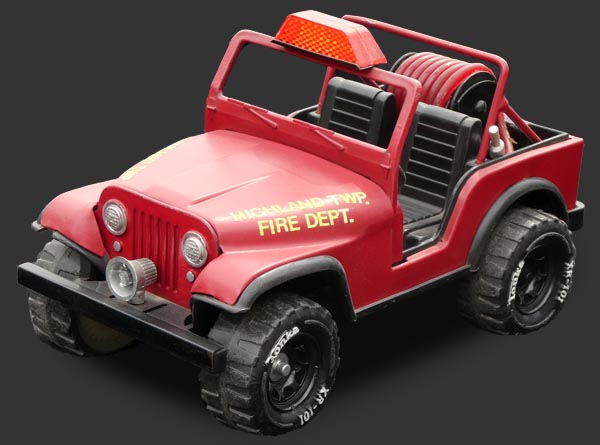 Other details added to the model came mostly from the scrap box. A terminal cap from a 6V battery became the siren, and the light bar was made from pieces of a bicycle reflector. I used stick-on letters (left over from before the days when I started using the computer to make labels) painted yellow, and made the hose reel from a piece of plastic jump rope on a spool.

For a two-evening project, I'm quite pleased with my one-of-a-kind model. -- Derek Redmond

See also a Tonka CJ-5 Repainted as a Renegade and Modelling a Canadian M38A1.

There are more Tonkas on the Toy Jeeps Pages.