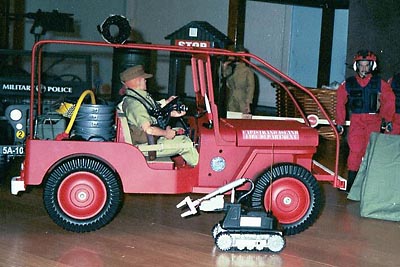 This custom model using a GI Joe Jeep, is the first of a couple of fire Jeep models built recently by Tim Kano of San Juan Capistrano, California, in 1:6 scale. This brushfire Jeep model was based on a surplus military M38 which was itself converted for the fire service. 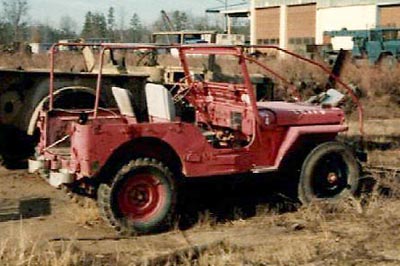 GI Joe modeller Tim Kano says, "My best friend took this picture of what looked like a converted M38 Jeep, in the mid-1980's in a storage yard in South Carolina. I have a love of Jeeps that dates back twenty years ago when I owned and worked on real Jeeps, mostly WWII vintage GPW's." 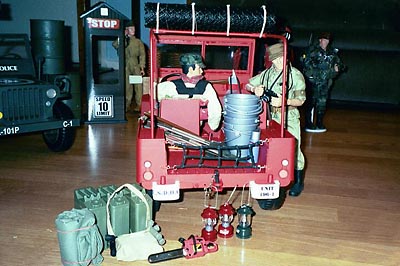 "My personal interest now is collecting WWII-oriented figures and vehicles in 1/6th GI Joe scale. Hasbro put out a GI Joe accessory pack of smoke jumper gear, and to me it looked just like the gear the brush fire fighters wear out here in the western US, and that inspired me to try this custom Jeep.

"I used an old 1970's Hasbro Adventure Team Jeep. It had been pretty beat up, but I repaired the damage which included a missing bumper, one missing bumperette and some smaller body damage. I painted this one with flat paints." 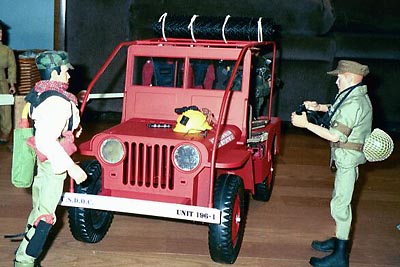 "I belong to an online collectors group called "Flash Force" which is animaginary 1/6 scale government organization and I marked my vehicle for this imaginary outfit.

"A lot of GI Joe collectors are fire personnel and after conferring with them it was thought the pipe cage was covered with chainlink fencing to protect the occupants from thick brush or tree branches. This chainlink was rolled up while driving on the road."

Thanks to Tim Kano for the photos of his model. -- Derek Redmond