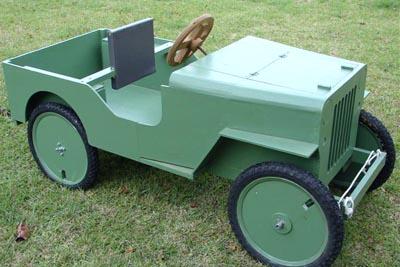 Barry Pfister in South Africa writes, "I have just finished a large pedal Jeep and my son is quite happy with it. It was very roughly based on A Jeep For Junior (50K GIF) from Popular Homecraft magazine.

"I could not find all the parts and have always seen plans as 'guidelines' so things soon got out of hand. 16" BMX rims were used as wheels; the rest is 1/4" and 3/4" plywood. I did not base it on any particular model, just used the 'eyeball mk1' method. Length is 142 cm (56 inches) bumper to bumper; width and height are both 62cm (24 inches). Strange how that worked out." 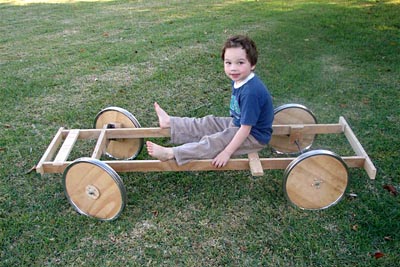 Barry apologizes for not drawing any plans, saying, "My wife gets most upset with me when I cook as I don't use a recipe and can never replicate the dish again; the same goes for my workshop. I worked around the rim size, looked at pictures on CJ3B.info, worked out semi-scale dimensions and got it all wrong when I put the tires on! You can see the effect on the back wheel arches. Thankfully the kids were not around when I fitted them as their vocabulary would have been enriched!"

For this article we produced a frame drawing (90K GIF) that can be used as a reference for the basic dimensions and the front wheels mounts. 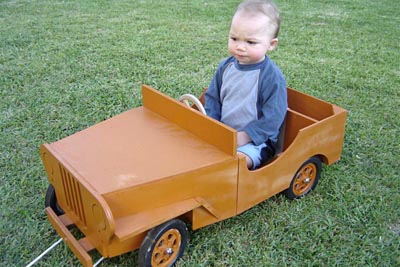 Previous experience building a smaller pull toy from plywood convinced Barry he could do a larger self-propelled version. He comments, "The first pull-along Jeep went down well until I tired of having to be the engine." 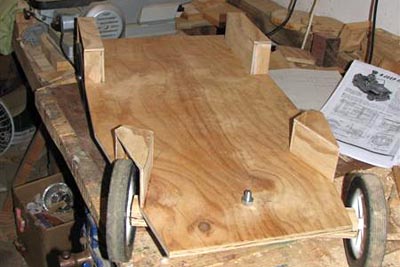 The same rear wheel enclosures would work fine in the new model, but the need for steering and pedal drive would mean the unibody design would have to go, and the front end get a redesign.

See details of the front axle (70K JPEG) and the front fender (80K JPEG) of the smaller pull-along Jeep.

Cutting the grille slots in the plywood was obviously labor-intensive, but having the real slots is probably an important feature in making Barry's project a convincing CJ-3B (90K JPEG). He also referred to the Willys CJ-3B prototype drawings to help estimate correct proportions. 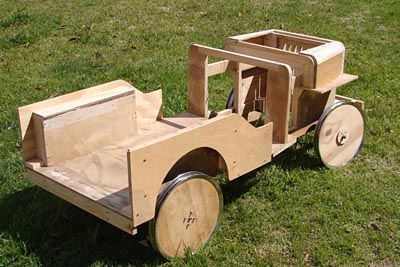 Barry says the finished weight is around 25 kg (55 pounds) and comments, "3/4-inch plywood is not light! I think that I made it a bit too heavy but it is strong, it can take my weight and I can pedal it, so it should last the boy a few years. I used bearings on all the wheels so it is easy to move on smooth surfaces, not so easy on grass. My son is 4 and is not quite strong enough to pedal it yet, so I still have to push it." 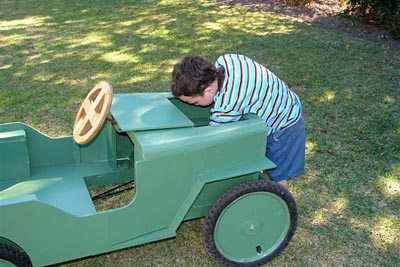 "The bonnet just had to be there! It adds a touch of realism and gives access to the steering mechanism. I had to find a reason to put something to open the bonnet with, as it is stiff to open. Thankfully I found a picture of the strips on which are the windscreen is supposed to rest when in the horizontal position. I don't think that I will add a windscreen as it will only flap about." 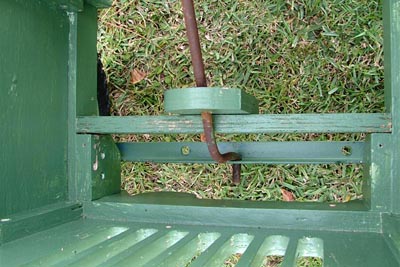 Here's the view looking down through the open hood. Barry assembled simple but effective steering and drive mechanisms. The steering linkage includes a rod with two bends, and a piece of angle iron attached to the hinged wheels. 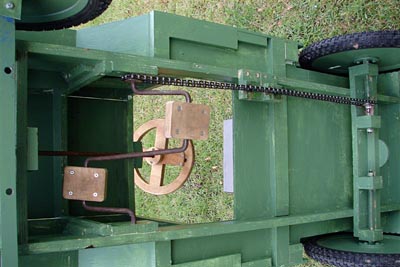 Barry describes the drivetrain: "I had to bend my own crankshaft and make a hub onto which a 13 tooth bicycle sprocket was welded. I had to put spacer blocks made from plastic to take some of the slack off the chain; an adjustable chain tensioner would be the answer. The back axle is a 10mm threaded bar and may prove to be a weak point.

"It has a 1:1 gear ratio so the only braking effect is to resist the pedal crank; not the best solution I know, but the gravel roads are quite flat around here. I would recomend a braking system if it is to be used in steeper areas." 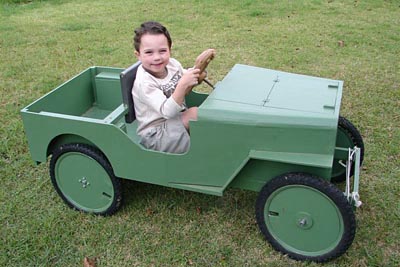 "I fitted a seat back so the boy can put a bit more oomph into the pedaling action and I can push a little less too!

"I would have loved to use a spray gun for the paint job but I don't have a compressor. I hate a paint brush! It can clearly be seen in the paint work -- nice from far but far from nice!"

Thanks to Barry for the design and the great photos. If anybody follows his lead, I hope you'll send us some pictures of your version too. -- Derek Redmond

Elsewhere on the web, see the complete instructions for "A Jeep for Junior" in Merl's Garage.

See some 1945 Pedal Jeep Plans from Popular Science magazine, and 1948 plans for the battery-powered La Jeepette.

Last updated 2 May 2009 by Derek Redmond redmond@cj3b.info
https://cj3b.info/Toys/RidingToy3B.html
All content not credited and previously copyright, is copyright Derek Redmond