1948 Plans for an Electric Toy 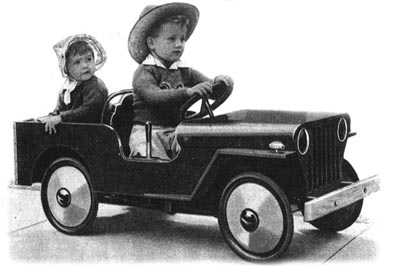 Here's another set of vintage plans for a Jeep riding toy, from the January 1948 of Popular Mechanics and the April 1948 issue of the French magazine Mecanique Populaire. The cover of the French version (below) indicates a continuing interest in military hardware, three years after the end of World War II. Some of the parts used in this project are clearly expected to be available as war surplus, in particular the hydraulic transmission. 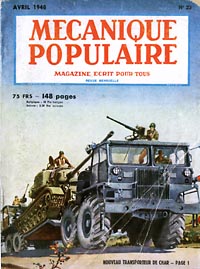 This is a fairly ambitious project mechanically, but the introduction says: "Powered by an auto-starting motor, it's just the right size for sidewalk use. Without motor, it's an ideal coaster or pusher."

Download the two-page spreads below, in English (300K JPEGs):

Or click each of the two-page spreads below to download a large copy of the French version (460K JPEGs):

Thanks to J-L Martin for scanning the article in French, and Laird Kelly for finding the English version. -- Derek Redmond

Jean-Yves Morin was inspired by this article to build his "DZEEP", seen in Battery-Powered Jeep Riding Toys.