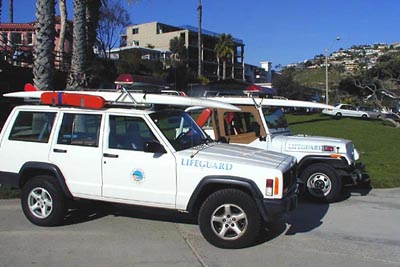 During a visit to California in the late 90's, Mike Albright took these photos of the three mobile units of the Marine Safety Department of Laguna Beach, California. I was interested by their use of both the Cherokee and the Wrangler. The XJ is widely used by police, fire and EMS agencies around the world, but the slightly smaller YJ is a bit more unusual as a public safety vehicle. And seeing the two Jeeps side-by-side got me thinking about not only a modelling project for myself, but also one that might be marketable by Majorette or Matchbox as a set of their 1/60 scale toys. 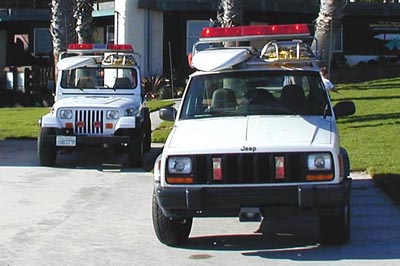 I thought a little background information would make the project more interesting, and a visit to the web site of the City of Laguna Beach revealed the following:

The Marine Safety Department is responsible for 4.7 miles of city coastline, providing ocean rescue and emergency medical treatment 24 hours a day, 365 days a year. The Department also provides scuba search and recovery, cliff rescue, flood "swift water" response and backcountry extrication, as well as prevention, enforcement and public assistance. In an average year, Marine Safety personnel rescue 1,500 beach-goers and give medical attention to another 2,500 people, from their 27 lifeguard towers and three mobile units. Their services are also contracted out for commercial film shoots along the coastline.

My modelling project was more a matter of detailing than of actual modelling, and this is what I thought might make it attractive to one of the diecast toy manufacturers. The most obvious candidate was the Majorette Cherokee, which is already available in a white-painted "Sheriff" version with light bar, and in green or black versions with surfboards mounted on the roof. 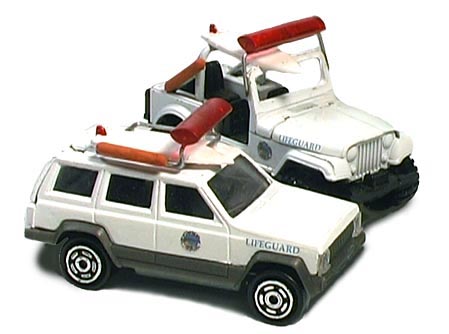 I combined elements of both Cherokees, and added a bent-wire roof rack and plastic rescue float. After some initial attempts at bending fine wire, I abandoned the time-consuming job of fabricating evacuation litters to mount beside the surfboards on the roof racks. I figured a commercial version would probably include only the surfboards anyway, or possibly a new plastic molding of both surfboards and light bar. 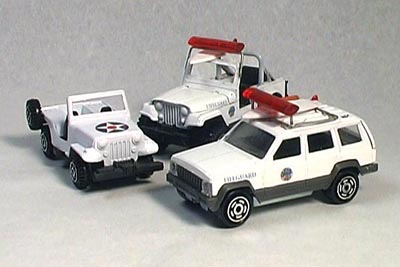 Matchbox's two-door Fire Chief XJ (25K JPEG) would also be a candidate for the makeover. Both companies also make Universal-type Jeeps which could be used to represent the other prototype, although neither makes a YJ Wrangler. I chose a 1980's "Made in China" CJ-7, since it was also already white and didn't require major painting. After removing the existing graphics from both toys with acetone, I touched up the white paint and added new graphics printed out from the photos taken by Mike.

This photo shows my two Lifeguard models with a white CJ-3B produced in a limited edition by Jarek Skonieczny for the old "jeeptoys" e-mail listserv. 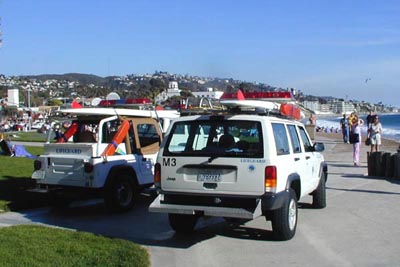 Thanks to Laguna Beach for the inspiration, and to Mike for the prototype photos. (In this rear view, note the rear steps added to both vehicles.)

OK, Majorette, what do you say? -- Derek Redmond