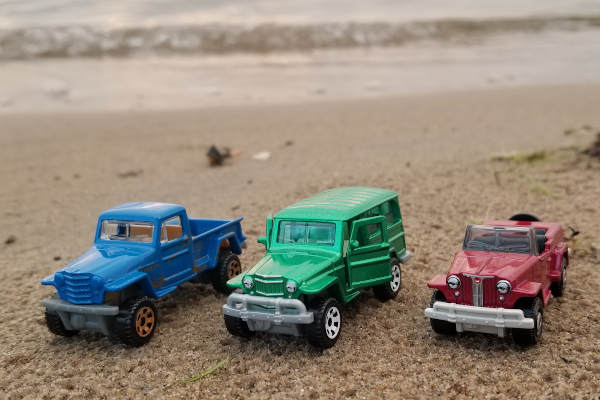 As of 2019, the Fabulous Fifties are back! The Willy-Overland Jeepster and Jeep Station Wagon join the Jeep truck for a drive on the beach.

Both the Jeepster and the Wagon have nice detail on the body, and painted grille details. The amount of realistic body detail on 1:64 castings (from Matchbox and other brands as well) now rivals what was previously only available on 1:43 scale models.

The two brand new Matchbox castings now complete a lineup of offerings from an era when W-O branched out from Jeep's military roots, created new civilian vehicle designs, and with the 4x4 Station Wagon, started the automotive world down the path to the sport utility vehicle. 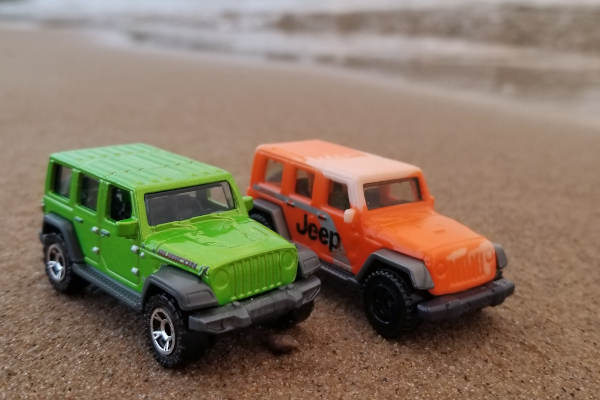 But wait, there was more from Matchbox in 2019: a pair of 4-door Wranglers.

A new JL Unlimited hardtop was one of six Jeeps (680K JPEG) in the mainline series. Similar to the casting style of the Matchbox Cherokee XJ, the fenders are part of the plastic base of the model, which actually adds to the realism of this Wrangler. Other realistic details include door hinges, OEM bumpers, and power bulge hood. 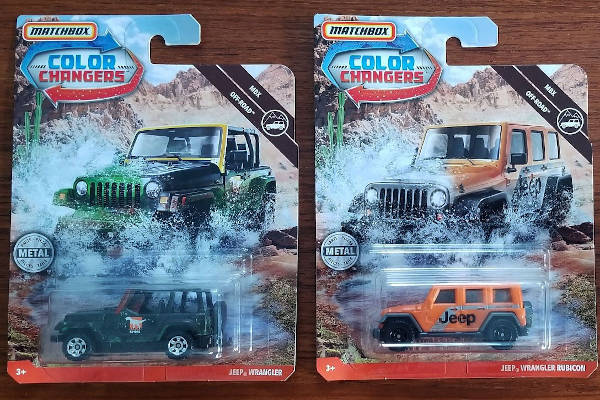 The mainline Wrangler was joined on the beach by a new, noticeably narrower "Color Changers" series Wrangler in 2019. The series also brought back the color changing TJ from last year, now with a dinosaur theme. Both of these Jeeps have a plastic body that reacts to hot and cold temperature by changing color. A cast base keeps the plastic bodied Jeeps from feeling like they lost weight. 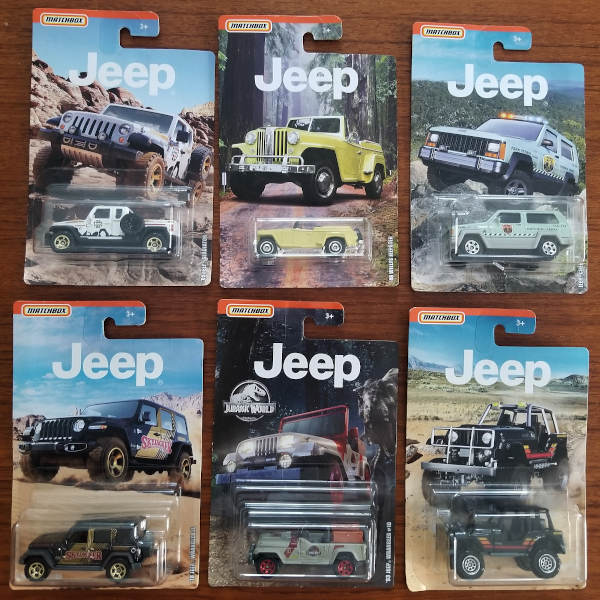 The Matchbox mainline may now have "only" 100 cars (compared to Hot Wheels' 250) but Matchbox makes up for it through numerous special series.

For 2019, Mattel brought back a 6-car Jeep-specific series reminiscent of the 2015 12-car series. This series featured two debuts: introduction of the Jeepster casting, and an open-top Jurassic Park #10 model. This YJ was the action star in the infamous "objects in mirror are closer than they appear" dinosaur chase scene in the original movie.

Also in 2019, the continuation of the "Jurassic World" series (640K JPEG) brought a "battle damage" variation to the Jeep YJs introduced in 2018. 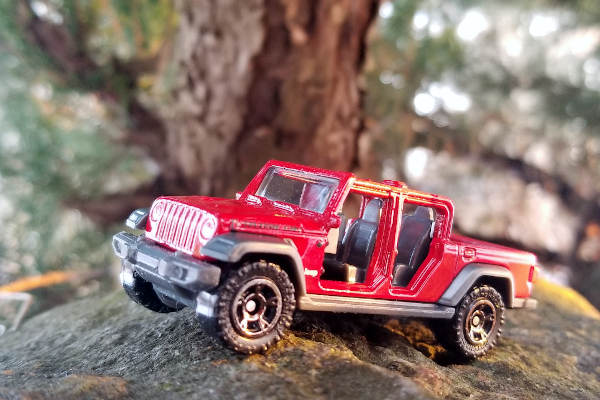 Matchbox had two brand new castings among the six Jeeps (640K JPEG) in the 2020 mainline: a Gladiator pickup, and the Renegade SUV.

The Gladiator looks very Jeep-like with no doors and no top, and shares its grille, bumper, and plastic fender design with the latest Wrangler casting. Attention to detail is evident in the hood vents, OEM bumpers, roll bar, gas cap, and Rubicon/Jeep logos on the body. 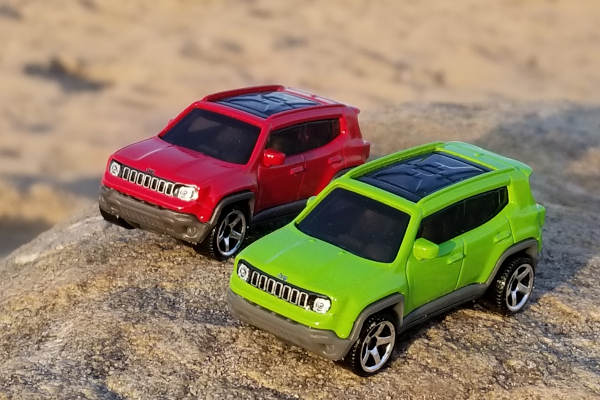 Not to be left out of the open air Jeep fun, the European designed Renegade features a "MySKY" dual panel sun roof, and includes many painted details such as grille, Jeep logos and licence plate, plus headlights and taillights. 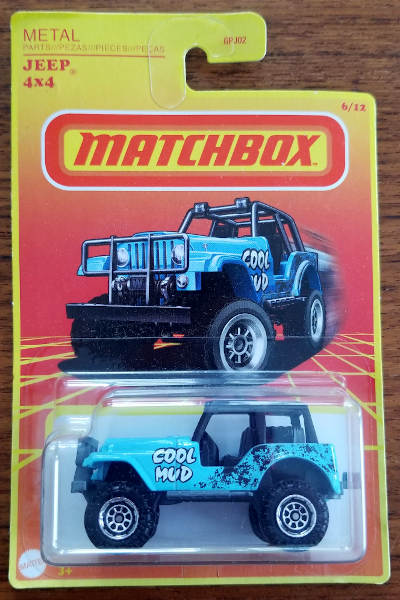 In 2020 Matchbox also released a new "Retro" series, exclusive to Target stores, which included a blue "Cool Mud" Jeep 4x4. The retro CJ-5 is a throwback to the mid-90s version of the Jeep with similar graphics.

Matchbox could have used the very early black or white paint schemes (with tri-color stripes) on this old casting, which dates back to its mid-80s purchase from Kenner (see The Matchbox Story.) But the fact that this retro casting which had disappeared from 2000-2018 is now holding a prominent spot in the Matchbox lineup is sufficient cause for celebration. 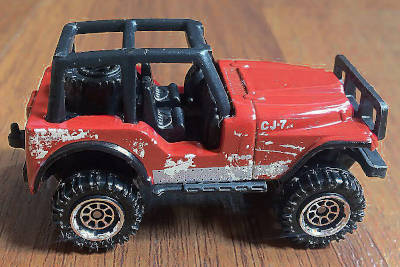 The sequel to the 1986 Top Gun movie, named Maverick after the main character, was initially scheduled for 2019 theatre release. But due to Covid restrictions, it was postponed to 2020, then 2021, and again to 2022. While the movie still has not been released at the time of this writing, Matchbox did issue a Top Gun Maverick 5-pack (140K JPEG) in 2020. It includes a red CJ-5 4x4 (incorrectly labelled as a CJ-7) in addition to a Mini, 2019 Mustang, '72 Bronco and a Swing Wing jet. While no Jeep appears in the movie trailer, one can only hope that Maverick drives a Jeep on his way to the "danger zone." 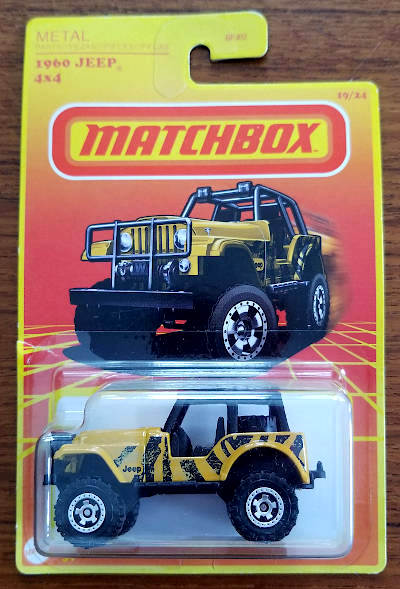 After a spectacular run of ten new castings over four years, Matchbox took a break in 2021 and offered only simple color variations on the Jeeps in the mainline series: Willys MB, Jeepster, Renegade and Gladiator.

One of the most useful additions to the 2021 mainline has been the "Jeep" logo on the top left of the card, which makes looking through the blister packs on the pegs for Jeeps so much easier! Thank you, Mattel -- sometimes it's the little things that help the most.

The Target exclusive "Retro" series added a blue Wagoneer SJ (200K JPEG), a recent Cherokee XJ, and this tiger-striped CJ-5 (based on a 2009 "Desert Adventure" 5-pack edition.) None of these are significantly retro as far as Matchbox Jeeps go, but the SJ casting in wood grain is a great throwback to AMC's 1984 Grand Wagoneer. 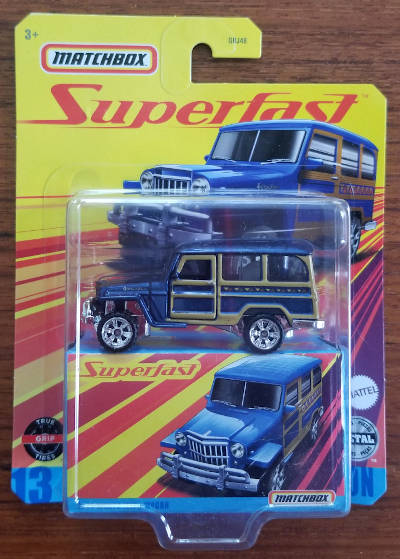 The Willys Wagon returned in 2021 as part of the Moving Parts series on a uniquely shaped card (150K JPEG), and also was included in the Superfast series.

The "Superfast" name dates back to 1969 and celebrates the introduction of "fast rolling" wheels to Matchbox cars as an attempt to fend off the Hot Wheels invasion (see Whizzwheels Hotter Than Hot Wheels?)

This series has been a mainstay for Matchbox and typically includes a box for the cars. The "match box" is a nostalgic nod to the origins of the Matchbox name, which has been around since 1953. The first little Jeep did not appear until a decade later; see the red 1964 Gladiator (featuring moving parts) with its box in The Matchbox Jeep Story on CJ3B.info.


Thanks to Jarek for keeping track of the Jeep offerings from Matchbox for us. -- Derek Redmond