by Jarek Skonieczny
To celebrate the 65th anniversary of Matchbox, Mattel rolled out two new Jeep castings (Wagoneer and YJ) and a number of special editions, for a total of 12 unique Jeep toy offerings throughout the year.

There were five different "World Segments" in the 1-125 Series for 2018: MBX Service, MBX Construction, MBX Rescue, MBX Off-Road and MBX Road Trip. Jeeps were included in three of these segments. 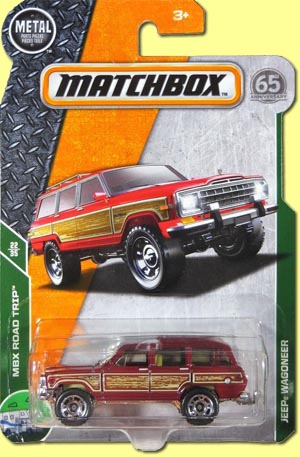 "Road Trip" was the largest segment of the 1-125, with 35 vehicles. Number 22 in the group was a Jeep Wagoneer in Breaking Bad colors, an all-new casting for 2018. While not officially licenced by the TV series, the Wagoneer's paint appeared identical to the model driven by Walt's wife Skyler White in the hit TV show.

According to The Cars of Breaking Bad and the Guy Who Found Them, transportation coordinator Dennis Milliken worked to find vehicles that helped establish not only the characters, but the place: "The Wagoneer could have just as easily been a Suburban, an Expedition, a minivan even. The Wagoneer stood out as unique and much more of a New Mexico SUV."

There has been some arguing about the model year of the Jeep seen in the series, but according to the firm that auctioned the vehicle following its retirement from the production, it's a '91 Grand. See front and rear views in frames from the TV series (300K JPEG), courtesy of IMCDb.org. 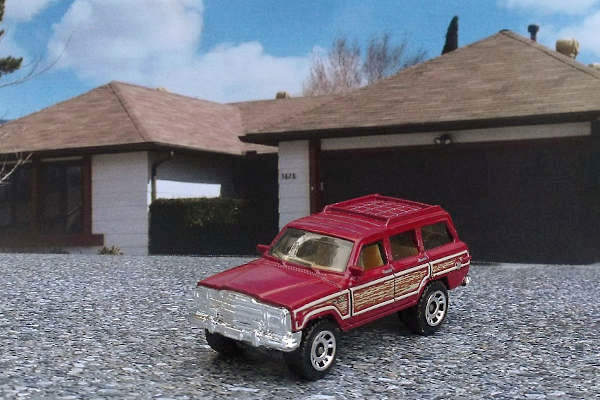 This photo by Jarek puts the new model in the Whites' famous driveway in Albuquerque.

Note that the Wagoneer is not the only Jeep in the series. Walt's brother-in-law Hank Schrader drives a Jeep Commander; see Why Breaking Bad Has The Best Cars On Television from Jalopnik. 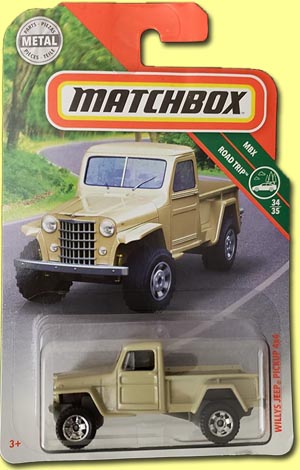 Also in the MBX Road Trip group were some new color variations: the 1953 Willys pickup truck, originally introduced in 2015 in Hermosa Red, got a new paint job that is a very passable imitation of Coronado Sand, another original Willys 1953 color. (Note that their 2016 turquoise version was also very close to Willys' original Willow Green, but the bright yellow one was unlike any color Willys used until 1956.)

And the Gladiator pickup concept from 2017 showed up this year in Firecracker Red (below) which no doubt made Jeep Corp. happy. 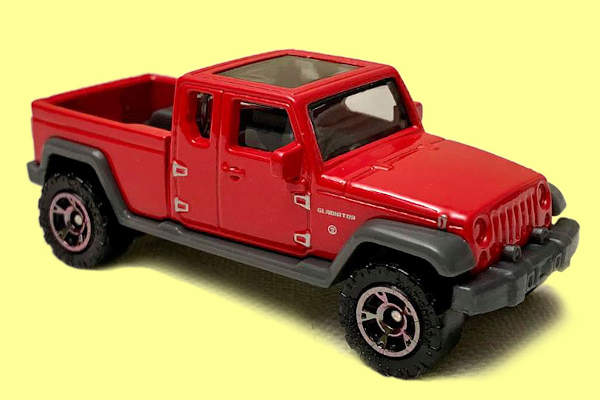 In late 2018 the production version of the 1:1 Gladiator was introduced by Fiat Chrysler at the L.A. Auto Show as a 2020 model. It was Jeep's first pickup truck since the Comanche was discontinued in 1992. But unlike the earlier concept version on which the MBX model was based, the 2020 Gladiator (90K JPEG) was available only with a full 4-door crew cab. 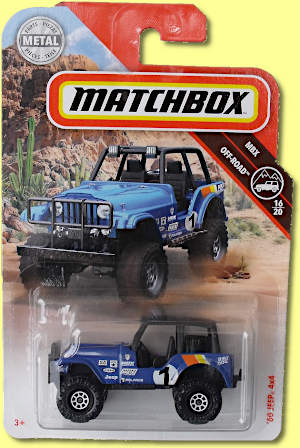 Not brand new, but something we hadn't seen for a few years: the Off-Road segment of the 1-125 Series included a return of the 1980s-era CJ-5 casting, now with a slightly modified plastic base and without the rear whip antenna (70K JPEG). The "Dirt Dog" was convincingly decorated as an off-road racing Jeep.

Less inspired, graphics-wise, was yet another OD version of the '43 Willys MB (170K JPEG) in the MBX Rescue group. 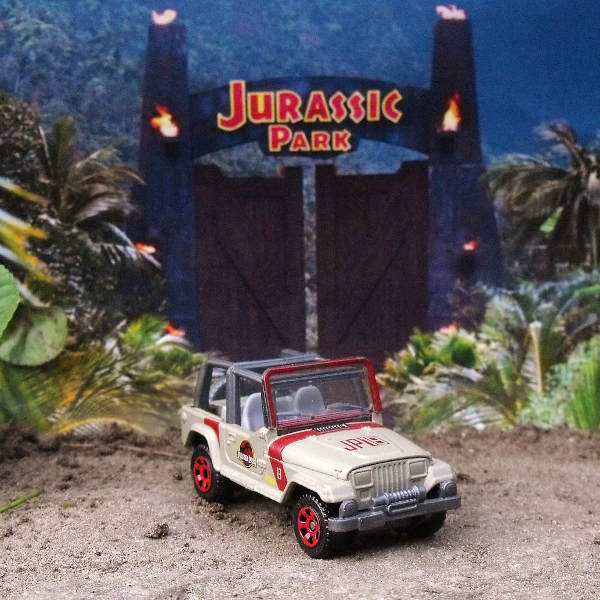 The other all-new model for 2018 was a YJ Wrangler, officially licensed by the Jurassic Park movie series.

In the movie series, 2015's Jurassic World was an attempt to re-create a dinosaur park for people to visit, with (spoiler alert!) shockingly similar outcome to the original Jurassic Park. The characters in the 2015 movie find some abandoned Jurassic Park YJs and use them to make a getaway. 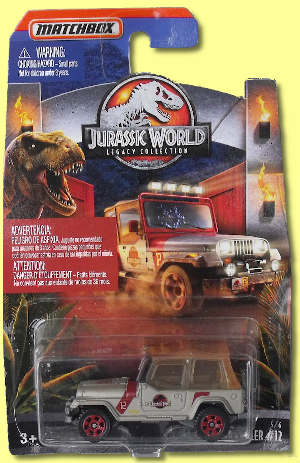 Mattel won the key toy license for the Jurassic World property in 2016, taking over a business that had previously been owned by rival Hasbro. In preparation for the 2018 movie Jurassic World: Fallen Kingdom, Matchbox created a line of 1:64 Jurassic World cars. Unlike previous attempts at re-branding existing cars, the 2018 release was actually a decent re-creation of the cars, trucks, motorcycles, and gyro-spheres from the 2015 movie.

The most prominent vehicles in the film were probably the G-wagen and others from Mercedes-Benz, but the Jeeps played a key role, and as part of their series Matchbox created a new 1:64 Jeep YJ casting in both a softtop and an open-top rollbar version. 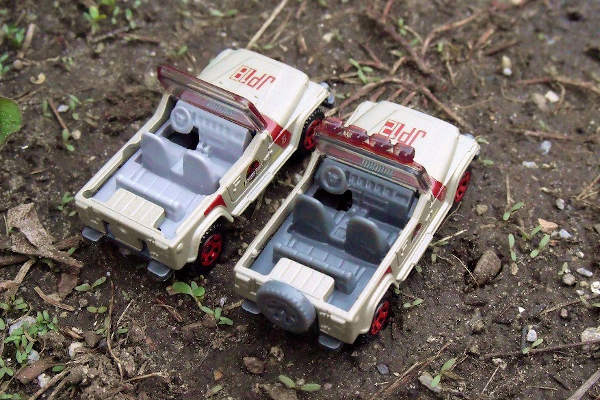 The two models were almost identical but with minor changes to the rear body.

The softtop YJ came in more than one paint scheme (190K JPEG) and the open-top Jeep was also released in a "battle damage" version (190K JPEG). 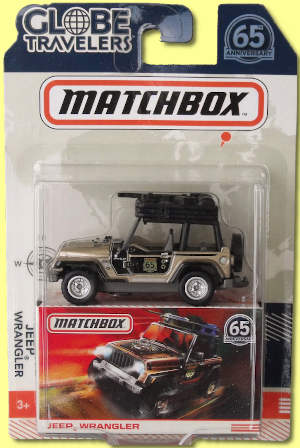 Despite all the excitement about the YJs, Mattel didn't forget about the 1998 TJ Wrangler. To mark the Matchbox 65th anniversary, they released the "Globe Travellers" series, six cars with rubber tires and packaged with a matchbox-style box. The series packaging shows a map with a vague attempt to connect the cars with destinations around the world: the Jeep encourages a visit to the Rocky Mountains. The cars are marked with the 65th logo and will likely have the same collector value as previous Anniversary Issues or Premiere Collection series. The TJ was finished in khaki with black half doors. 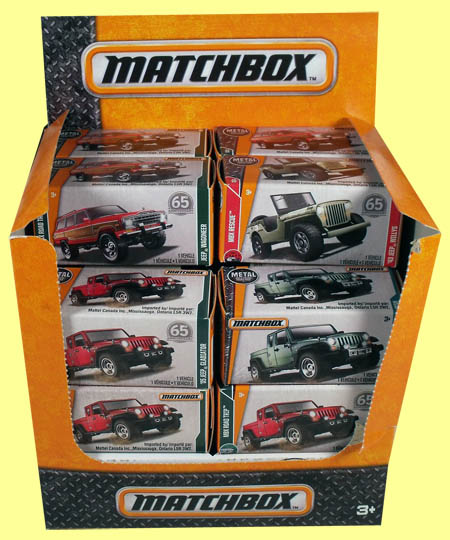 Starting in 2016, Mattel had begun offering an alternate package to the blister pack hanging on a pegboard: a little cardboard box with a car in it. What a concept!

Called "Power Grabs," this separate line of cars is mostly a pared down list of mainline cars with some occasional unique colours. The 2018 list of Jeeps in this series is the MB, Wagoneer, and Gladiator, all identical to the 1-125 Series models. 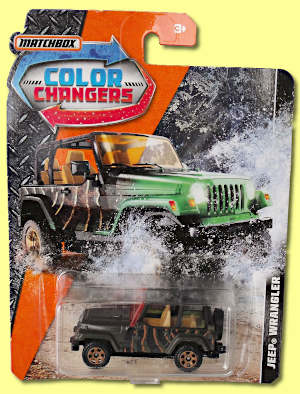 This Jeep TJ looks almost identical to the diecast metal TJ above, but is actually a plastic body with a diecast base. The bright green body is coated in a clear color changing film, which turns dark green when cold. I am guessing that the plastic body helps the reaction time of the color change and allows for distinct lines of color, which actually works really well compared to the color changing paint on the metal-bodied Hot Wheels CJ-7 in the 1980s. 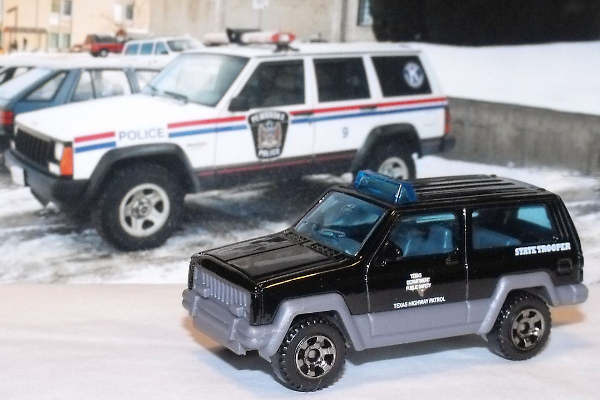 The Jeep XJ Cherokee made a return in Texas Highway Patrol State Trooper livery in 2018. It's seen here parked next to a 90s-vintage Pembroke, Ontario unit from Police Service Cherokees on CJ3B.info.


Thanks to Jarek for continuing to track Jeep offerings from Matchbox for us. -- Derek Redmond