After a spectacular run of special edition Jeeps in 2015 and 2016, Matchbox scaled back the offerings in 2017. Just a handful of Jeeps including one new casting: the "Jeep Gladiator" (#92 of 125). This is not the venerable Jeep pickup produced by Kaiser from 1963-70 -- it's the Gladiator which hit the car shows in 2005 (280K JPEG) with one of those old names which Jeep Corp. has been recycling for its concept vehicles.

Of course the Gladiator name is also significant in Matchbox history; the very first Jeep in Lesney's Matchbox series in 1964 was a red Gladiator (170K JPEG) which appeared just a year after the debut of Kaiser's full-size pickup truck. (See details in The Matchbox Jeep Story.)

The 2017 Gladiator concept brings the all-time Matchbox Jeep casting count up to 19. 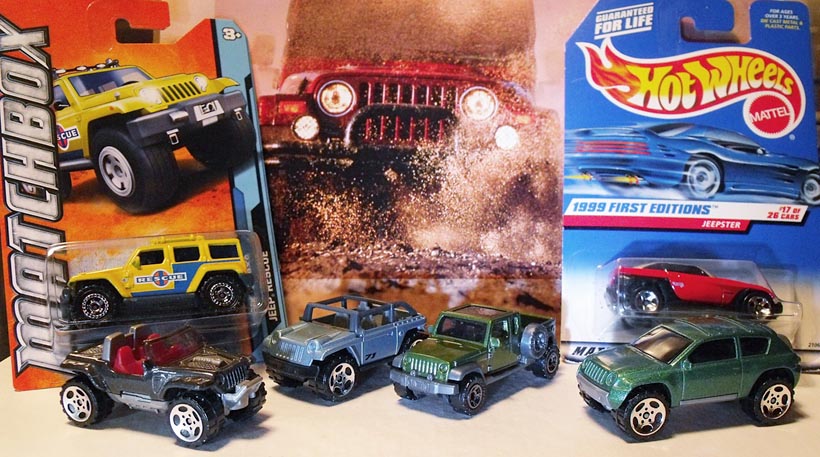 The scale of the Gladiator is not marked on its base, but measuring its wheelbase indicates it is about 1:70, the same as the Rescue truck. The smaller scale allows the longer vehicles to fit in the same size packaging as the stubby Hurricane and Willys, which are marked 1:59 on the base. The Compass (which moved from being a concept to a DaimlerChrysler production car in 2006) is also marked 1:59, but appears larger in the photo above, and in fact measuring its wheelbase suggests it is closer to 1:55. 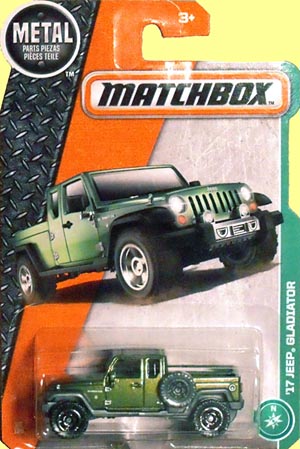 Although the #92 Gladiator is the sole Jeep included in the regular 125 series, it's a good one -- a brand new casting that stays very close to the original full size vehicle.

The Jeep Gladiator concept was introduced in 2005, just as the 4-door Jeep Wrangler JK was being rumored, which created lots of suspicions that Jeep was planning a pickup. A dozen years later the possibility of a Jeep Wrangler based pickup is again being hyped, but on the JL chassis. 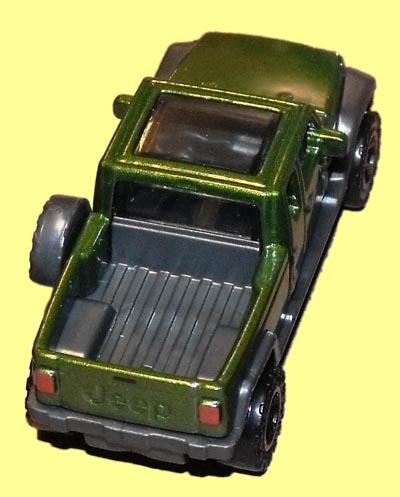 Here's a tailgate view of the new casting which features a clear sunroof and driver-side mounted spare.

Not sure why it's labelled on the packaging as a '17 Jeep Gladiator as opposed to 2005. Maybe as a result of Jeep "confirming" in 2017 that a Wrangler pickup will be built... in the future? 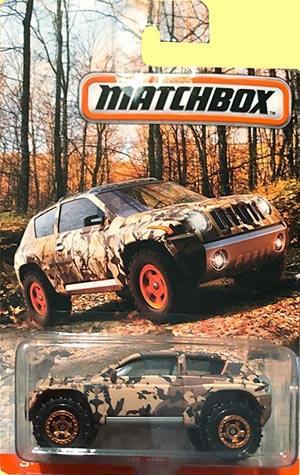 The second Matchbox Jeep for 2017 was a Compass in the "Camouflage" series of six models. Five of the cars have shown up in a 5-pack (130K JPEG) which is missing only the Yamaha Rhino ATV. (Classic Jeep fans may also have an interest in the vintage Toyota Land Cruiser in this set.)

This series is likely based on the popularity of Real Tree camouflage hunting equipment, clothing, decals, and even truck wrap. Trademarking their camouflage pattern was a smart idea, as the popular trend is now paying dividends for the company through licensed material. Mattel seems to have avoided the trademark costs and legal battle by using a generic Desert Storm camo on the toy Jeep. 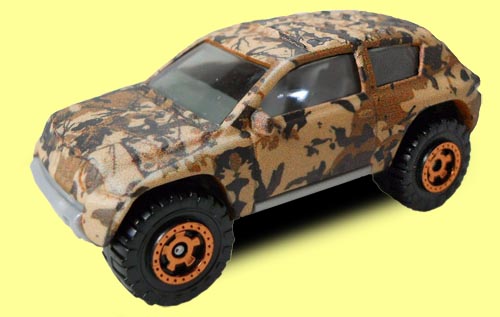 Probably the Compass was a good candidate for the camo series because, of all the Jeep castings, it has the largest areas of metal available for camouflage.

Thanks to Jarek for continuing to track Jeep offerings from Matchbox for us. -- Derek Redmond