Classic Hot Wheels Jeeps on CJ3B.info describes the small diecast models released in the Hot Wheels series of the 1970's and 80's. The 1990's brought only a few new items, described below, and in the early 2000's Mattel apparently had temporary problems with their licensing agreement for use of the Jeep name. But around 2009 that relationship was rekindled. 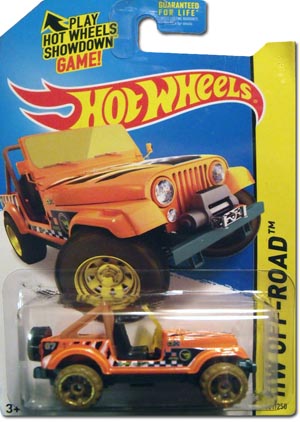 In 2015, the new 2013 version of the Hot Wheels CJ-7 was released into the regular series with an orange paint job, as a "Treasure Hunt" model. Since 1995, Hot Wheels have been identifying 12 different cars a year with an inconspicuous logo to give collectors something unique to seek within the annual release of 250 cars.

Text on the back of the card explains the Treasure Hunt flame logo (170K JPEG) on the side of the Jeep. 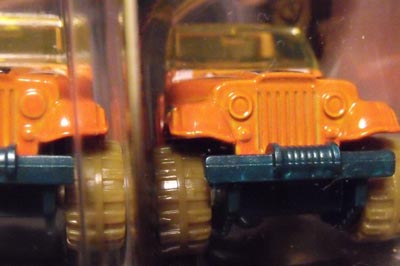 During production, a change was made in the casting of the headlights, creating a variation within the Treasure Hunt series. The earlier "solid" headlights (left) are similar to the 2013 Golden Eagle, and the new "trimmed" lights are on the right. 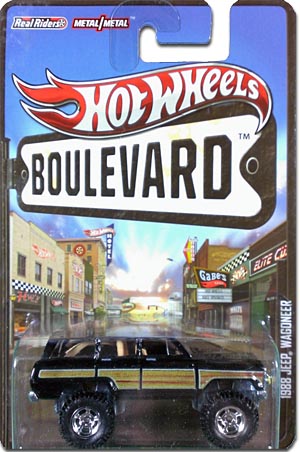 As one of the last vehicles in the 2013 "Boulevard" series, Hot Wheels introduced a brand new casting: the 1988 Jeep Wagoneer. The extreme lift and the roll cage are inappropriate for the elegant Wagoneer, but the Classic Black paint, with woodgrain panelling and yellow fog lights, is perfect.

In 2014 the Wagoneer casting was widely available in the Pop Culture: Star Trek series (120K JPEG), and also as a limited issue Toys R Us mail-in offer (90K JPEG). 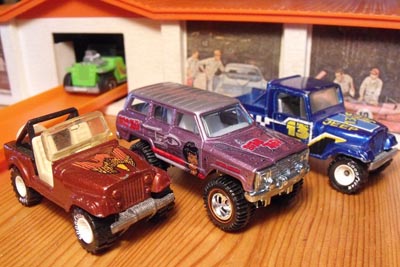 The large soft tires are a reminder of the "Real Riders" wheels released in 1983 on the Scrambler and CJ-7 castings. In this photo (left) the Real Riders Jeeps are parked with the Star Trek Wagoneer in front of a '69-vintage Hot Wheels carwash building.

Joining the Scrambler and Grasshopper castings recently brought back from the dead by Mattel in 2009-10 (see below), is the 2013 Hot Wheels CJ-7 in a very realistic "Golden Eagle" trim, pictured here on a 1979 AMC CJ-5 sales brochure.

line which did not sell very well and was cut short after only 28 of the planned 40 models were released. The CJ-7 was in a truncated final shipment which left collectors scrambling to locate the cars, as fewer than normal stores received this shipment. For the 2013 re-issue, Mattel revised the base of the Golden Eagle CJ-7 to make it a "wide track" (200K JPEG) in an effort to prevent 60 Minutes from releasing another rollover video that could lead to fresh lawsuits...

Two other small changes in the Flying Customs CJ-7 (left) compared to the 1982 original issue (right) are the removal of the fishing rod from the back and molding the steering wheel into the dash (see the large copy of the photo, 170K JPEG).

Even though re-releases are generally frowned upon by diecast collectors (since they decrease the value of older cars by increasing availability of new mint versions), it would be great to see this CJ-7 casting join the Scrambler in the regular Hot Wheels line-up where it could be sold in other 80's trim like Levi, Renegade, Laredo, and Limited. 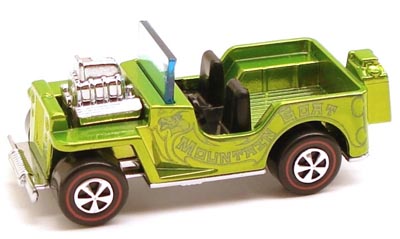 For 2010 the toy company re-released what CJ3B.info has long called "the perfect Hot Wheels Jeep" -- the Grass Hopper. Now known as the "Mountain Goat" in the Neo-Classics series, it has the exposed V8 engine of the 1974 version of the Grass Hopper.

But it's hard to find in stores, and seems to be selling for $15 or more online. Too expensive! 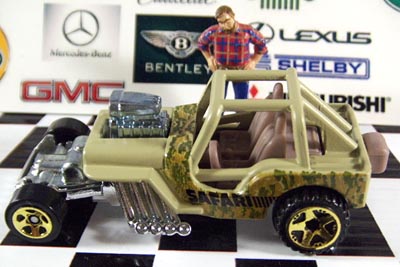 In between re-releasing classic Jeep models, Hot Wheels came up with something new, which they bizarrely referred to as a Custom '42 Jeep CJ-2A (50K JPEG). Although squarely in the Hot Wheels tradition, some diehard Jeep fans found this 2009 dragster a little too off-the-wall. CJ3B.info has tried to put this model into context with a history of The Jeep "Funny Cars".

Thanks to eBay seller cu$tom!z!ng4u for this nice car show photo of the Safari version with gold rims. 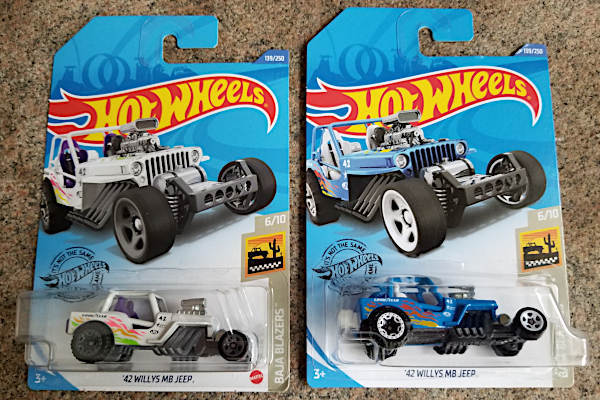 For 2020 Hotwheels finally fixed the model name to '42 Willys MB and released blue and white versions. Unfortunately the update also came with a switch from a metal base to a plastic one, which meant that the V8 engine exhaust pipes went from chrome to matte black. 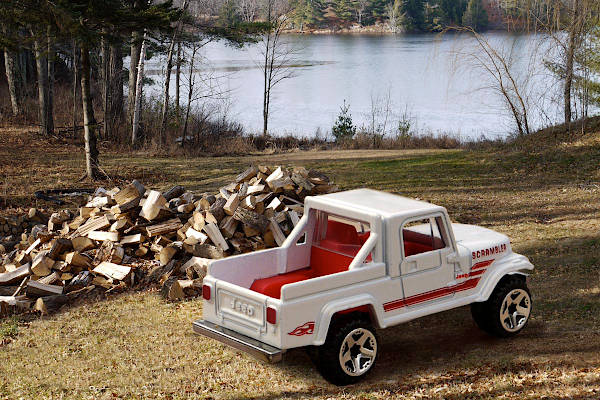 For years we were asking Matchbox to make more use of their Jeep castings. But instead of that, Matchbox's corporate (Mattel) cousin Hot Wheels apparently started speaking to Chrysler again in 2009, and revived a diecast toy that can be considered a classic. The Hot Wheels CJ-8 Scrambler (see Classic Hot Wheels Jeeps on CJ3B.info) was out of production for more than a decade, but suddenly reappeared with the axe and sticks of firewood (50K JPEG) still lying in the bed of the little pickup.

On the plus side: this was the most realistic Hot Wheels Jeep ever, it still stands up pretty well for accuracy, and the packaging (70K JPEG) has illustrations matching the paint color. Plus there aren't many CJ-8 toys around, and it's great to see the prototypical "Scrambler" lettering on the hood. The weakness is one that many current small diecasts suffer from -- cheap wheels. The all-black plastic wheels on the brown version (70K JPEG) were pretty sad, particularly in comparison to the realistic Goodyear rubber (60K JPEG) worn by the "Real Riders" versions of this toy 20 years ago. But it's not so bad when the wheels are chromed, as on the blue version (70K JPEG). A Flag Day edition (70K JPEG) has gold rims. 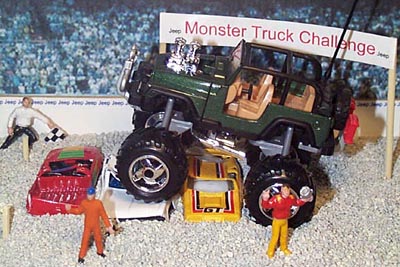 A successful late 1990's addition to the Hot Wheels lineup was the larger 1:43 scale MECHANIX series of customizable models. For 1998 Hot Wheels introduced the Jeep Grand Cherokee ZJ (50K JPEG). The packaging imitates a garage setup and includes all the parts and tools to go from mild to wild. In 1999, a TJ replaced the ZJ in the MECHANIX line. For 2001 a yellow "surfing" version of the TJ was released. These diecast vehicles with plastic parts became an instant hit and have already spawned cheap imitations. Not to be outdone, Hot Wheels has introduced a battery powered "air wrench" which replaced the manual cross wrench in the more expensive line of MECHANIX kits. As of late 2001, the Jeeps are not available with the "air tool". 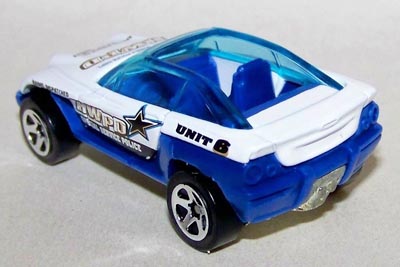 The 1:64 Jeepster prototype was the first of many Jeepster toys which followed the 1998 Detroit Auto Show concept vehicle from Jeep. Among various wacky Hot Wheels versions of the Jeepster there's an "H.W.P.D." police car; see also a right side view (130K JPEG).

Appropriately the Jeepster represented Ohio (70K JPEG) in the "Connect Cars" series where you could collect all 50 states. 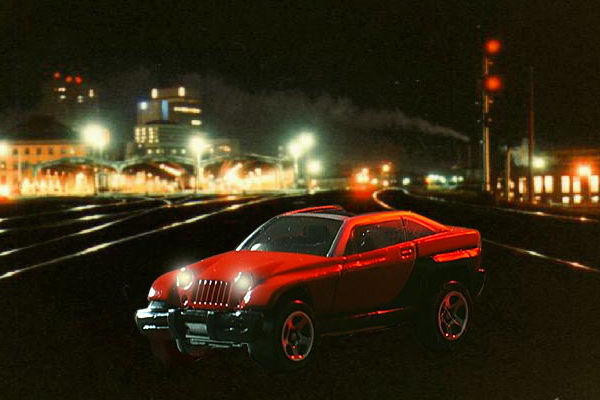 Mattel marketed its new castings as First Editions, and the original red Hot Wheels Jeepster was number 17 of the 26 First Editions for 1999. Thanks to Jolly Goodfellow for the background photo of the rail yards of Winnipeg, Canada.

Even before the 1990's, Hot Wheels marketed some special-series and larger-scale toys. 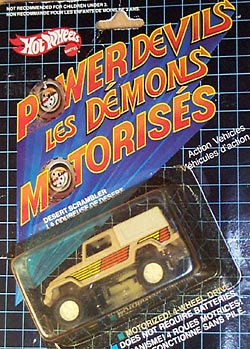 The date on the package of this "Desert Scrambler" is 1982. Part of the Hot Wheels "Power Devils" lineup, the 1:43 scale plastic CJ-8 features a no-batteries-required 4WD (see an underside photo, 30K JPEG). Also listed in the lineup is "Jammin' Jeep". The lack of information on this series of Hot Wheels, which was Mattel's competition for the Stomper 4X4s, suggests that it was not a very popular nor long-lasting series. 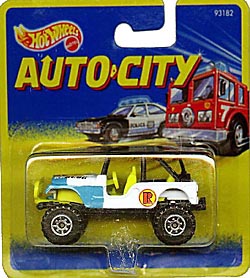 Hot Wheels seemed to have a fondness for long-wheelbase Jeeps. After buying Corgi, they used the Corgi 1:64 CJ-6 casting a few times, including this "Auto City" rescue version. (See also Corgi Toy Jeeps on CJ3B.info.)

With the slotted grille replaced by a checkered one, the CJ-6 was part of the short-lived "Surf Patrol Action Pack" lifeguard set (see Lifeguard Jeep Toys). And strangely enough, although this CJ-6 was only a footnote in the history of Hot Wheels, it was also released (with orange and yellow racing trim) as the Off Road Racer in the "FAO Schwarz History of Hot Wheels 3" multipack. The 8-car set was apparently a limited edition of 8,000 worldwide. 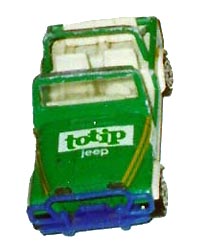 This Italian Hot Wheels 1:32 CJ-7 is apparently found widely in Europe in a number of variations. More info and photos welcome.

Thanks to Jarek and to Mike Albright, Pete Pearson and Bill Kelsey for photos. -- Derek Redmond