We used to do an annual review of MBX Jeeps in the Toy Jeep Pages (see Matchbox Jeeps of the 21st Century,) but after 2005 the offerings seemed reduced to a trickle of new versions of 3 concept vehicles. Then a new Willys MB (2010) and this Wrangler JK (2012) appeared, so there was once again a respectable Matchbox line of 5 Jeeps available. Thanks to Jarek for doing this update on the newest one. -- Derek Redmond

To show off their new products, aftermarket manufacturers build custom show vehicles and take them to SEMA, the annual aftermarket parts show in Las Vegas. One of the countless Jeeps at the 2010 show was a green monster JK build by Superlift Suspensions, and Matchbox. Here's what JP magazine had to say about the full-size custom Jeep: 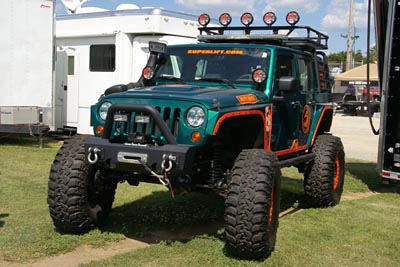 "Life-Size Toy: The Superlift 4xAdventure Jeep caught our eye thanks to the Smittybilt fenders and House of Kolor paint. Well, that, and it looks like a real life Matchbox car. It might look like a Matchbox car because Superlift actually worked with Matchbox on the project to get the right look. A big part of that look is the wheels and tires, so Superlift went with custom Stazworks beadlocks with 42x14.50-17 Super Swamper Iroks. You have to take this Jeep in the fun that it was intended. There were things on the spec sheet that we never expected to see on a Jeep. Tuxedo, grappling hook launcher, scuba equipment, and net launcher were but a few of the standouts."

logo appears on the hood, sides and rear of the full size Jeep which was also spotted at the 2011 York PA Jeep Show (above) by geepstir. 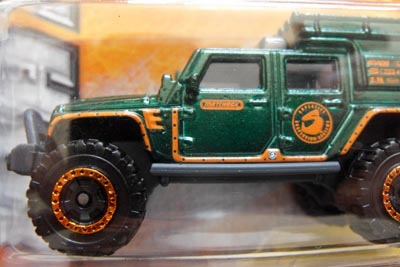 What makes this show vehicle interesting is that Matchbox then created a 1:64 scale version of the Superlift Jeep and included it in the 2012 regular lineup of toys which now included 5 Jeep castings (below): Superlift Show Wrangler, Rescue Concept, Hurricane Concept, Willys Concept, and Willys MB.

(For 2012 Mattel increased the total number of regular cars to 120. The original lineup used to include 75 cars and had been increased to 100 vehicles in 2008.)

And a surprise in 2012 was the Jeep Compass showing up for the first time since 2009, as the "Exclusive Vehicle" in a 9-car Gift Pack (120K JPEG) with yellow paint and a "Jamboree" graphic. 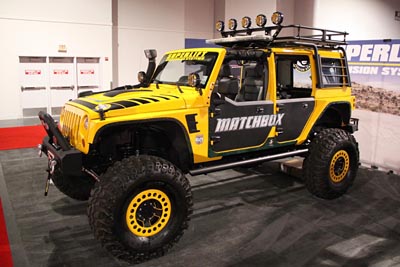 For the 2012 SEMA show, the Matchbox Jeep returned. This time it was in yellow paint with black half doors and a Matchbox 60th Anniversary logo on the body. (Photo courtesy of OPTIMA.) 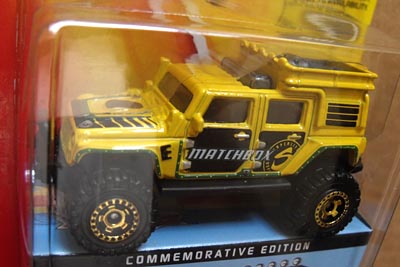 This color scheme has been duplicated by Matchbox and included in a 2013 "60th Anniversary" series of 24 vehicles. As is now customary with Matchbox special edition models, this Jeep comes packaged with a box (200K JPEG).

A new variation of the casting in white paint, in the 2013 lineup of 120 regular cars, makes three versions (150K JPEG) of the Matchbox Superlift Jeep now commercially available. The 2013 version has a large Jeep logo on the sides and a Superlift logo on the two front doors. 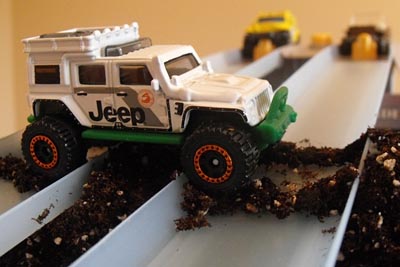 "Some cars not for use with some sets."

The 2013 widetrack Superlift JK makes its way across the playset in front of the 2012 Rescue and MB Jeeps. Of interest is the "power bulge hood" on this casting, which in 2013 became available on the 1:1 Wrangler MOAB edition (non-functional) and the 10th Anniversary Rubicon Wrangler (including functional vents.) 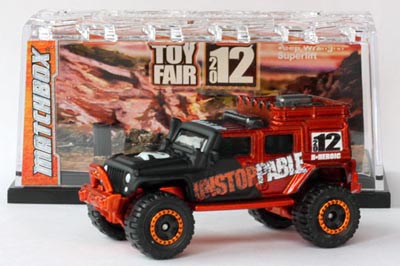 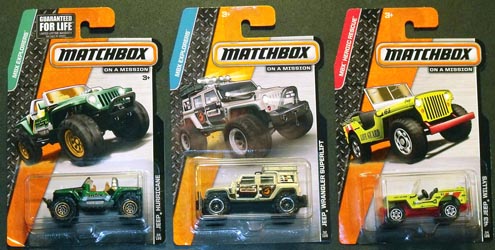 For 2014, there were a few repaints, for a total of only three Jeeps available: green Hurricane and tan Wrangler in the MBX Explorers series, and a yellow "Lifeguard" Willys in the MBX Heroic Rescue series.

Thanks to Jarek for our first Matchbox update in a few years. -- Derek Redmond