The '43 Jeep Willys released by Matchbox in 2010 is a puzzle. Out of left field they come up with what is apparently a completely new casting of a Willys MB? Not as accurate or detailed as the Johnny Lightning MB, but certainly miles ahead of the flatfender Matchbox was flogging for over 30 years (see The Matchbox Story.) Did Chrysler want Matchbox to do a more accurate "antique Jeep" as part of renegotiating their licensing? The backwards name "Jeep Willys" suggests the Corp. had some influence on the name. But why not "Jeep Willys MB" at least? 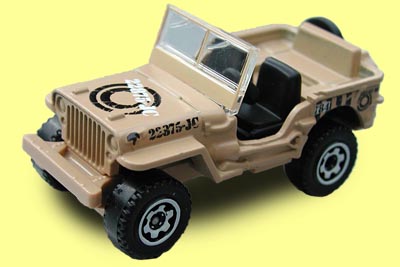 And then there's the two paint schemes that limped onto store shelves in the "Jungle Explorers" series in 2010 (see the cards, 140 K JPEG.) Either olive drab or sand, each with some quasi-military graphics that make them look like they belong to some obscure rebel group somewhere. Wouldn't starting with a basic WWII jeep make more sense than these generic versions?

Maybe Matchbox is just testing the waters, and will soon make some good use of this casting. A decade or two ago I would have been pleased to see this toy appear for about $1 in stores, and maybe there will be some surprises yet.

By the way, this casting is labelled on the plastic base as 1:52 scale, although quick measurements suggest it is closer to Matchbox's usual 1:56. It uses the solid transparent plastic windshield with painted-on frame, a solution which has looked OK and been fairly rugged on the Matchbox Wrangler. 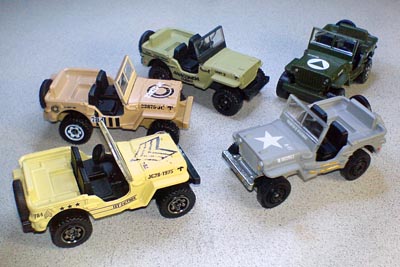 Update: 2011 and 2012 brought a few more vaguely military versions in shades of green, brown and black. The only one that almost had some serious appeal was in the "Lesney Edition" series, which came with old-style Matchbox cardboard boxes. Painted grey, it seemed to be inspired by U.S. Navy Shore Patrol jeeps, but instead was labelled "Service Patrol." 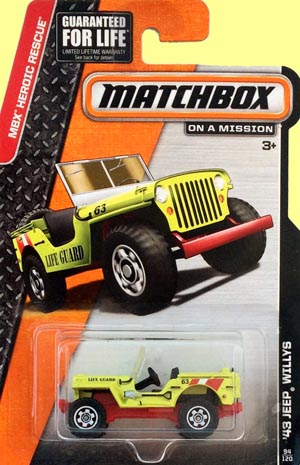 The Lifeguard paint scheme with red accents is eye-catching and realistic, although a prop like a surfboard would make it more convincing. See more on Matchbox lifeguards in Lifeguard Jeep Toys.

The really weak element in these two releases is the lack of paint on the windshield frames -- nothing but clear plastic. 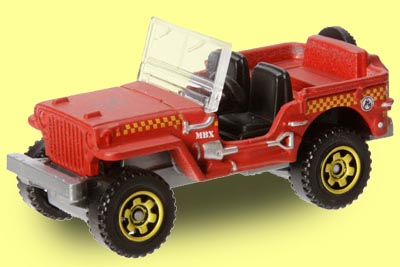 The shovel on the side makes sense on the fire Jeep, and is highlighted with paint, but again some additional detail like a siren or extinguisher would make it more attractive to collectors. And a fire Jeep based on an actual historical prototype would have been more interesting.

Thanks to Romandi for his photo from the Matchbox Cars Wiki. -- Derek Redmond