There are a bunch of small but detailed diecast Willys MB jeeps in the Johnny Lightning military vehicles line. Note: the latest two, part of the Battle of the Bulge series (20K JPEG), are in OD with invasion star (inside a circle); one with canvas tilt and one with machine gun mounted. 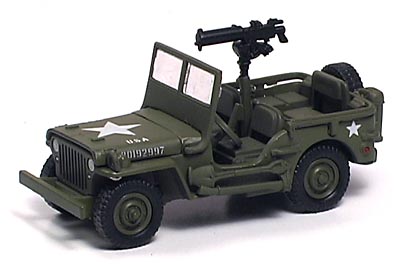 This olive drab version of the MB model, manufactured in China by Playing Mantis in 2000, was the first jeep in the "Lightning Brigade" series. The packaging states that this version is based on a jeep owned by Fred Ropkey Jr. of the Ropkey Armor Museum in Indianapolis, Indiana. The package also indicates that the repro U.S. 20th Airborne patch which comes with the model, is an authentic patch used by the branch that the vehicle was assigned to. See the Lightning Brigade packaging (70K JPEG) including the patch.

A comment about the unusual machine gun on this model, from Jan on the jeeptoys e-mail listserv: "That's an early-type Browning MKI .30 cal. MG (machine gun). Usually found as an infantry support weapon (platoon level). The jeep is usually fitted with the later type Browning MG, the one without the water cooling mantle (the thick part of the barrel)." 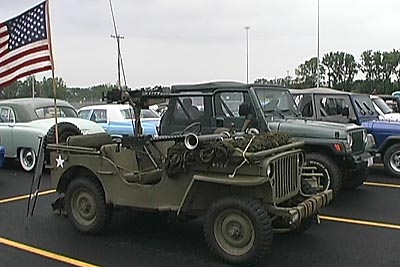 Other comments from the listserv, about machine guns on jeeps: "Machine guns were not issued with jeeps. They belonged to the using unit. There are many photos of WWII jeeps with water-cooled 30's, air-cooled .30's, and .50 cal. both heavy-barreled flexible and aircraft version. As far as the .30 cal., it was probably determined by the unit level. Weapons platoons in companies probably had air-cooled .30's, heavy-weapons companies had .50 and water-cooled .30's."

"There's a picture of a USMC 25th Div. jeep in the book Essential Military Jeep with a water-cooled MG, I presume 30 cal. There was never really any standard issue MG for a jeep, although the M31c and M48 mount was made to take both the Browning 30 and 50 cal. cradle with a vehicular base. If you go through wartime photos, you will find all types of mounts, and most seem to have been made in the field from whatever scrap was available. The M1917 water-cooled 30 cal. was paired with a D7431 cradle which would fit straight onto the M31c mount, but I don't believe that the water-cooled 30 cal. was used much at all by US Forces during WWII."

The photo above shows an MB with light and medium machine guns (not to mention the bazooka), on display at the Jeep employees car show at Toledo in the summer of 2000. See also a closer view of the two machine guns (60K JPEG).

The Johnny Lightning MB has also appeared in an OD version with soft top and invasion star (in a circle) on the hood, and in brown paint (60K JPEG). I'd be interested in knowing the authenticity of this paint job -- the jeep comes with a reproduction of the patch of the North African Theater of Operations Headquarters Staff. See the Lightning Brigade packaging (110K JPEG) including the patch. 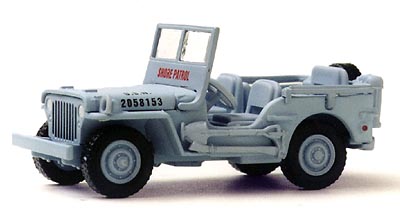 Playing Mantis produced two Navy "Pearl Harbor" versions in early 2001, one of which has "Shore Patrol" (Navy military police) markings. See the other Navy version (120K JPEG) in its Johnny Lightning packaging which says "authentic replicas of Pearl Harbor military vehicles." Although the North American distributor decided to hitch these models to the 7 Dec. 1941 attack on Pearl Harbor (and the 2001 movie of the same name), the real stamped-grille MB was not delivered by Willys until six months after Pearl Harbor, in June 1942. 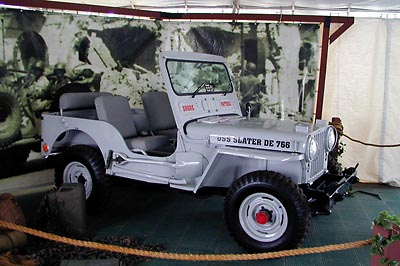 Here's another example of confused Jeep chronology. The backdrop behind this Shore Patrol Jeep at Daimler-Chrysler's Jeep 101 event, is a WWII photo, but the Jeep itself is a Korean War-era M38. The "a Jeep is a Jeep" attitude may be excusable in toys and movies (see the CJ-3B in Patton), but in museum-style displays we generally expect scrupulous accuracy. The newer-style 15" wheels are also incorrect for this M38. Photo by Mike Albright.

Mike Winchester comments on the Shore Patrol livery: "A Jeep could have been used for Shore Patrol duty, and each ship usually had a vehicle assigned to it when in port with its name on it (at least when I was in,) however a destroyer escort (DE) would not have had its vehicle marked as Shore Patrol. If you pulled SP duty you would muster at the base SP building and go from there. The ship and hull number are correct though." 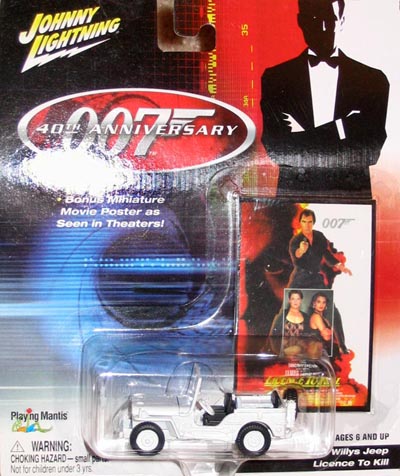 The most inaccurate use of the Johnny Lightning Willys MB was in the 2003 series celebrating the 40th anniversary of the James Bond 007 movie franchise. The all-white version of the MB casting represents villain Franz Sanchez's Jeep in the 1989 film Licence to Kill (40K JPEG) which was actually a 1976 CJ-7, and was crushed by an 18-wheeler in the film.

Thanks to Jarek Skonieczny and Mike Albright for photos. Any further information on the brown North Africa paint scheme is welcome. -- Derek Redmond