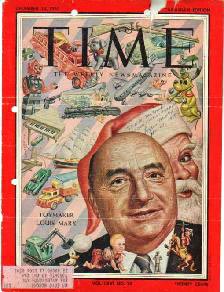 An overview of all the toy Jeeps produced by Louis Marx & Co. from the 1940's to the 1970's, is a major project that has been on the back burner at CJ3B.info for a long time. The Marx stamped-steel Jeep based on the CJ-2A was an influential toy, and the company also made a variety of other metal and plastic Jeeps over the years. But Jeeps in fact represented only a tiny fraction of the output of this huge company, originally founded by Louis Marx in 1918. Marx was reportedly manufacturing some 20% of all the toys sold in North America by December 1955, when Louis Marx and Santa Claus were together on the cover of Time magazine.

Other than Bart McNeil's article on the Early Marx Jeeps, the research for a thorough history of the Marx Jeeps has not been done. However, I have been collecting photos which I thought we should have online for reference. So here's our gallery of Marx Jeeps. -- Derek Redmond

Thanks to Mike Boyink, Sam McKay, Steve Norse, Jeff Williams, Mike WInchester and others I am probably forgetting who sent me photos. Further contributions, as well as corrections or additional information, are welcome. -- Derek Redmond