While the U.S. military was still occupying Japan following World War II, small manufacturers there began producing toys representing the ubiquitous U.S. Army jeep. Tinplate toys including the jeeps began to be exported to North America, even before transistor radios. Early examples such as the 2-3/4" (7 cm) "U.S.A. Jeep" below, may have been made from recycled tin cans. Removing its body reveals the tobacco can label printed on the inside of its chassis. The friction motor powers the rear axle, which has thin rubber tires on the tin wheels. 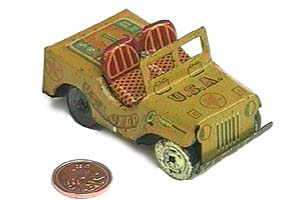 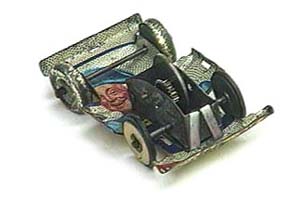 Because the tinplate Jeeps usually have an enclosed area behind the front seat, to provide room for a friction motor inside, details are simply painted on the top of the enclosure. Painted rear seats aren't very interesting, so there are often winches, tools, or radio transmitters lithographed on. See a rear view of three Jeeps (35K JPEG). See also Tinplate Lithography on Toy Jeeps: How It's Done. 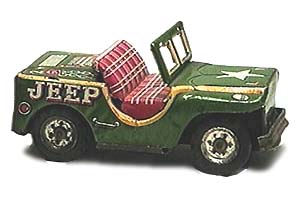 Considering the cleverness of the construction of these low-tech toys, the inaccuracy of their proportions may be a bit surprising. But they were presumably built low and wide in order to use the same chassis and mechanism being used for other toy cars.

This 4-1/2" (12 cm) Jeep built by "SSS" in the 1950s was also available painted as a civilian version. But even the military version had colorful touches. 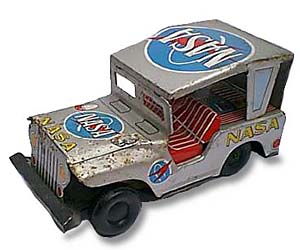 Talk about colorful. One of the most interesting aspects of collecting tinplate is the variety of fanciful paint schemes. Chances are, nobody paid for the rights to use decorations such as the NASA logo on this toy (from Pete Pearson's collection). 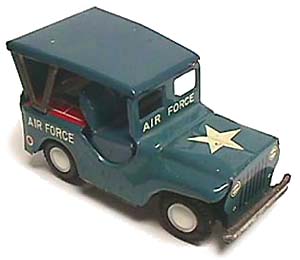 A plainer but slightly more realistic paint scheme is found on this U.S. Air Force version owned by Frank Sanborn. Frank found his in a "free" box at a yard sale, but these toys typically sell for US$20 or more. Some larger (8") tinplate toys, including driver figures, are valued at $50 or more. 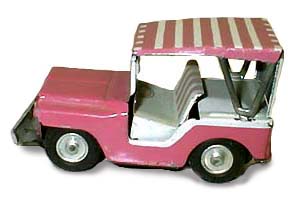 Although it doesn't seem likely Willys ever exported one to Japan, the pink CJ-3A Surrey Gala Jeeps were a natural for the tinplate manufacturers, who liked bright paint jobs. (This one belongs to Earl Colton of Statewide 4-Wheel Drive Supply in Phoenix, Arizona.)

The choices of prototypes for Japanese tinplate toys seem to reflect a fascination with American life. More recently, Japanese toy manufacturers have been producing toy Mitsubishi Jeeps, based on versions of the Jeep made in Japan. 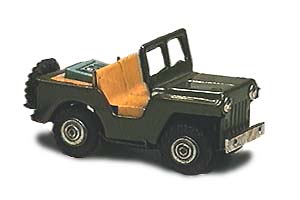 This slightly smaller 3-1/2" (9 cm) toy has more prototypical proportions than the examples above, and more realistic details such as a stamped grille, steering wheel and spare tire. There is no decoration except for the details painted on the radio equipment behind the seat. The friction motor is mounted under the hood, on the front axle. "Made in Japan" is stamped on the base, rather than being printed on the body. 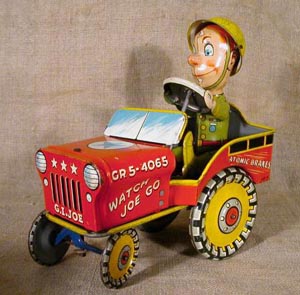 The tractor-style wheels of this toy are reminiscent of the 1940's Marx "Jumpin' Jeep" (see Early Jeep Toys and Memorabilia) but its front grille and hood appear to be based on the high-hood CJ-3B of the 1950s. It's probably a Japanese toy designed after the Mitsubishi version of the 3B. The "Atomic Brakes" are required because this 3B is powered not by the 4-cylinder Hurricane but is "Jet Propelled" and capable of "Supersonic Speed", as revealed in a right side view (50K JPEG).

Also on CJ3B.info, see full size Jeeps in Japan, made under licence by Mitsubishi from 1953-1998.