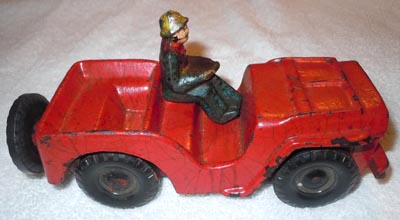 Gary Keating has an early Jeep toy which is unlike any other toy that we had seen here on The Toy Jeep Pages, and we've been trying to identify it as to date and manufacturer. In design and materials it's similar to some of the World War II-era toys, but the original red finish and the driver figure clearly identify it as a postwar civilian vehicle.

Tom Allen of Arizona Diecast noticed that the driver seems to be the same figure found on a hard rubber toy bulldozer (40K JPEG) made by Glolite, a manufacturer of Christmas lights -- see more photos at Mellow60's.com. 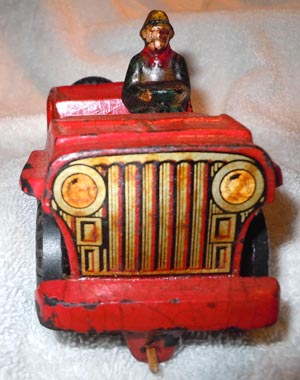 Gary says, "It has been in my collection for over 20 years, after I ran across it at the Brimfield Flea Market in Massachusetts. I just recently came across it again at home, while my 4-year-old grandson and I were looking at some toys in a bookcase.

"It looks to be old and may be one of the older Jeep toys I have seen. Why I say that, is its CJ-2A or MB/GPW windshield, and the material it's made of, which is some sort of hard but lightweight composite, or possibly Bakelite.

Tom Allen says, "I am pretty sure this was made by Glolite. It was a rubber toy -- like most from that era, hardened up."

Sure enough, an article on rubber toys at Planet Diecast says, "Other Glolite toys are a rare jeep, a lumber trailer which is towed behind the tractor-crawler, and a 155 MM Howitzer.... It is possible the toys were produced only in 1945 and 1946, which would explain their rarity."

Gary adds, "The Jeep's simple construction and the long wooden stick holding the wheels on are also unique to say the least." 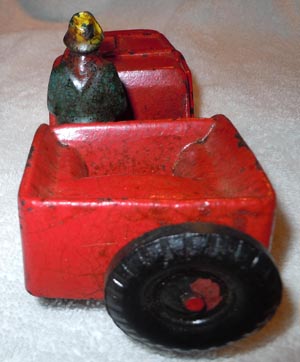 "In all my years of Jeep collecting, and all the time busy in search of what's out there, I have not run across another example of this toy or any variants of it. The closest thing that I know of is the M.A. Henry military toys, but the construction composite of those toys is lighter and thinner than this Jeep." 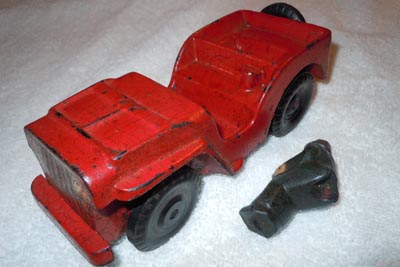 The simple one-piece design is reminiscent of the Dale World War II recognition models or the Ralstoy wooden models. So it seems likely that this toy was produced very shortly after the war, and would not have survived very long in the face of competition from more intricate and colorful plastic toys or Japanese lithographed tinplate.

But it also seems quite possible that this toy pre-dates the California Moulders plastic CJ-2, and may in fact be the first toy civilian Jeep.

Thanks to Gary Keating for the photos. Any further information is welcome. -- Derek Redmond