Although in the early 1940's they were still known by various names including "peeps", by 1943 they were becoming famous as "jeeps", and it wasn't long before toys depicting them became available. Here are some examples from the collection of Keith Buckley.

This is an unusual fiber-based toy, 3 1/2" long, with the word JEEP molded into the front bumper, and with two soldiers who are wearing British-style helmets. Jarek Skonieczny has discovered it was manufactured by M.A.Henry. The Wellmade Doll & Toy also manufactured a very similar toy (apparently copies of each other) in the same composition material, about twice as long.

The Dale Model Co of Chicago manufactured ID models that were given to the Allied forces during WWII. The models were used to train soldiers to identify which types of vehicle to fire upon. They are hollow cast from aluminum, and were available after the war as toys. This model was found in a Kalamazoo antique mall by Mike Boyink, new and in the box.

The Kempro Company of Chicago released one of the first jeep model kits, sold in the box shown here with what appears to be a Slat-Grille MB launching itself into the air. See also the box for a kit made by E.Z. Kraft, with a similar illustration (30K GIF).

Made by Baier Ges Gesch, this cast/machined Jeep is a cigarette case, lighter,and ashtray all in one. When you turn the door handle, the center of the hood pops up and the flame comes out. The late-forties versions had a solid aluminum windshield that was part of the casting, while the later version pictured here has a plastic windshield. The fenders are riveted on. The roof is labelled as a souvenir of Germany, 1951.

The "Jumpin Jeep" was a popular Marx toy, probably first made in the late 1940's. The rear wheels are the same as other larger early Marx Toys, and steel, not rubber. Marx went on to manufacture a large variety of Jeep toys.

The Jeep game was manufactured by the George S. Carrington Company, 2740 Fullerton Ave, Chicago, in 1943. The instructions state that "This pocket sized game board has been designed exclusively for men in the service. It is complete with pegs and instruction book. The novel tying tape to be fastened around the player's leg enables the games to be played in the cramped quarters where table space is not available or in the open field." 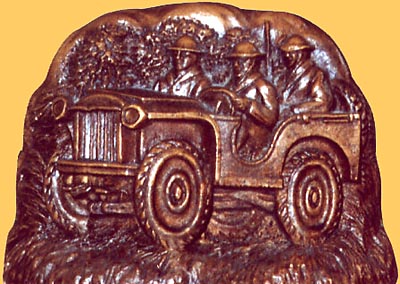 This is the rare pen holder depicting three soldiers in what appears to be an early Bantam. It is believed that these were given to the officers who were responsible for evaluating jeep prototypes. (Note the WWI helmets.)

This picture is from the announcement of a contest in Popular Science Monthly, August 1943: "Cash Prizes for your ideas on Peacetime Jobs for Jeeps. First prize, $100."

To get people thinking, Popular Science had this to say: "When the war ends, what will be done with all the jeeps? Neil F.Smith, of Cleveland Heights, Ohio, suggests that automobile manufacturers buy them up, paint them in bright colors, and add peacetime accessories like those shown above. Distributed to civilians,they would fill the gap while the car makers convert from war production."

Thanks to Keith Buckley for the photos. -- Derek Redmond

Elsewhere on the web, see what was perhaps the first toy jeep, in the Museum at American Dimestore.com.