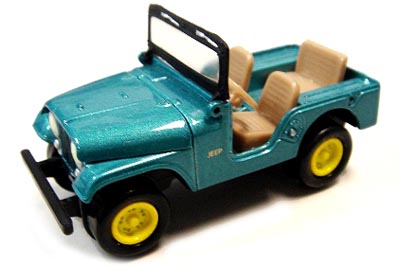 I've used plenty of space in the Toy Jeeps Pages to lament the early demise of the 1967 Matchbox No. 72 CJ-5, so I should make more than passing mention of Johnny Lightning's lengthy commitment to their diecast 1966 CJ-5. There were close to 20 variations of this casting released between 2004 and 2009, including this version with yellow wheels in their 2009 "40th Anniversary" series.

The Johnny Lightning name was 40 years old that year, although it wasn't in continuous production. The line was introduced by Topper Toys in 1969 to compete with Hot Wheels, putting the slogan "Beats Them All!" on every package. Topper folded in 1971, but eventually Playing Mantis re-introduced Johnny Lightning in 1994. It was purchased by RC2 Corp and then Tomy, who discontinued the brand in 2013. 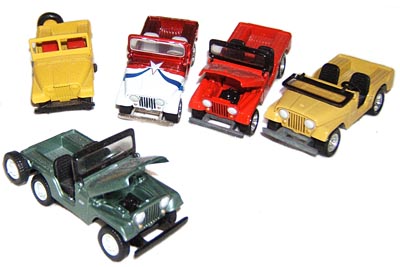 Although JL's focus was on muscle cars, the '66 Jeep kept popping up. Dennis Decklever took this photo of the yellow Matchbox No. 72 on the left, with several of the Johnny Lightning 5's, which unlike the Matchbox have opening hoods and folding windshields. In front is the version from the Classic Gold Collection (120K JPEG).

Dennis says, "The one in the Classic Gold line has the side spare, and I never looked under the hood until now, but there is a F-134 in this one, not the V6 as in the others!" 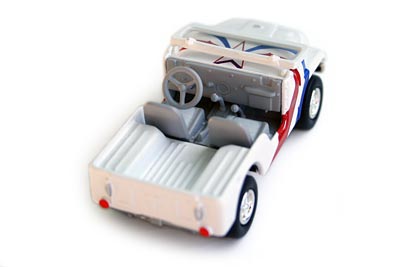 In addition to the engine under the hood (60K JPEG), the 1/64-scale CJ-5 has pretty decent interior detail, plus cast and painted taillights and tailgate chains on the rear. The tires are rubbery and treaded, but there is no spare.

This toy was aimed more at collectors' shelves than at sandboxes; the folding windshield is plastic, held on by a couple of friction-fit pins, and wouldn't survive outdoor play very long.

Marketing and packaging, as well as nostalgia, were major factors in Johnny Lightning's success with both adult collectors and kids. Here are some of the cards that were on store pegs in the 2000s:

Thanks to Dennis Decklever and Jarek Skonieczny. -- Derek Redmond

See also the Johnny Lightning MB and the Mid-Sixties Shootout: Jeep vs. Bronco on CJ3B.info.