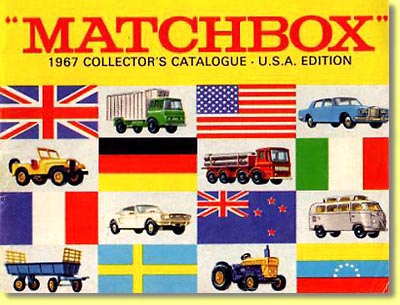 The yellow Matchbox CJ-5 released by Lesney Products in 1967 was the first of the modern-era "matchbox size" (approx. 1/56 scale) diecast toy Universal Jeeps, and set a standard that many later Jeep toys from Matchbox and other manufacturers did not meet.

In 1966 Lesney had been given a Queen's Award for Industry, and had established itself as a very successful company in the U.K., employing 3600 workers and producing over 100 million models that year. Its 1967 catalogue proudly advertised its international range, and featured illustrations of new models including the Jeep and the Ford Mustang. 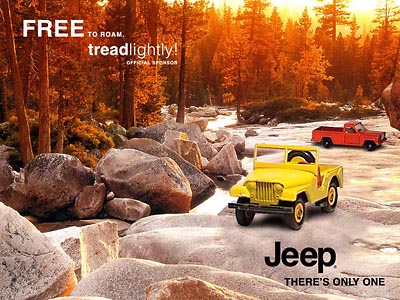 Lesney referred to No.72 as the "Standard Jeep" to differentiate it from the No.71 Jeep Gladiator Pickup which preceded it in the 1-75 Matchbox line (see the 1967 Matchbox Selector Chart, 60K GIF). By the mid-1960s the Kaiser Jeep Corporation had unfortunately stopped using the term "Universal Jeep" to advertise the CJ-5, and "Standard Jeep" was the best Lesney could come up with. 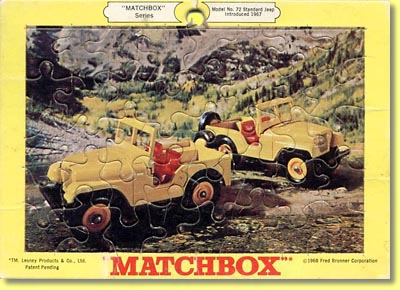 This 1969 Matchbox jigsaw puzzle illustrating the Standard Jeep in a mountain setting, was scanned for CJ3B.info by Bob and Shirley Keniston (see a larger copy of the scan, 120K JPEG). It carries the name of Fred Bronner, who was the primary importer of Matchbox to the U.S. in the 1950s (and often incorrectly identified as Fred Bonner). In 1969 the Fred Bronner Corporation was bought by Lesney and became Lesney Products (USA), with Fred as president. 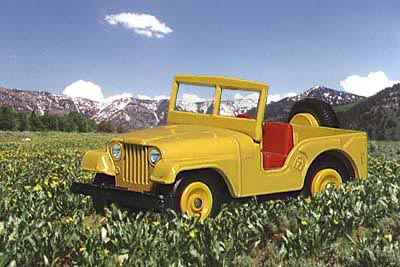 Although we asked in 2004 if Lesney may have produced a limited version of the CJ-5 in blue as a Royal Air Force Jeep, it seems pretty clear that No.72 was in fact only available from the factory in yellow. An olive drab trial version (20K JPEG) was reportedly sold at auction for £620 in 2004.

Seats and steering wheel were red plastic, and wheels initially were yellow plastic with removable tires. Note: worn or missing tires can be replaced by rubber O-rings with 14mm OD, 7mm ID and 3.5mm width.

This photo created in 1999 for CJ3B.info put No.72 into a background photo by Jolly Goodfellow. 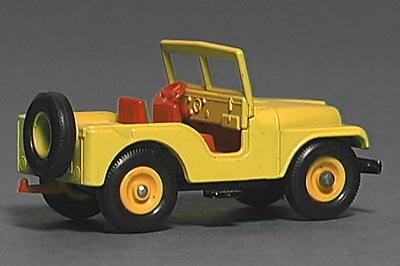 The casting was accurate in proportions and details, including side steps, body seams, glovebox, instrument cluster and windshield latches. The metal windshield frame did not fold however, and the split windshield with a center mullion may also seem to be a lapse in accuracy, for the sake of added strength. But in fact it's likely that the prototype CJ-5 used for measurements in the U.K. was the Kaiser export version which did have a two-pane windshield. 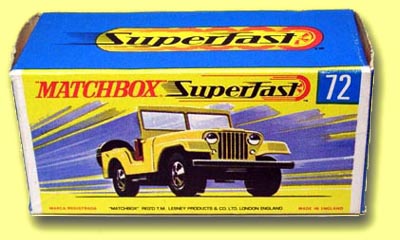 It's possible that No.72 would have eventually been released in other colors or versions. But big changes were about to happen at Matchbox. From 1969-71 Lesney converted their whole 1-75 Matchbox line, including the Jeep, to "Superfast" wheels on thinner wire axles. It seemed like an exciting change, and eventually there were even new boxes with flashy new illustrations. 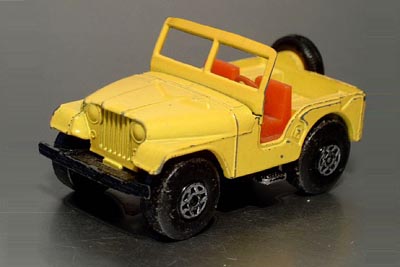 In reality, Superfast wheels were Lesney's superslow response to the debut of Mattel's "Hot Wheels". There were significant costs involved in this conversion, at the same time as Matchbox was trying to diversify into other kinds of toys. The increased competition from the brightly colored Hot Wheels, combined with labor problems and a fire at the new factory in Rochford, England (which is rumored to have destroyed some of the tooling for the Jeep), led to major financial problems for Matchbox in the 1970's. Lesney finally went bankrupt in 1982; the Matchbox name and assets were sold to the first of several new corporate owners, and production was moved to Asia.

Several new Matchbox Jeeps appeared over the years, but the classy little No.72 was history.

Thanks to Jarek Skonieczny, Steve Mark, and Bob and Shirley Keniston for their assistance. -- Derek Redmond