Hot Wheels Jeeps:
The Next 50 Years 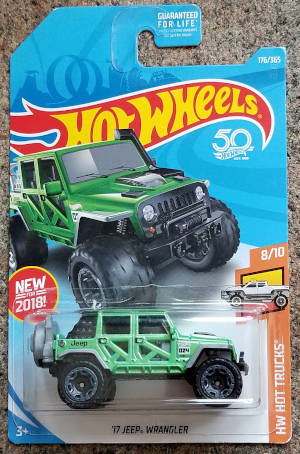 Hot Wheels celebrated their 50th Anniversary in 2018 by releasing a new Jeep casting based on a highly modified 2017 Jeep Wrangler. The four-door Jeep model features lots of off-road ready details such as intake snorkel, see-through "power bulge" hood, tubular doors, bead lock rims, heavy duty bumper/winch combination, rear cargo netting, and full size spare. It is nice to see Jeep and Hot Wheels logos on the side of the body. 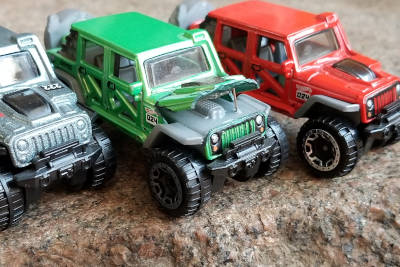 After some rock crawling, I popped the hood on my Wrangler to check out the engine, and found a large plastic cove, just like real Mopar Jeeps! 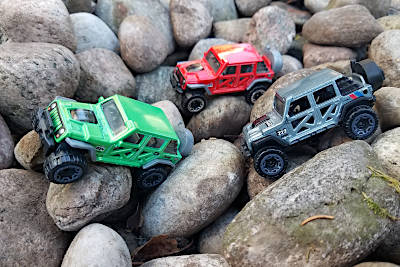 By 2018 Hot Wheels started to create more variations of their mainline cars by releasing alternate colours within the same year. This meant that the Wrangler could be found in four colors through 2018-2019: green, red, silver, and blue (and black with orange wheels in a 2020 5-pack.) We are looking forward to the return of this casting soon, perhaps with some "Real Riders" rubber tires. 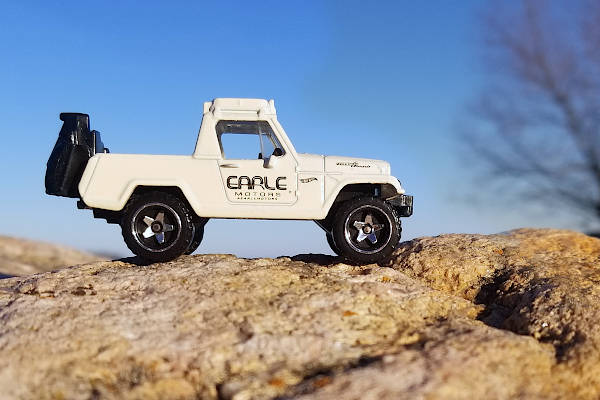 For the 2019 Hot Wheels mainline collection, Mattel included a new casting based on a vintage Kaiser Jeep model: the Jeepster Commando. The new casting appears to be based on a desert trail-ready Jeep with a winch, a roof rack with lights and a see-through sunroof, and is carrying a Ducati Scrambler across the rear bumper. 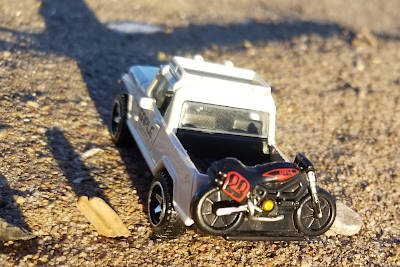 Alex's Jeep caught the attention of FourWheeler magazine during a Jeepster event in Moab, and was featured in the magazine in 2018.

Earle Motors modifies Ducati Scramblers for desert adventures and it is great that Mattel included a real-life Jeep enthusiast's restored vehicle in its model lineup. Earle Motors certainly deserves the credit for bringing this under-appreciated vintage model into our Hot Wheels Jeep collection. In 2019 it was also available in an alternate light green (150K JPEG). 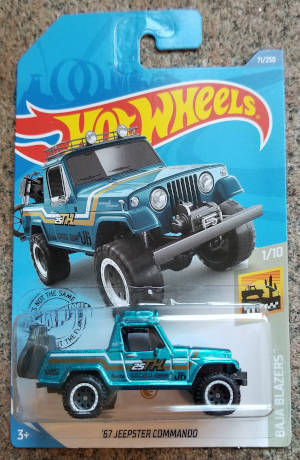 For 2020 the '67 Jeepster Commando was included in the mainline as a blue #25 version, and received the privilege of being released as a Super Treasure Hunt #25TH. The Super Treasure Hunt series started in 2007, and is randomly included in about 1 in 10 cases of the regular cars making them true "chase cars" since you can actually buy them for a dollar at Walmart, if you are lucky enough to find them hanging on a peg. The Super TH cars feature "Real Riders" rubber tires, glossy metallic "spectra flame" paint, and a high resale value amongst Hot Wheels collectors! 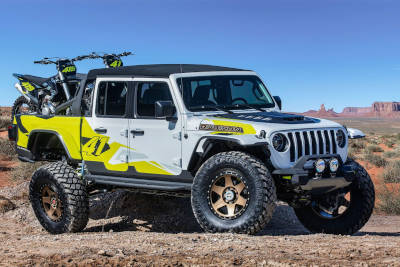 Jeep Corp regularly unveils concept vehicles at Easter Jeep Safari in Moab, and when it was time to uncover the much anticipated Gladiator pickup, Jeep was sure to include the dirt bike carrying capability into the "Flatbill" concept seen here -- pic courtesy of Mopar. This dirtbike concept was important enough for Jeep to feature dirtbike treads pressed into the pickup truck bed as if to say "place your toys here". 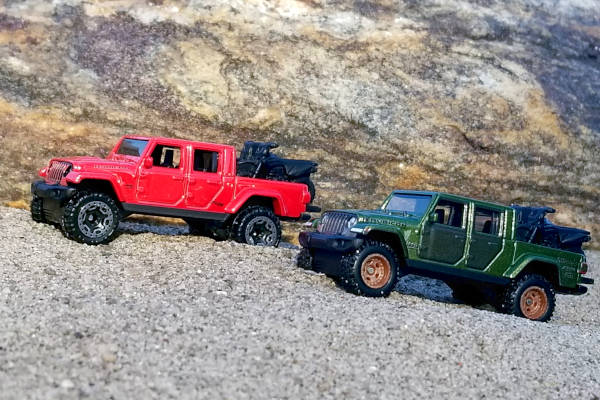 Hot Wheels was quick to pick up on the dirtbike significance by including two of them in the back of the new JT Gladiator model released in 2021. This very well detailed model includes an OEM style bumper and a Power Bulge hood with Rubicon logos. 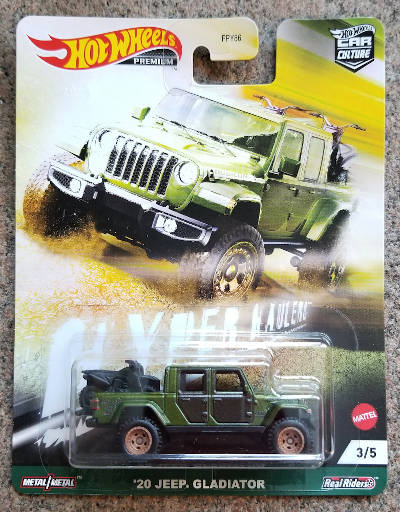 Thanks to Hot Wheels' multiple-variations-in-the-same-year feature, in the first two years the Gladiator could be found in multiple colors: red and tan (280K JPEG) in 2020, followed by blue, green, and white (360K JPEG) in 2021. (The white was a "Dollar General store exclusive.") Additionally, a black Borla version of the Gladiator was released in early 2022, but new Hot Wheels availability in North American stores temporarily stalled due to Covid-induced supply issues.

The ninth installment in the Fast and Furious movie franchise, F9: the Fast Saga features the good guys arriving in a monochrome-grey (700hp!) Grand Cherokee Trackhawk, and later driving a silver Gladiator pickup in the off-road chase scenes. 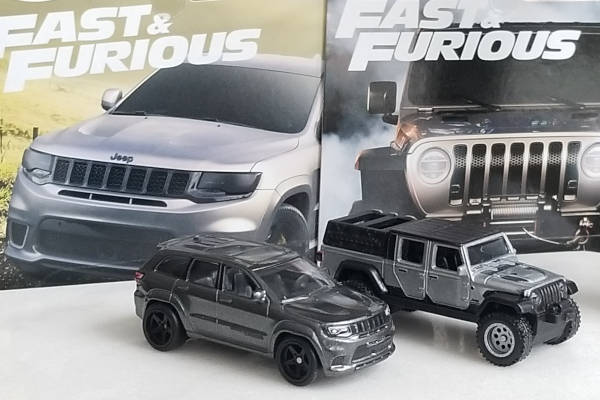 For 2021, Hot Wheels included both of these Jeeps in the Fast and Furious premium line that features "Real Riders" rubber tires. The Grand is a brand new, high quality casting that features a metal base, oversized rims, sunroof, and low profile rubber tires. Mattel's use of a metal base makes the Trackhawk feel like a true premium Hot Wheels model, echoing the Real Rider Jeeps of the 80s. 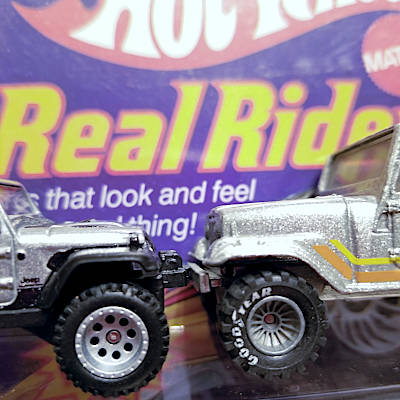 The Fast and Furious Jeep Gladiator model is based on the mainline casting but has been modified to F9 movie specs by closing the tailgate, adding a rear truck bed rack, custom front bumper and winch, and modifying the plastic base to increase track width. Combined with the oversized wheels and large rubber tires this F9 Gladiator begins to resemble the Real Riders Scrambler (60K JPEG) from the 1980s. 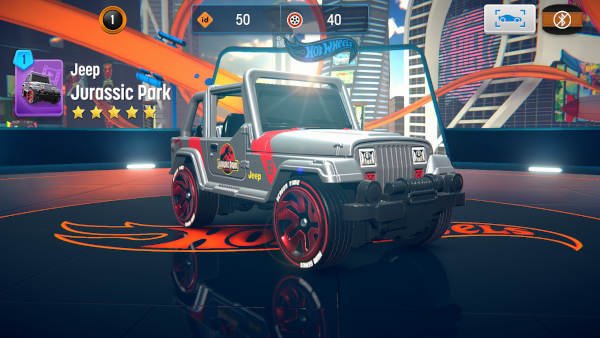 In 2019 Hot Wheels decided to try something new by integrating a new line of 1/64 diecasts into a game app. Unlike other race game apps, the players need to scan the cars they own into their virtual garage to race them. Each car has its own unique acceleration, top speed, and handling. The "id" cars are individually numbered and are scanned using the NFC (Near Field Communication) feature on your cellphone, similar to contactless payment apps. 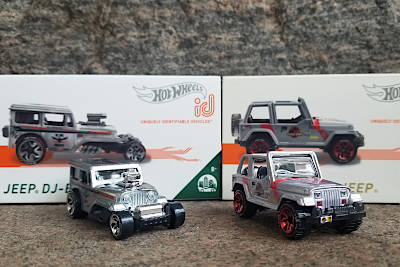 Each Hot Wheels "id" car has an RFID (Radio Frequency Identification) chip imbedded into the plastic base, similar to the tap chips on our credit and debit cards. Two Jeeps were included in the 2019 "id" Series 1: a drag racing Postal Jeep DJ-5 ("The Mailman") and a new Jurassic Park #18 Jeep YJ. 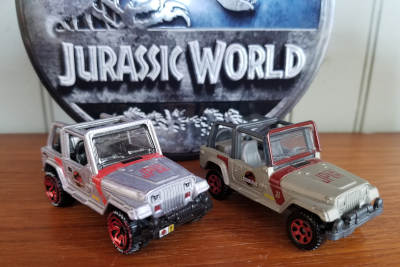 The Hot Wheels Jeep YJ is very similar to the Matchbox version, except that the Hot Wheels rollbar is part of the casting and it features more tampo details in the headlights, taillights, and Jurassic Park license plates. 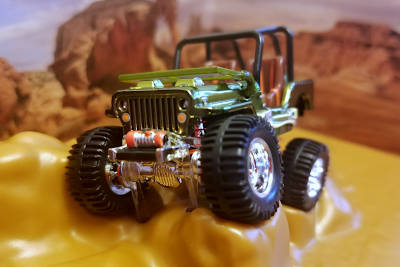 Mattel is very aware of the importance of adult collectors to the Hot Wheels brand and over 50 years has fine-tuned what works: "chase" Treasure Hunts (see the 2015 Jeep CJ-7) and Super Treasure Hunts (see the '67 Commando above.) In addition to the mainline cars, Hot Wheels produces premium sets like the Fast and Furious Jeeps, and in the early 2000s created a Red Line Club. Membership to the club allows you to buy limited edition cars (see the Mountain Goat.) To create exclusivity, these cars are numbered and capped at 20,000 units. 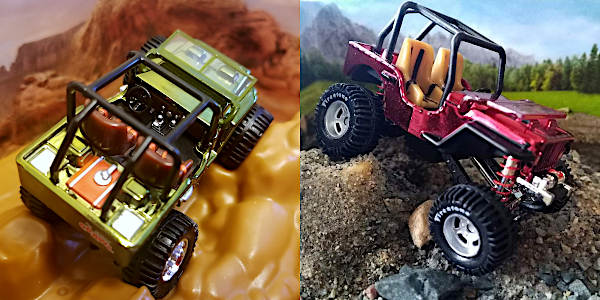 In 2021 Hot Wheels released a Willys MB rock crawler in Spectraflame Olive paint, and followed it up very shortly with a Spectraflame Cherry Red version. The green one sold out very quickly online as scalpers and bots beat many legitimate collectors.

Each casting features a unique adjustable-height suspension and fold-down windshield, and is mounted on an injection-molded plastic rock formation. Alan LaRue went one step further and customised the base of his red Willys RLC Jeep to create a very realistic display set, as seen above. 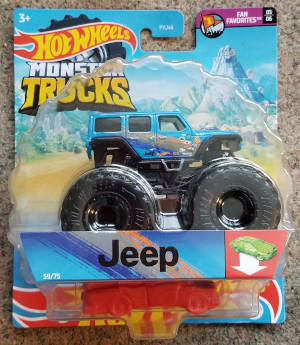 Even though collecting Hot Wheels has grown into a serious collector and re-seller market, in 2021 Mattel also reminded everyone that toy cars are meant to be fun by releasing a line of car-crushing monster trucks. The new casting, slightly oversized compared to other 1/64 diecasts, sits atop a tubular frame with freely articulating axles. The monster trucks come with a crushed car to drive over, a popular event at many Jeep shows. 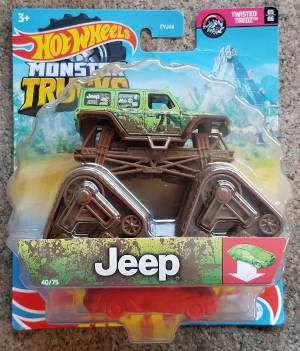 A second version of the Wrangler includes snowmobile/tank tracks instead of the monster sized wheels, a real world aftermarket product available for Jeeps and other SUVs. Check out some photos of Jeeps with Mattracks at Mattracks.co -- sure looks like a lot of fun in the snow!


Thanks to Jarek for the Hot Wheels update. -- Derek Redmond