Mattel Toys produced three Universal Jeep models in their "Hot Wheels" series during the 1970's and 80's. The stylized Grass Hopper was followed in the early 1980's by very nice models of the CJ-7 and the CJ-8 Scrambler, both of which were released in several variations. The toys are approximately 1/64 scale. 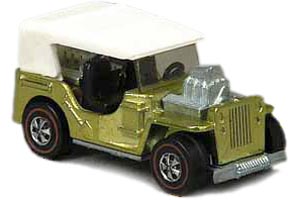 The 1971 Grass Hopper hot rod may have been based on the Willys MB or CJ-3B. The first casting (left) had dual V8 engines front and rear, and was painted a variety of colors. In 1974 the number of engines was reduced to one, a lime green paint scheme became standard, and the tools on the sides disappeared. In 1975, the engine disappeared under the hood, and the front grille was changed, perhaps to make it look more like a military jeep. 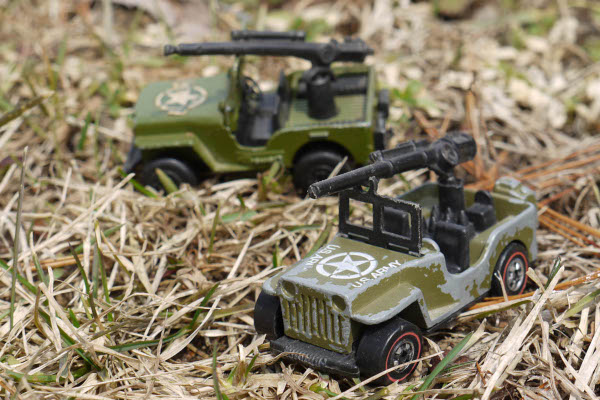 The Grass Hopper evolved into the 1975 "Gunslinger." As a model of the World War II jeep, it paled in comparison to the Matchbox MB with recoilless rifle (background.) The Hot Wheels version has a case of shells behind the front seats, molded into the plastic floor (30K JPEG). It has an inaccurate grille, which extends sideways under the headlights. The inappropriate "Redline" tires were standard on the early Hot Wheels vehicles. 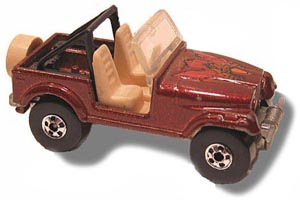 The Hot Wheels CJ-7, first released in 1981, has a plastic roll bar and a one-piece clear plastic windshield and frame. A fishing rod and tackle box are molded into the rear floor. It is the only diecast toy of this scale to have realistic metal bumperettes on the rear. These are molded as part of the base. 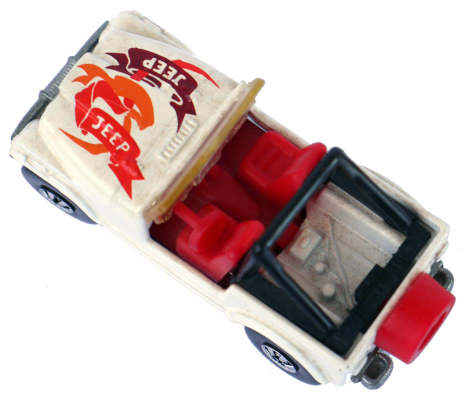 A number of paint variations exist, including:

There are also different wheel types on the CJ-7:

The realistic "Real Riders" rubber Goodyear tires found on Hot Wheels Jeeps from 1983 to 1987 came on grey "turbine" rims in 1983. In 1984 and after the rims were white. This explains why some colour variations are available with both types of rims, while others are not. 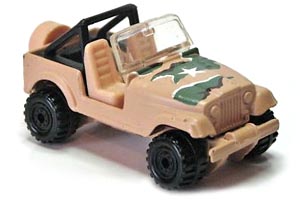 There are at least four variations on the markings on the underside: 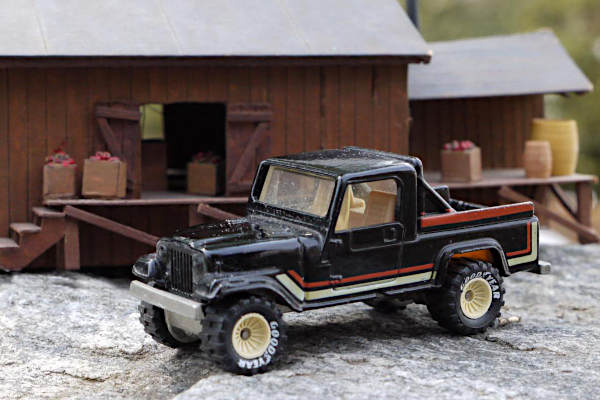 The Hot Wheels CJ-8 (seen in the photo unloading apples at the Redmond cider mill) first appeared in 1982, just a year after the AMC prototype. Like the CJ-7, it came with either the plastic tires or the rubber tires (which are probably the most realistic wheels ever put on a small diecast toy.)

The Scrambler has a halfcab hard top, and has an axe and some firewood (160K JPEG) molded into the plastic rear floor.

A 1998 version (#525) in black with red stripes had the grille "checkered" in an apparent attempt at not having to pay royalties to Chrysler for use of the trademarked grille. This dispute was apparently settled as of 2009, when the Scrambler was again re-released (see More Hot Wheels Jeeps.)

A Hot Wheels vehicle known as the "Trailbuster" or Roll Patrol (30K JPEG) and available in many variations, appears to be based on a Toyota J40 Land Cruiser rather than a Jeep.