GreenLight Collectibles released a 1/64-scale Postal Dispatcher Jeep in 2018 (see Postal Jeep Toys). They called it a 1971 DJ-5, although it was actually a DJ-5B. (A DJ-5 looks the same as a CJ-5, while a DJ-5B has a protruding front clip to accommodate the AMC straight 6 engine; see The DJ-5 Dispatchers on CJ3B.info.)

Since 2018 GreenLight has done several other versions, and most of the models carry the correct "Jeep Dispatcher 100" label on the cowl. 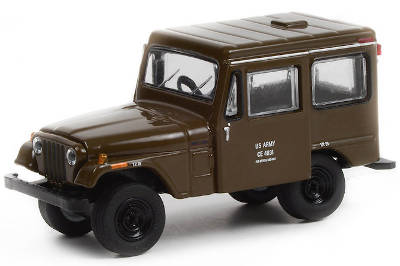 The odd thing about this one is the mud brown paint; it looks like a UPS Jeep. If we're lucky maybe they'll rethink this color before Series 1 ships. 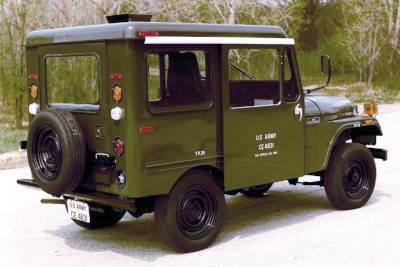 Somebody at GreenLight apparently found the faded print (200K JPEG) of this photo on the web, and based the brown paint decision on that. But the picture actually shows an Army DJ in the same glossy olive green used on the 1964 CJ-3Bs serving on Army bases.

By the way, I remember a brown Johnny Lightning WWII MB (110K JPEG) in the early 2000s, which came packaged with the shoulder patch of the North African Theater of Operations Headquarters Staff. I always wondered if that paint scheme was authentic to North Africa, but now I'm wondering if it might have been a similar mistake. 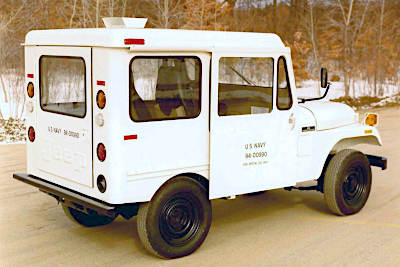 GreenLight probably wanted to find vehicles in colors other than Olive Drab, to make Battalion 64 more interesting. A little more research might have revealed that the Navy painted the DJ-5B in both Navy Blue and in the white seen here, and the Air Force had Dispatchers in Strata Blue.

As of late 2022 GreenLight has announced a USAF Air Police version of the DJ -- see Police Service Jeep Toys. 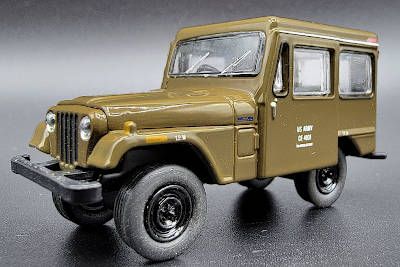 As of April 2022 the Army DJ has been released, and they have indeed replaced the brown with a slightly more accurate glossy olive green!

See also a rear view (250K JPEG). Thanks to Autumn Pillar of 7 Slot Collectibles for the photos. 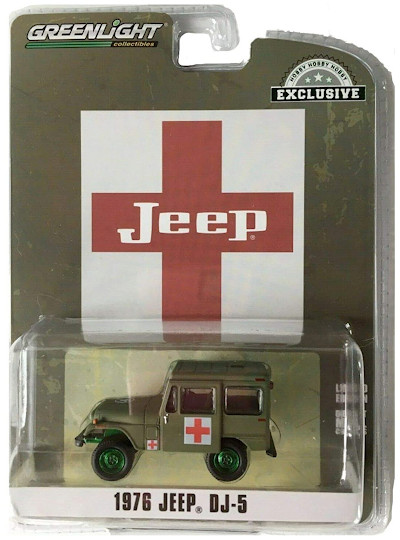 I think the first non-postal rendering of GreenLight's Dispatcher was the laughable "Army medic" concept. It was the kind of unrealistic short-person ambulance you expect to find only in a dollar store. The example seen here has the green wheels GreenLight puts on a small number of many of its models, creating an artificial variation that collectors will "chase" after.

A look at Willys Military Ambulances on CJ3B.info would have suggested some interesting real ambulance prototypes, like the high-roof CJ-3B from Vietnam, or the J8 ambulance built in Egypt and sold around the world. As the premier producer of Jeep models at the moment, let's hope GreenLight considers adding one of these to Battalion 64. 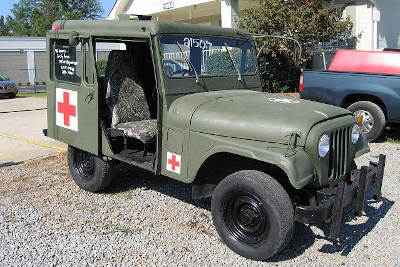 I realized later that in fact GreenLight had seen this phony restoration for sale on the web. A quick look at the miniature star on the hood, or all the OD-painted hardware, should tip you off that this is not an authentic paint job. I'm surprised GreenLight didn't include the pipes attached to the front bumper, or the $2150 on the windshield! 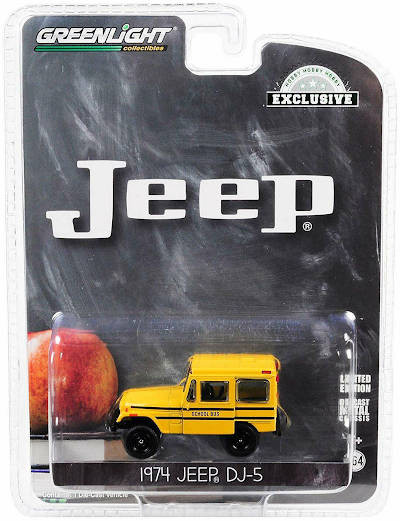 The next headshaker was the 1974 Jeep DJ-5 School Bus! At least it was pretty clear that this one was a joke, and they kept the joke going with the clever apple/blackboard blister pack, and a "chase" version that didn't just have green wheels, but was all green (100K JPEG). 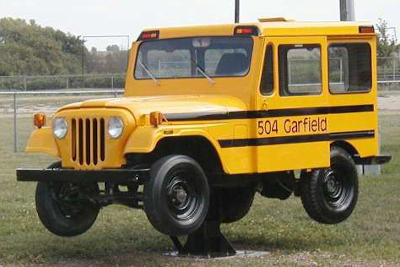 I figured the school bus idea must have come from the web too, and sure enough I found this picture on Pinterest, but unfortunately there were no details on where the poster had swiped the photo from, or who was the originator of the joke. 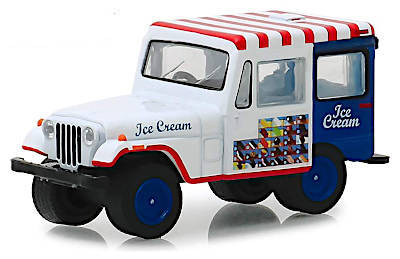 The Ice Cream truck was a logical choice, and well done. Ice cream trucks are a popular repurposing of retired postal Jeeps, and there are plenty of photos of such conversions on the web, but I don't think I have run across this exact one. The model is labelled as a 1975 DJ, which would make it a DJ-5D. 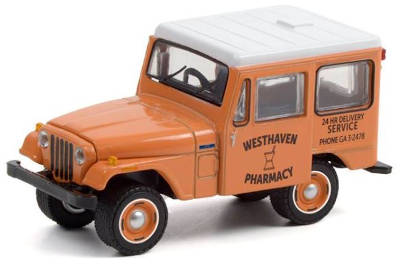 I've saved the best for last. The orange Westhaven Pharmacy Dispatcher comes from a classic Willys advertising postcard, and it's a great idea for a model. However, it was a DJ-3A, not a DJ-5B. Maybe it seems like I'm splitting hairs, and I guess the 20-year difference isn't important if you're not interested in Jeep history. (Certainly no worse than having a CJ-3B play General Patton's WWII ride in a multi-million-dollar movie.) But for a model aimed primarily at collectors, it seems sloppy. 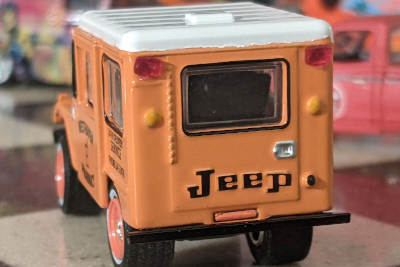 The hubcaps and pharmacy graphics are nice, but the "Jeep" rear door seen in this photo by William Matteson is one of many details of the Kaiser-era DJ-5B that are very different from a DJ-3A.

The model is from Series 9 (50K JPEG) of GreenLight's "Blue Collar" collection of hardworking vehicles. 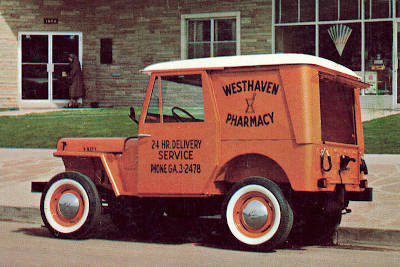 The original postcard promoted the DJ-3A's gas mileage (see the back of the postcard, 50K JPEG). The photo location was in Toledo, and Westhaven Pharmacy's brand new 24-hour delivery Jeep was perhaps just being delivered itself, since it didn't have a license plate yet. The telephone number GA3-2478 was likely a "GARFIELD" exchange chosen in honor of U.S. President James Garfield, who was from Ohio.


The news is not all bad. See some good GreenLight DJs in Police Service Jeep Toys. And keep your eyes open to see what they come up with for their next Dispatcher. -- Derek Redmond

See also The DJ-5 Dispatchers on CJ3B.info, for details on the different generations of DJ-5s from 1965-84.