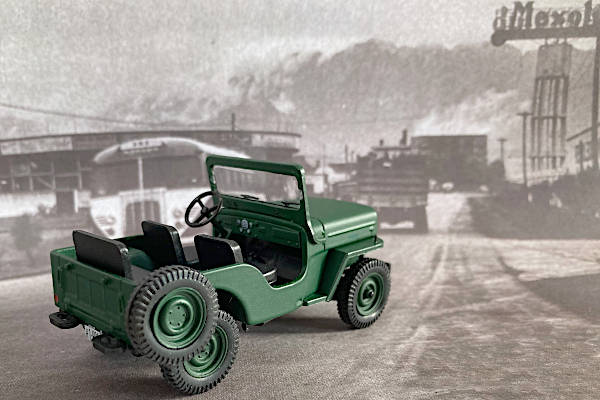 This nice diecast Willys CJ-3B and an accompanying booklet were sold in 2018 in Latin America, by Planeta-DeAgostini, a Spanish/Italian publisher. The model was manufactured for them in Bangladesh.

Christiàn Podlesker sent me one from Mexico, and I noticed immediately that the casting is different from two earlier 1/43-scale castings done by IXO in China. Those two were sold in several versions between about 2013-2017, also mostly in Latin America (see links at the bottom of this page.) 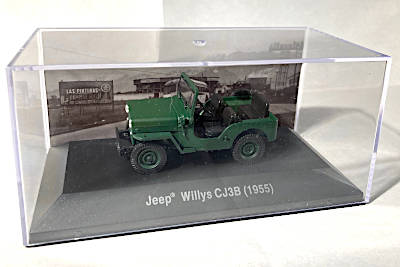 The Jeep is labelled 1955, and the dashboard includes the correct five gauges for a pre-1957 CJ-3B, although not the parking brake handle. The packaging includes a plastic display case, and a nice touch is the vintage background photo from Mexico, with signs for "Mexolube" and "Las Pinturas Pittsburgh."

The Jeep is attached to the base with two TA screws which require a small triangle-head screwdriver if you want to remove them. That's probably the only way you'll see that the model has an MB rather than CJ-3B exhaust system! 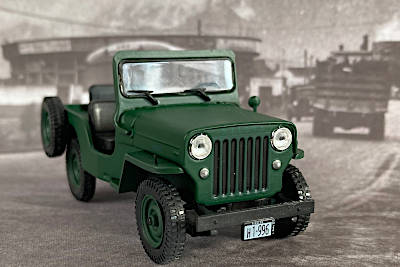 The windshield wipers are on the bottom, rather than the top-mounted wipers on the earlier IXO models. Unlike the IXO castings, this one includes indentations representing the drain slots below the door openings. The hood has molded latches but not hood blocks, and the front marker lights are painted, rather than transparent plastic. An odd detail is a pair of tiny pins sticking up from the front fenders; probably designed for mounting marker lamps or blackout lamps on a military version. 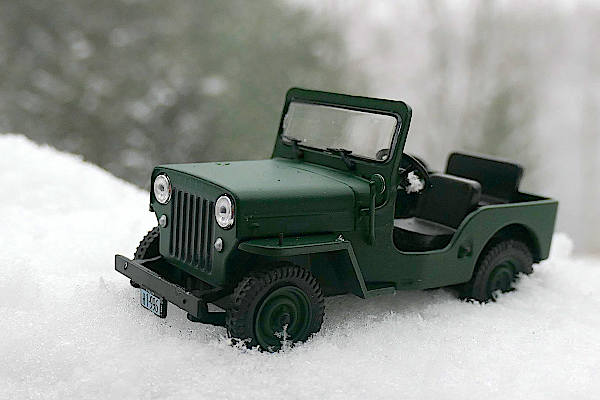 Since my model arrived just after our first snowfall here in eastern Canada, I thought it was the perfect opportunity to take the December 2022 cover photo for CJ3B.info. The Hidalgo state license plate is a little out of place though! 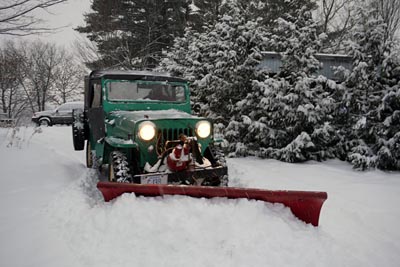 If I was looking for incorrect details on the model, I probably would comment on the fact the windshield is painted green instead of black. But since my own CJ-3B has a green windshield, I was happy with the all-green look. And it may well be correct for 3Bs assembled by SOMEX in Mexico.

(This photo of my snowplow in action comes from High Hood in the Snow.) 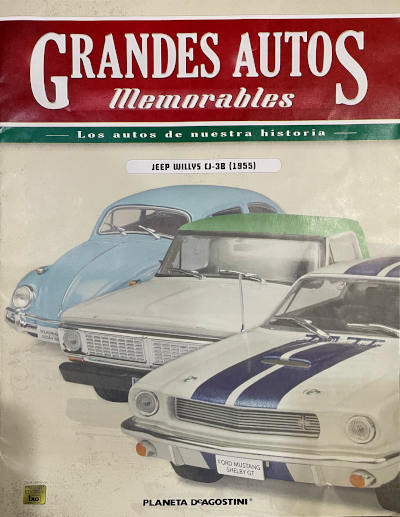 The front cover of the booklet that was originally sold with the 1955 Willys CJ-3B model indicates that it was part of a series called Grandes Autos Memorables, subtitled Los autos de nuestra historia ("The cars of our history.") This type of series of publications (known as "partworks") sold on newsstands with accompanying models is popular in Europe and Latin America.

According to the credits (180K JPEG) the booklet was written and published in 2018 in Barcelona, Spain by Planeta-DeAgostini, and imported into Mexico, Argentina and Peru. It was distributed in Mexico by Intermex.

A small logo in the bottom left corner states, "With the quality of Premium Edition IXO Models," suggesting that the model sold with the booklet was designed by IXO in China. However, the packaging (160K JPEG) for the model itself says "Made in Bangladesh," which presumably is why the casting is different from the earlier IXO CJ-3Bs. 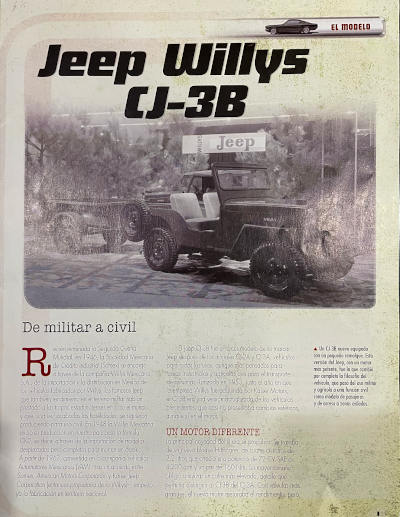 The first page of the booklet (left) has a capsule history of the arrival of Willys Jeeps in Mexico, and the changes introduced by Willys with the CJ-3B. It's illustrated with a photo of a CJ-3B in a dealer showroom in Lisbon, Portugal. (For details and a good copy of this photo, see CJ-3Bs on Display in Europe on CJ3B.info.)

Pages 2-3 (540K JPEG) continue a summary of the specifications and features of the CJ-3B, with color photos of a CJ-2A and a Mitsubishi J56.

Pages 4-5 (540K JPEG) provide some context for a 1955 Jeep, with the story of the beginnings of rock and roll, and in particular the history of rock in Mexico. (See also Billboard Magazine Top 20 of 1956 on CJ3B.info.)

There are four more pages in the booklet, with the story of the Volkswagen Combi Van, another model in the series. 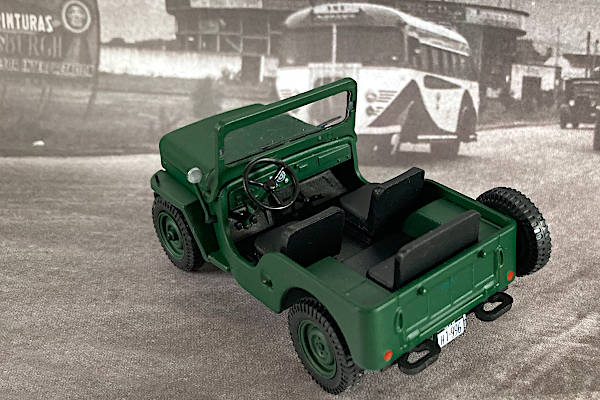 This view shows the pretty accurate 1:43 interior (except for the lack of a handbrake.) The raised panel on the passenger side of the dash represents the Willys dash plate -- too bad they didn't put some nice detail on there, the way they did on the gauges.

Those two bumps on the tailgate are probably to mount a spare and jerry can on a military version. Let's hope Planeta-DeAgostini decides to do one, maybe an Argentine Army M606! They can check CJ3B.info to get correct information, the way IXO did for their Premium X versions (see below.)


Overall, this is a beautiful little model of a 1955 CJ-3B. Thanks to Christiàn for finding it and sending it from Mexico. -- Derek Redmond