The classic amusement park carousel or "merry-go-round" was a rotating platform filled with horses which moved up and down on poles as the carousel turned. For centuries children have enjoyed these devices, operated by human or animal power, then later steam power and finally electric motors. Sometimes there would be other animals in addition to horses. Little automobiles, airplanes or boats are also popular with kids, and it's not surprising that Jeeps are sometimes included. Here are a few examples. 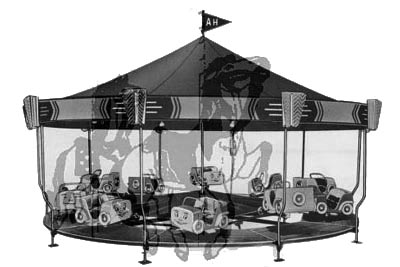 The "Kiddie Jeep Ride" was one of many carousel and roller-coaster rides built by the Allen Herschell Company of North Tonawanda NY. The Jeep version of the ride appears in only one edition of the Allen Herschell catalogue, apparently from the 1950s, although similar rides including sports cars, boats or army tanks, were perennial favorites.

The catalogue says: "Not only does this sensational ride provide the conventional forward movement of the cars, but the circular undulated track produces an 'up-and-down' motion while cars rotate gently by gravity. Together they develop a safe, 'hang-onto-your-hat' ride that thrills the youngsters down to the tips of their toes." 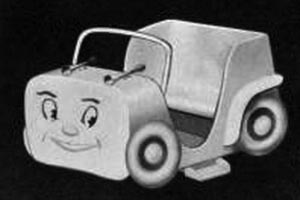 The Jeep cars in the Herschell ride were sheet aluminum, riveted and Heliarc welded, with plywood floor and cast aluminum step. Also bulb horns and a painted face. The wheels were decorative only, as the cars rotated and floated up and down on tubular steel arms, above a wooden platform. See complete specifications (120K JPEG) including a photo of the central drive unit. Illustrations courtesy of the Allan Herschell Ride Archive at NewYorkHeritage.org, and the Herschell Carrousel Factory Museum. 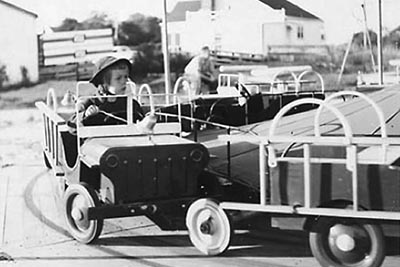 Other rides, without the up-and-down action, utilized standard steel Jeep pedal cars with the pedals removed. This carousel in an undated photo seems to be part of a travelling fair, probably in the 1950s. It features Jeep fire engines based on the Junior-Pro all-steel pedal-drive Jeep built in St. Louis starting in 1947. It's not clear whether the ladders and bells were added to the red Junior-Pros just for this ride, or whether the company may have actually built some as fire engines. See also another photo (50K JPEG). 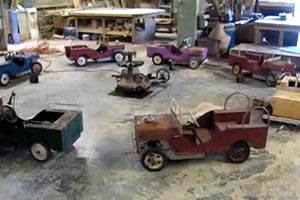 This photo shows a somewhat complete, surviving example of the same ride, with red fire engines alternating with Junior-Pro Jeeps in other colors. See also the central electric drive unit (50K JPEG) which moves arms connected to single wheels (see above) which pull the cars. The belt and pulley drive is quite different from the gear reduction system of the Herschell Kiddie Jeep Ride. The manufacturer is unknown. 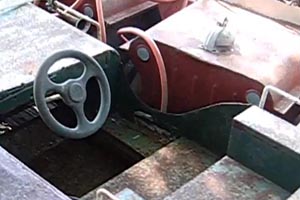 The Jeeps have the distinctive front grille of the Junior-Pro pedal Jeep. These pictures come from a video posted on YouTube in 2011, including a look at the whole ride loaded on a trailer (50K JPEG). Another angle on the green Jeep (50K JPEG) shows its bulb horn as a noisemaking alternative to the fire engine bell. 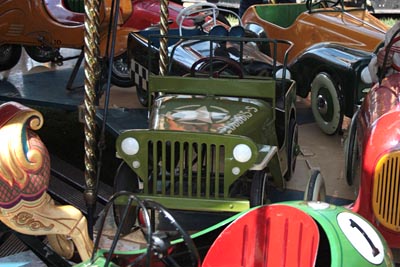 Another commercial pedal car serving on a carousel is this mint-condition Triang Jeep, photographed with a fleet of other vehicles at the famous British travelling fair called Carters Steam Fair, in London, England in 2010. 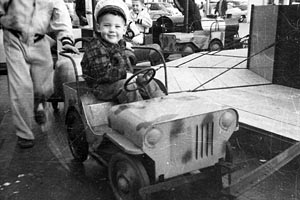 Here's a photo taken at an unknown location, probably in the 1950s. The Jeep looks like a commercial pedal car, but doesn't match any of the makes seen on our Pedal-Drive Jeeps page, or other Unidentified Pedal-Drive Jeeps. 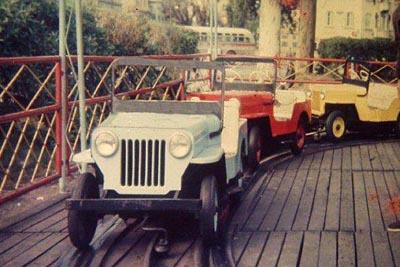 This one I would really like more information about; where was this ride located? The Jeeps appear to be mounted on rails and driven by a central cable, rather than on a rotating platform. The near-perfect half-scale CJ-3B replicas, and the bus in the background, suggest that this dates from the 1950s. 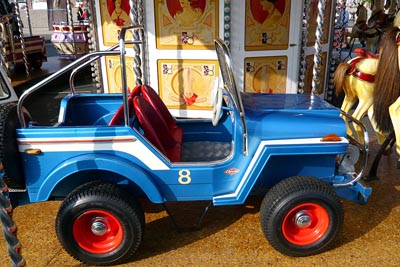 This recent example is part of a classic carousel including vehicles and horses, photographed in the Netherlands in 2008 by oerendhard1 on Flickr. It's fabricated from steel and branded "L'Autopede" and like most vehicles built for amusement parks, it has two steering wheels.

Newer examples tend to have fiberglass bodies, and plenty of lights to add kiddie appeal, like a safari vehicle (600K JPEG) which could be based on a MUTT. 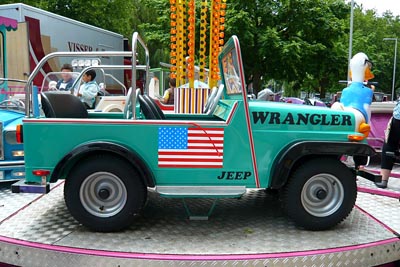 No mistaking the Wrangler inspiration here. The high sides give the parents peace of mind, and look exactly like Wrangler half doors. But the steering wheels for back seat drivers are not prototypical! Part of the same carousel is a Police Jeep (600K JPEG). Again from oerendhard1. 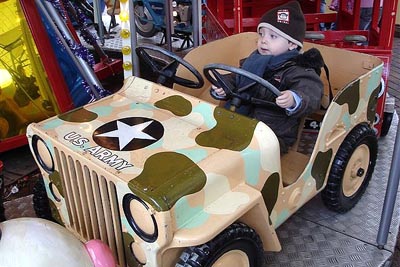 No information available on this 2007 photo from the UK, but the merry-go-round looks like a nice mixture of animals and vehicles. 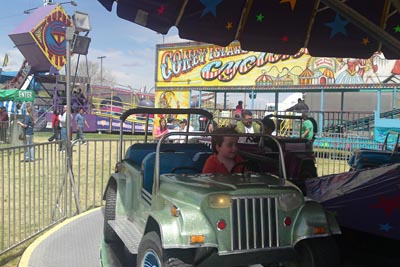 Flatfenders seem to be the most popular style of Jeep, probably because they're simpler to fabricate, but here's a four-seater fiberglass YJ Wrangler, photographed in 2011 at a travelling fair in Carson City, Nevada. Looks like a whole carousel of Jeeps.

Thanks to graguitar, glitzypursegirl and messy_beast on Flickr. Thanks to Dave Ketterman for spotting the YouTube video. -- Derek Redmond