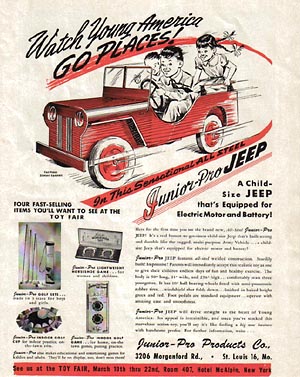 After World War II, the race by Willys to exploit the wartime fame of the jeep in the civilian market, was equalled only by the competition of toy manufacturers to satisfy youngsters all over the world who were asking Santa for jeep toys.

The Junior-Pro Jeep was built in St. Louis starting in 1947. It had foot pedal drive as standard equipment, but it was also "equipped for electric motor and battery." Glenn Byron in Maine found this ad for the Junior-Pro from the March, 1947 issue of Toys and Novelties magazine. It encourages dealers to stock this "brand new, all-steel" toy, and to see it at the Toy Fair, March 10-22 in New York, along with several golf and horseshoe toys from Junior-Pro Products. The front grille in the illustration does not have the protruding stamped lines seen in the production version below. 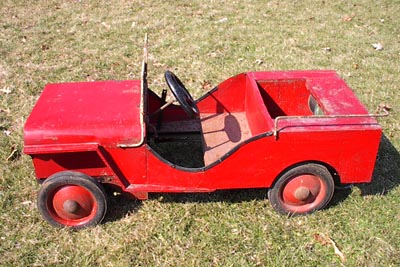 As the three children in the artist's illustration above would suggest, the Junior-Pro was larger than most pedal cars, at 47-1/2" long by 20-1/2" wide.

This Junior-Pro with optional electric power was photographed by Melissa Burt in Ohio, and had been stored indoors since 1967. See a closer view of the motor (100K JPEG) mounted under the rear seat. 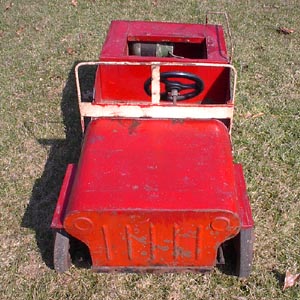 The photos show that the production version had a simpler stamped front grille. A couple of bolt holes suggest that there may have been a bumper attached, as shown in the ad. 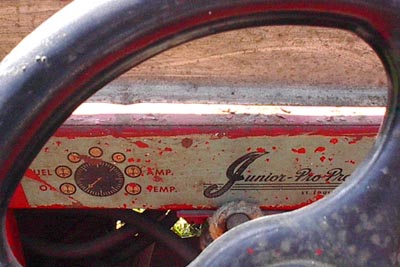 The steering wheel is very nicely designed, and unlike those found on some other brands of pedal Jeeps, it seems to be solid enough to take the kind of abuse that kids are likely to dish out.

The dashboard features a large decal with a Junior-Pro logo and a quite accurate set of gauges including the instrument lamp, throttle and choke, and the fuel/oil/amp/temp gauges in their correct locations around the speedometer. 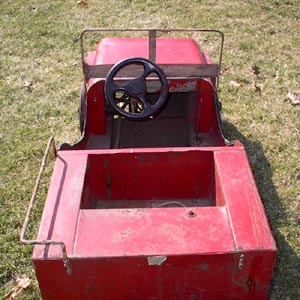 There's not much information available about Junior-Pro Products, so they may not have been around for very long. Apparently they produced mostly small toys and games. It's possible that their attempt to get into the competitive pedal car market might have been a factor in an early demise for the company. 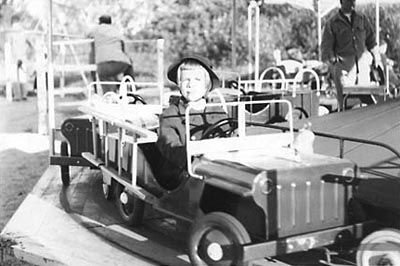 This undated photo shows a fun-fair carousel, with fire Jeeps apparently built from Junior-Pro pedal Jeeps. It's not clear whether these were built as fire engines by the company in St. Louis, or modified for the carousel. See more photos in Carousel Jeeps.

Thanks to Melissa Burt, and to Glenn Byron for scanning the ad. -- Derek Redmond