Three brothers formed toy company Lines Bros. Ltd. in the UK shortly after World War I. Since three lines make a triangle, they came up with the brand name Tri-ang and created a company logo (40K JPEG) in the shape of a triangle. In the 1950s they were one of, if not the largest toy company in the world, but folded in 1971. 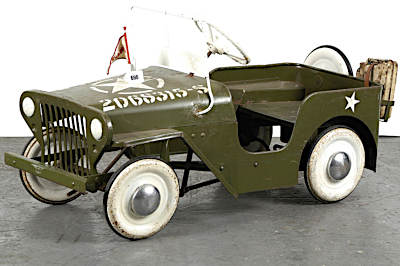 Tri-ang pedal cars can be recognized by their narrow rubber tires on large metal wheels. The Jeeps have distinctive headlights which extend sideways beyond the hood. This design probably allowed them to use some of the same bodywork used on other cars such as the "Comet", seen in white in the 1959 Christmas catalogue (50K JPEG), which surprisingly does not include a pedal Jeep. 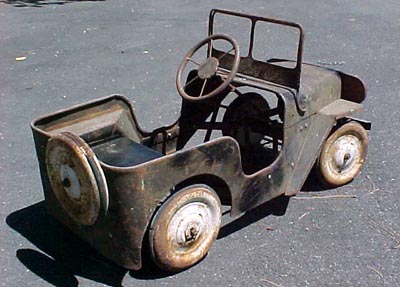 Frank Steele in Oregon is a veteran restorer of military vehicles who acquired this Tri-ang at a swap meet, with the intention of restoring it for display with his full-size jeep at shows. He provides the following dimensions: "The tires are about 7+ inches in diameter and the grille has the correct nine slots for a WW II jeep. The jeep is approximately 36 inches from the front bumper to the rear of the body, and approximately 16 inches across the seating area and across the front flat fenders.

"There are two decals on the rear body; the upper smaller one has a silver/gray background and relates to lubricating the jeep, and the remains of the lower 'Tri-ang' decal is illegible." 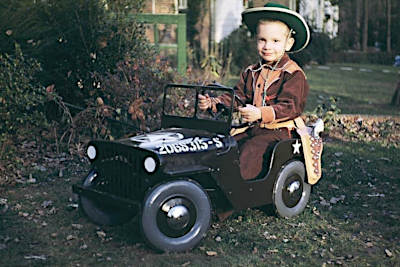 Tri-ang products were sold in the US as well as the UK, and this undated slide shows what appears to be an American youngster in his brand new Jeep.

A front view (50K JPEG) of another Tri-ang gives a good look at the grille, which is cut out, rather than just painted or stamped as was the case on most other pedal Jeeps. A rear view (50K JPEG) shows a steering wheel different from the example above. The jerry can bracket held a jerry can about 7 inches high -- original ones are hard to find. 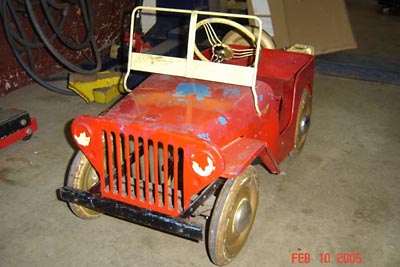 The U.S. Army version of the toy, in olive drab with a white star on the hood, was perhaps the most popular, but the Tri-ang was also available in this red Civilian Jeep paint job, probably based on the Willys CJ-2A in Harvard Red with Autumn Yellow wheels. There may have also been other colors.

Paul Short in Canada has since refinished this Tri-ang as a Canadian Forces medic's Jeep: see Tri-ang Jeep Ready for Action -- it's complete with original jerry can. 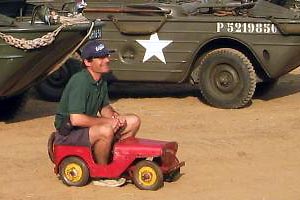 This gives a good sense of how small the toys really are: Jérôme Stevens posed for a picture in a red Tri-ang he bought at the 2003 Beltring military vehicles show in the UK. See more of the impressive Beltring show in the large version of the photo (100K JPEG.) 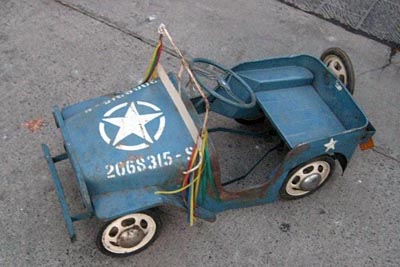 Some Tri-ang Jeeps found in North America have perforated wheels. Luis Casarin sent this photo of a nice Air Force Blue example, and says the wheels are clearly marked as coming from the Lines Bros. factory in the U.K. Like many people, Luis is looking for the jerry can originally mounted on the rear. See also a closeup of the Tri-ang decal on the rear, and a front view photo (100K JPEGs).

It's not clear if the perforated wheels might indicate a particular date of manufacture. David Stillson sent a 1957 photo of himself (70K JPEG) and says his brother had their dark blue Jeep for a while before that. 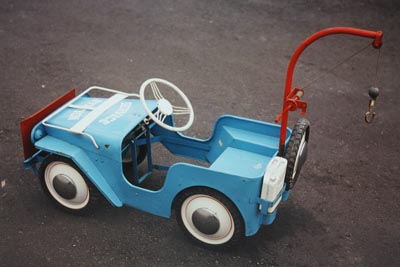 Tri-ang toys were sold under the Thistle name in Canada -- see an archival photo of their storefront in Vancouver (120K JPEG). Peter Zimmermann of Vintage Toy Oasis in Toronto purchased this lovely "Thistle Service Station" tow truck/snowplow in 1998, and sold it shortly afterward to a collector near Toronto. The original owner had grown up in a large house and had never taken the toy outdoors. 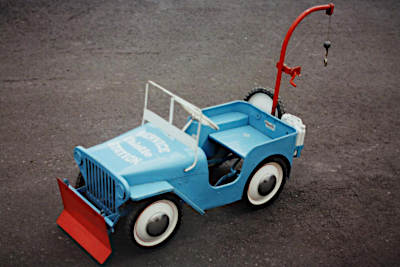 The snowplow folds down for plowing and up for driving (60K JPEG). The Tri-ang snowplow may be unique to Canada. Interestingly, its blue and orange paint scheme is similar to the much smaller Tonka Toy wrecker made in Canada (40K JPEG). 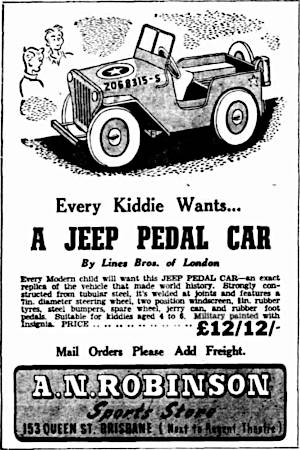 Tri-ang toys were imported into Australia as early as 1947, as seen in this September 1947 ad, but encountered competition from local companies such as Cyclops and Peerless. Research for an article published by the Canberra Bicycle Museum shows that Lines Bros. purchased Cyclops in 1955, forming Cyclops & Lines Bros. (Aust.) Ltd.   After the financial collapse of Lines Bros. in 1971, Tube Investments (T. I. Ltd.) purchased Cyclops Tri-ang, as it was then known, and Cyclops continued business as usual. 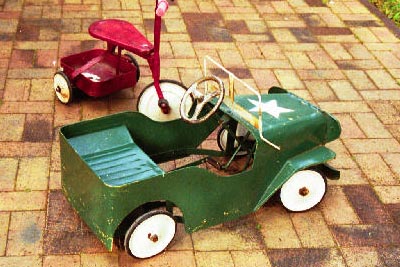 The Cyclops Jeeps included a fire chief model as well as army Jeeps. The Cyclops motto was "Built to Last" and this example (c.1964) belonging to Clinton Kempnich has lasted. It also shows a different steering wheel design, and lacks the spare wheel on the rear. 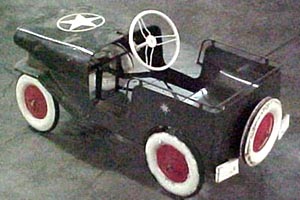 "The South Africans were lucky, being offered two different Jeeps known as the Junior Jeep and the Major Jeep. The main difference between the SA Jeeps and the others is that the hood extends past the headlamps, while the other Jeeps stops short. ... The Major Jeep used large balloon metal pressed rims similar to the UK Jeeps." 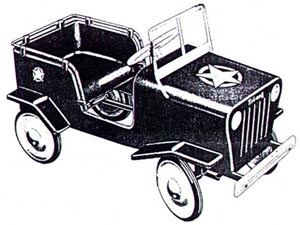 The smaller Junior Jeep had exterior fenders front and rear. Wheels on the Junior were apparently similar to those used on the Tri-ang "Duke" cars. Illustrations courtesy of "Pedal Car News". 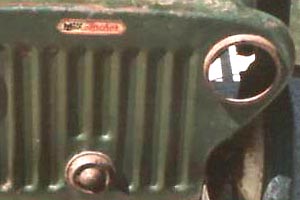 Colin Peabody found this Jeep in Oregon -- it's similar in design to the Tri-ang but with some additional features. An electric horn is mounted in the middle of the grille, which has the openings stamped but not cut out. The headlight openings are cut out, apparently to accept battery-powered headlights. On the top front of the grille, centered, is a sticker with the word "Anchor" and a logo consisting of a black cat, a checkered flag and an anchor. 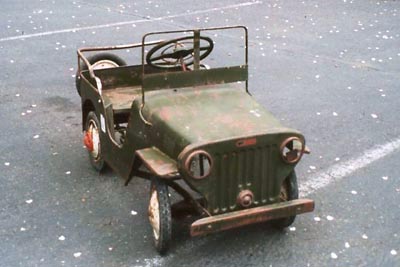 The steering wheel has a chrome ring and button to activate the horn. There is also a chrome handrail around the rear of the body. See a photo of the interior (60K JPEG).

It's unclear whether the company name Anchor was another subsidiary of Lines Bros.   Peter van den Berg commented on a "Pedal Car News" web page: "We've since found three more Anchor Jeeps that sold on eBay over the last five years. This is definitely a previously unknown make of car. No details found yet on where they originated from. One car is in Germany, one in the USA and one in Australia, so no leads there."