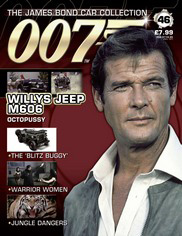 Through 115 issues, the British magazine James Bond Car Collection offered background and details on many of the vehicles appearing in the James Bond 007 movie series. The big selling point was a small diecast model included with each issue. Of course their staple was the various sports cars driven by the hero, but a number of other oddball vehicles were also featured. Issue 46 in 2008 took a look at one of the Jeeps from Octopussy (1983).

See CJ-007 on CJ3B.info for photos of several Jeeps which appear in Octopussy. 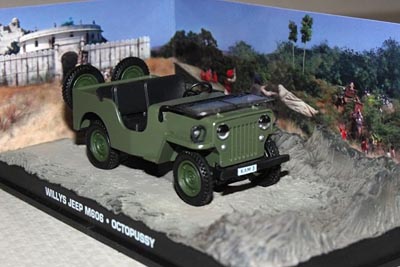 This model and diorama sold with the magazine represents the scene in which Bond is chased through the brush by hunters on elephants. The Jeep in the movie is actually a CJ-3B built by Mahindra in India, but the James Bond Car Collection unfortunately gets off on the wrong foot altogether by referring to it as a "Willys Jeep M606," apparently because the green color gives it a military look.

The Jeep makes a brief appearance in the film with 007 playing dead inside a body bag in the back seat (50K JPEG). 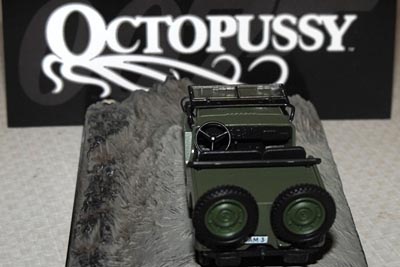 The model is made by Universal Hobbies. Jarek Skonieczny photographed it for us, and says, "The Jeep is diecast with rubber tires, has a flat deck over the rear seat area where James Bond is bundled up in the movie. The plastic windshield is glued in the down position, the dash has some detail but no colour. The headlights are neat; clear plastic with black eyelids painted on. A bit of effort went into trying to make the model look like the movie Jeep which has the headlight eyelids, a 60/40 split seat, and two spares." 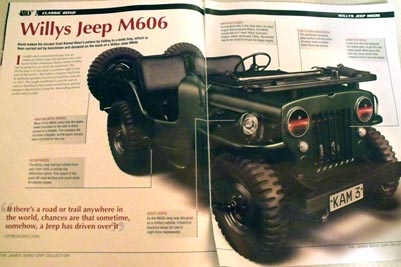 This illustration has some correct and some misleading information, but it's unfortunate that the research to simply ID the model correctly was not done (see CJ-3B or M606? on CJ3B.info.) Jarek says, "Available in England on newstands, the 16-page 'magazine' is mostly movie info fluff, with a Willys MB being shown in the centerfold labelled as an M606, and some brief Jeep history."

Come to think of it, it might have made more sense for the James Bond Car Collection to feature the Willys MB which appears in Octopussy, in the lengthy chase through the streets of Delhi. As usual, the villains drive the jeep, while in that scene 007 is in a minicab -- see CJ-007 on CJ3B.info.

Thanks to Jarek for the photos. -- Derek Redmond

See also a Johnny Lightning MB marketed as the Jeep from the 1989 film Licence to Kill.

Also on CJ3B.info, see more CJ-3Bs in the Movies and Mahindra Jeeps.