Valve Adjustment on the F-134 Hurricane

The following instructions were sourced from the excellent videos by Doug Hoffman on YouTube (highly recommended to watch them before you start):

I decided to write these instructions because the two videos show a partly disassembled engine on a stand and not in the engine compartment. The engine I have is a F134 with a Solex carburetor. I didn't have to remove a fender or the exhaust manifold to do the work. 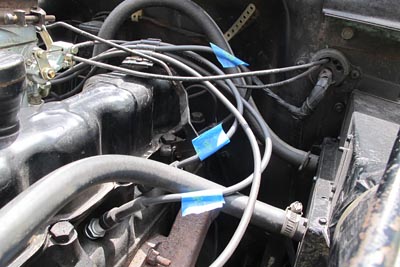 2. Remove all 4 plugs to relieve compression. Loosely insert a clean rag in the plug holes to prevent dirt from getting in there. 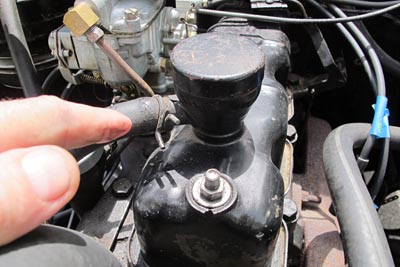 3. Disconnect the hose to the breather 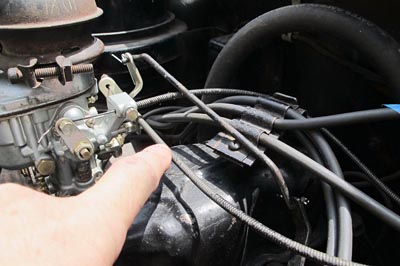 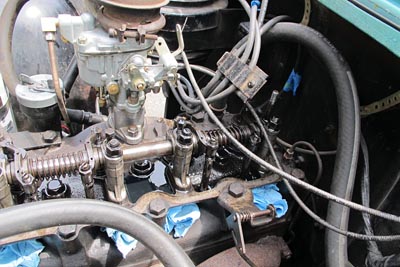 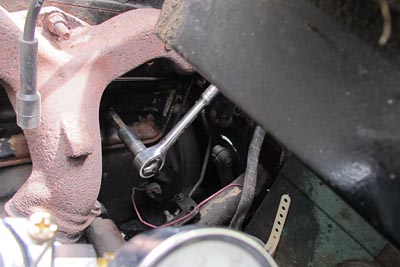 7. Remove the side valve cover by removing the two bolts holding the cover. You can get the cover out by sliding it toward the front of the engine and over the fuel pump.

I had a problem clearing the fuel pump due to the gas lines. I have a fuel pressure regulator on my Jeep so my fuel lines are not routed the same as a stock engine. In my case I had to disconnect the fuel line from the fuel pump (line from the tank to the pump) to make some room. The PVC valve assembly on my jeep is mounted at the bottom of the carburetor so the front bolt for the cover is free of piping. 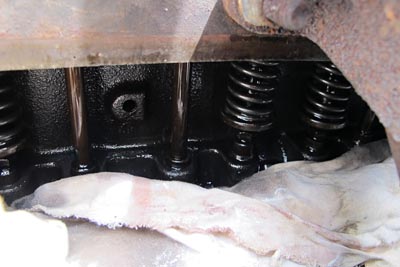 8. Put a shop rag at the bottom of the block below the side valves, to avoid losing parts in there. 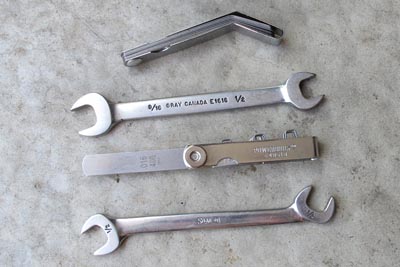 9. Assemble the following tools:
a. Two 1/2" Wrenches (the "Snap On" bottom wrench may have helped the job? I'm not sure since I didn't try with a straight wrench.)
b. Flat blade screwdriver for the intake
c. Feeler gauge (I use a flat one for the exhaust and a bent one for the intake) 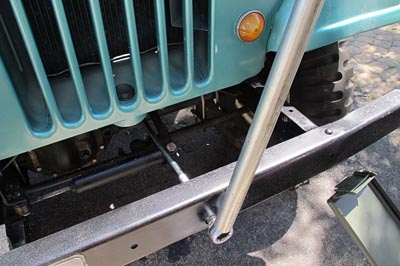 d. 1-3/8" socket, a 3/4" to 1/2" adaptor, 1/2" extension and a 1/2" ratchet, to turn the engine over. I also use a pipe extension so I can reach while watching what was going on. I slide the assemby through the hole in the bumper which is directly in line with the crankshaft pulley.

e. I also use a powerful flashlight to help seeing the tappet position. 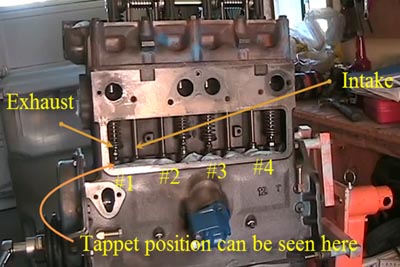 This image is an annotated screen capture from the video.

To adjust, slide the 0.018 feeler gauge between the rocker arm and the valve stem. Unscrew the lock nut and turn the adjuster with the screwdriver until there is a slight drag on the feeler gauge. Tighten the locknut while holding the screw driver and recheck the valve lash.

This was easy enough to do, as per the video. Once I was done I turned the engine over with the wrench to re-check them all a second time around to make sure.

This was more difficult due to the tight clearance (the heater box doesn't help) with the exhaust manifold in place, but definitely not impossible. I found that it was easier to hold the 1/2" wrench holding the flat spots of the tappet tight against the block. That way, I only needed a finger or two to hold that wrench in place while I did the adjustment with the other wrench. Once I was done I turned the engine over with the wrench to re-check them all a second time around to make sure. -- Pierre Desautels

After posting the videos on YouTube in 2012, Doug Hoffman made these comments on the CJ-3B Bulletin Board:

"Greg Gianas made the suggestion some time ago that someone should make a video on how to adjust valves and it stuck in my mind. Since I was rebuilding a Hurricane, I figured there was no better time to video the adjustment procedures than when it was on the engine stand all clean and pretty and before the exhaust manifold was in the way.

"I realize that many already know how to properly adjust the valves and have done it many more times than I have. Many thanks to Ken Bushdiecker (Oldtime) for his thorough explanation of the "opposing valve" method."

Oldtime had previously posted his procedure on the Bulletin Board: "Rather than explain how the camshaft eliptics work in relation to the tappets, I'll just detail the exact procedure:

Adjust all tappets with the engine cold.

Use flat bladed feeler gauge and adjust for a snug feeler blade fit (not loose and not overly tight.)

From the front of the engine rotate the crankshaft clockwise till you see:

You can see when any tappet is fully up because it will soon go back down.If you rotate the crankshaft too far simply turn it back to find the tappets highest position. The Precision Valve Adjusting method was initiated after I read the Universal Service Manual's vague instructions."

Doug: "Ken's method of opposing valve made absolute sense to me (once I had the camshaft in my hands looking at it) and it is the method I chose to use. 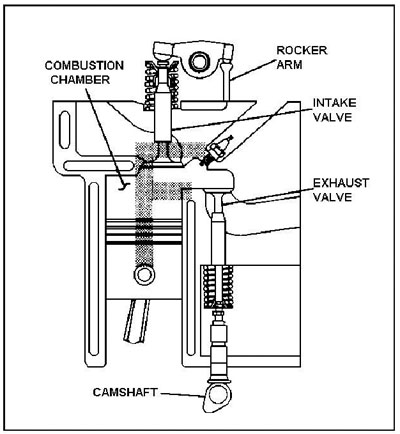 Sam Michael Jr. added: "Here are my thoughts. We always use the 'IC-EO' method. When the Intake valve is beginning to Close (IC) you adjust the Exhaust valve for that particular cylinder. When the Exhaust valve is beginning to Open (EO) you adjust the Intake valve for that particular cylinder.

"We also use the 'GO/NO GO' method with the feeler gauges using two feeler blades - each .001 larger and smaller than the desired Hot or Cold clearance. Example: for a .018 clearance you would choose a .017 and .019 feeler blades -- for the .016 clearance, you would use a .015 and .017 feeler blades. The valve clearance when Hot will be smaller than when Cold due to the expansion of all the working metal parts.

"You can run the valves from end to end without worrying about counting cylinders/opposing cylinders/etc. This doesn't have to be difficult and it's certainly not rocket science. This method will work on any engine out there."

Thanks to Pierre for assembling this guide based on Doug's videos and Oldtime's procedure. -- Derek Redmond