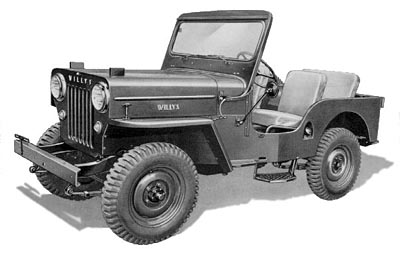 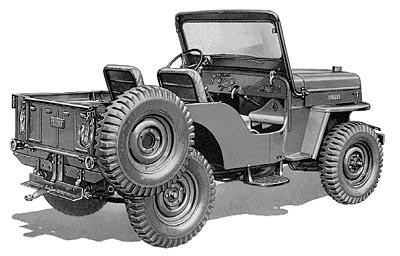 The Willys Motors Parts List, Model CJ-3B (1956) may not be the best place to start if you're wondering about the correct side steps for your Jeep. Bart McNeil noticed: "An interesting image is the front/driver's side drawing (on page 5 of the '56 Parts List) showing a different step than the rear/passenger side view on page 6. The driver's side image shows a step with the edge angled rather than the curved step we are familiar with. Also, the center brace is missing on this illustration, but that is probably just an artistic omission."

Ken Bushdiecker commented: "One must realize that the pic in this book is an artist's drafting and not an actual photo. So the strange 'squared-off' step seen pictured may only be a undeveloped concept."

H. Wooldridge asked: "I'm a fair fabricator and was wondering if there is a set of plans and/or description for the fixed steps that bolt to the floorboard? Figured I can make a serviceable pair instead of trying to find some."

Note: Sean Collins has created a set of drawings and illustrations of all the step pieces, as part of The CJ-2A Parts Project on the CJ-2A Page Forum.

Rus Curtis commented: "I've thought of using the current aftermarket steps and altering the rear hanger to match what the originals had. But, I wouldn't be surprised if the hangers on those steps didn't match or line up with the mounts. There are some steps out there in very good shape and obviously, that would be better. Of course if you were able to make these, you'd probably have to quit your day job just to have time to fill all those orders!"

Bart said: "The original steps are surprisingly light and appear simple. I would suspect you are right. They could be duplicated by someone with some sheet metal skills. When I examined the steps, I thought that the only difficult part might be the stamping of the diamond shape surface pattern accurately (though I suspect if you know what you're doing, it is simple)." 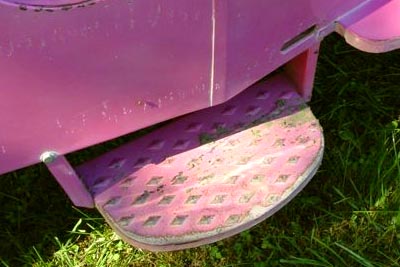 "I have a fairly clear photo of the step pattern. It shows the diamond shape of the raised portions to be roughly 1 inch in length and 3/8 inch in width. It seems to me that if you ground a cold chisel (or piece of steel) to that shape or slightly smaller, you should be able to use it as a die and approximate the raised pattern by hammering it against the underside of the sheet metal step. Using a soft wood 'anvil' under the step, you might get enough resistance to get a fairly good looking diamond. It would certainly take some experimentation, but the layman might get a reasonable duplication of the original diamond shape without sophisticated equipment."

H. Wooldridge: "I was planning the following. Cut the pattern out of 16-gauge mild steel with enough extra material to make the front lip. Cut a 1-inch or so thick plate on the correct outside radius so the steel can be clamped between the die and a metal work table. Heat the leading sheet metal edge with a torch and then roll the edge up and over the die (like a pan brake). You now have the basic step form. Take another piece of plate and clamp into a vertical mill, then crosscut to leave raised diamonds. Place the sheet metal form into a bearing press with the die on top of a lead or urethane sheet and press the diamonds into place. You should now have a completed step. Weld in some 3/8-inch round CRS to give support and provide the pivot. The supports to the body can also be formed over a die -- I was going to use flat iron or box tubing.

"For the purposes of utility, it might be better to punch holes in the sheet metal, similar to the way an M37 running board is made. The punch is driven through from the bottom and leaves a raised burr on the top of the step, which gives a good, nonslip surface. Diamond tread is slippery when wet, so the original design probably leaves something to be desired with regard to function. To fab this, you could take a handheld air body hammer with a pointed bit and make these holes very consistently using a backup block."

Bruce inquired: "Do your original steps have side mounting legs spot welded to base, or do they bolt on, as the reproductions do? Is one leg longer than the other? Is there supposed to be 2 or 3 studs hanging down thru the 3 holes in channel on underside of base? What years or models used the narrowed side legs? I just recieved a NOS set and the side legs are spot welded on to base, one leg is also longer than the other. Outside hole in channel does not have a stud hanging down thru, nor does it look like there ever was one installed? I haven't tried to hold up to Jeep, but repos didn't have a difference in leg length." 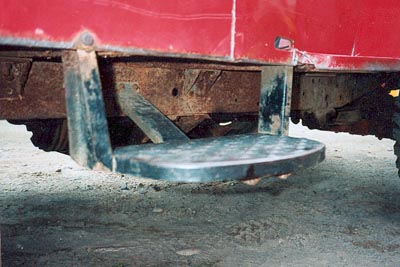 Rus Curtis said: "I've seen three sets up close. One on a 2A, one on a 3B and one set sent to me that is mostly rust -- off what I don't know. All were spot welded on the leg to base attachment. On two of the three under the base there were three possible bolts or studs. I think bolts because the 'head' is smooth vs. a threaded stud extending beyond the nut. That's a guess. But there were three. The narrowed or tapered legs as best I can tell were on only the flat fenders. The rear leg had one stud mounted down through the tub floor and the other bolt was sideways through the bottom of the body panel. This leg is just behind the floor channel. Actually the floor hat channel has a 'notch' cut out of it to accomodate the stud that sticks through the floor."

The photo shows the tapered rear support on the right side of a '59 CJ-3B. See also the left side step (70K JPEG). 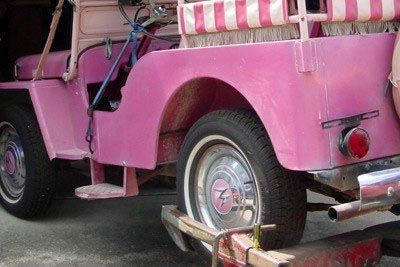 Maxx stated: "The way to tell the difference between original 2A/3A steps vs. original CJ-5 steps is the rear bracket tapers at the top. Reason is the body narrows down on the earlier Jeeps, just forward of the lower sill." 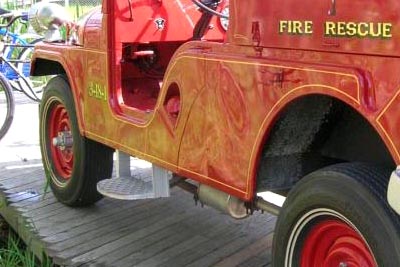 Maxx: "CJ-5 steps have the same bracket front and rear. The tub doesn't narrow down forward of the sill. Straight shot cowl to rear."

The 1960 Fire Island CJ-6 also shows the straight tub of the next generation of Jeeps, and the resulting identical front and rear legs. 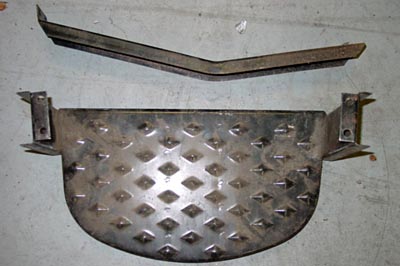 Photo by Jonathan George for his article on installing steps, on The CJ-3A Page, shows an original CJ-5-style step with brackets.

See also the bottom view (60K JPEG).
Ken: "Some steps will fit both CJ-5 models and CJ-2A, CJ-3A, and CJ-3B models. The early CJ steps had only one mounting hole on the rear hanger of the step, whereas these steps were modified by Willys utilizing two bolt holes per hanger. For CJ-5 models you utilize the center set of holes in the support bracket, for all other models you use the offset holes according to the side you are mounting the step. In other words, these steps fit either side of the Jeep and the support brackets adjust to either right hand or left hand mount." 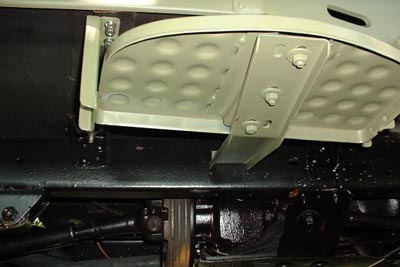 Rus Curtis commented on the side steps that many vendors carry: "You will note that all say they fit 2A-3B plus CJ5-6 and M38A1. However, the legs are set up for the CJ-5-style floor, not any of the flat fenders. Look closely at the rear leg, it is the same as the front, length and setup, and we should all know the correct rear leg is tapered and one of the bolts mounts horizontally through the side of the body panel. Additionally, the diamond pattern is more like a bubble or blister."

Maxx again: "On repops, the manufacturer cant quite figure out how to replicate the diamond pattern on the original foot plate. Even when they are crusted with mud and dirt, you can spot the reproduction ones from 20 ft. away. Close but no cigar. However, with the repops the brace that runs from the bottom of the foot tread to the frame is fairly accurate."

Thanks to all the contributors and to Doug Hoffman and Ken Bushdiecker for their help. -- Derek Redmond

Also on CJ3B.info, see Sometimes Jeep Myths Aren't So Mythic: The Case of the Jeep Steps.