Although most U.S. military Jeeps were built with rear-mounted spare tires to maximize side clearance, the only early civilian Jeep to come standard from the factory with a rear-mounted spare was the DJ-3A, known as the Dispatcher or the Surrey Gala.

Other civilian Jeeps including the CJ-3B had a right-side-mounted spare as original equipment, on a bracket supported by four bolts and some bracing inside the rear fender. Some owners have moved the spare to the rear (see Building a "Factory" Tailgate Spare Tire Mount on CJ3B.info.) 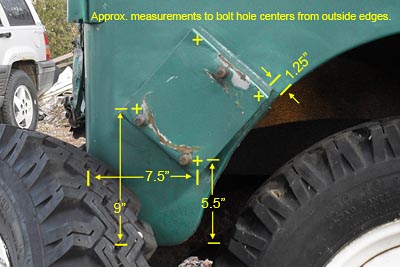 Unfortunately we don't have factory drawings showing the attachment of the bracket to the body, but here are the measurements I took from my slightly battered example. 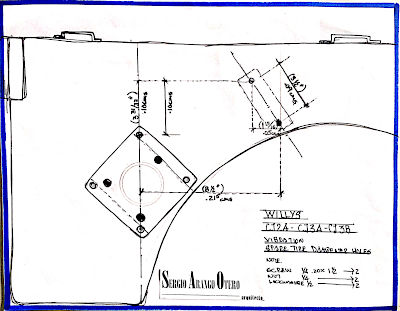 Sergio Arango did this drawing which shows the spare tire mount in relation to the position of the wooden vibration dampener block. 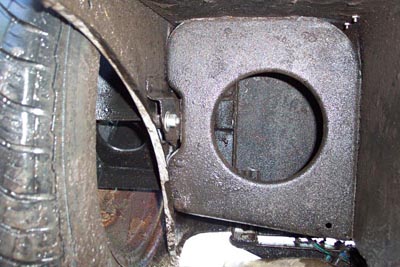 Don Norris took this photo and says: "When I installed my spare wheel hat channel and spare wheel brace, I first marked and drilled the holes to mount the spare wheel holder. I used the measurements from CJ3B.info (above).

"Next I held the spare wheel brace in place and drilled those two vertical holes into the edge lip on the brace. Same thing next, bolt, weld, paint." 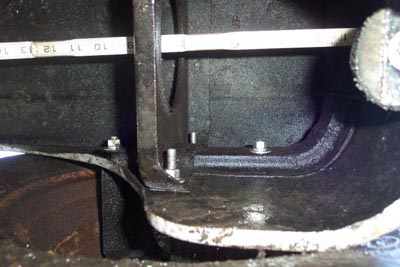 "From the tail light panel to the lip of the big circle is 7-5/8 inches (seen from below in this photo.)

"From the top of the fender well to the top of the high part of the hat channel is 4-1/2 inches." See also Don's photo showing this internal measurement from the front (80K JPEG).


Thanks to Don and to Bob in NC for the photos. -- Derek Redmond