Jyotin's "3BCJ Hot Wire Box" is a remote ignition switch that allows you to separately turn on power to the 12-volt ignition system, and to the starter motor.

The "3BCJ Hot Wire Box" as shown is made of a 4x4 metal electrical conduit box with one on/off toggle switch and one momentary contact push switch. I put an in-line fuse in the circuit because I never like to connect un-fused wires to the battery positive terminal -- just in case. 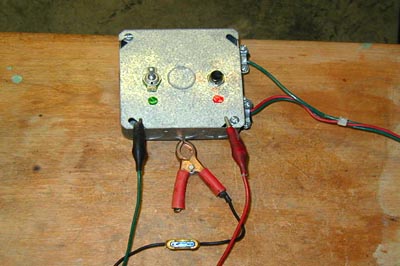 The first picture shows the front of the box. I painted a red dot and a green dot to remind me which wire each switch controls. The center large clamp is the one that connects to the battery. Note the in-line fuse is the blue-ish thing in the center. 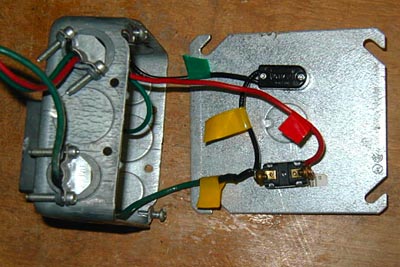 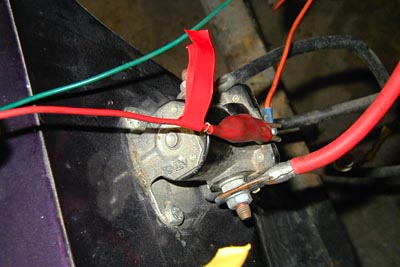 By connecting the red momentary contact push button wire to the starter solenoid actuator terminal, and the green toggle switch wire to the coil + terminal, you will effectively make a remote ignition switch.

Be sure the Jeep is in neutral before connecting the switch! 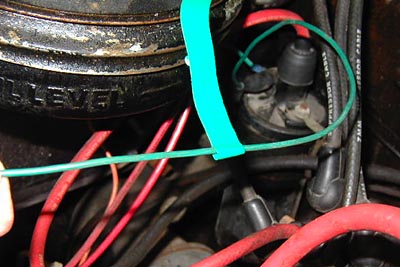 To turn the engine over without starting it, simply leave the toggle switch off and press the push button for the starter.

Remember: when you press the push button the starter motor will turn and the Jeep will start moving if it is in gear! Also, if the green toggle switch is on, the engine may start and drive away without you! You can turn the Jeep off again by turning the toggle switch off.

Be sure the Jeep is in neutral before connecting!

The electrics are pretty simple -- in order to generate a high voltage that goes to the spark plugs you need to create an electrical field, and then interrupt it.

That is what the points / condenser / coil does. 12 volts into the coil when the points are closed creates an electrical field in the coil. The coil basically 'steps up' the 12 volts to the thousands of volts needed to create a spark. This happens when the points close and when they open. It is the change of state that creates the spark. In a point distributor the spike that is harnessed is when the points open. At that time, the field collapses, creating a spike in the coil and a corresponding high voltage spike in the output of the coil, that goes to the center of the distributor cap.

The condenser is sort of a 'cushion' that smoothes out the spike a little to keep the points from being chewed up. I have seen an F-head run with a bad condenser, but it doesn't run very long -- perhaps a few miles or so before the points get so burnt that they no longer make contact.

So if you turn the engine 'til the points are closed, turn on the green ignition switch, and hold the business end of the coil wire near ground, you should generate a spike if you push the points open with some insulator -- I use a chopstick, 'cause it gives me an excuse to eat some Sweet and Sour Pork.

At that point you have divided the problem in half. If you get a spark out of the coil, then your problem is between the coil output and the sparking plugs, which limits it to the cap, rotor, or some esoteric problem in that area.

If you don't get a spark at the business end of the coil wire, then your problem is in the low voltage portion. The most common problem is that you have the points shorted to ground. When the points open, only one side of the points should be grounded, the other side should not have any continuity to ground. It is very easy to short the points to ground. If in doubt, simply remove the points and re-install them paying close attention to what is touching what. 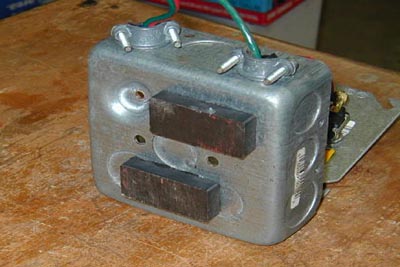 The box need not be metal; you could use a plastic electrical box just as well. I glued a couple of magnets on the back so that I can attach it to the fender. The magnets can tend to scratch the paint, so if you have an expensive paint job you may want to encase the magnets in plastic or something that won't mar your finish.

The box has many uses in testing lights or other circuits on the vehicle. You can use it to test or control any low-voltage DC circuits in your garden tractor, Jeep, or what-have-you.

The only fail-safe built into this box is the fuse, so remember: before connecting the "3BCJ Box" ensure the Jeep is in neutral.

Thanks to Jyotin for describing the box.-- Derek Redmond