Correct Fasteners for the CJ-3B 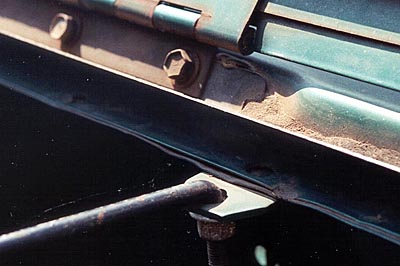 Buck Toenges was looking for a list of hardware for assembling his CJ-3B. He asked on the Bulletin Board: "Does anybody have a list made up of the body and frame bolts for a '53 CJ-3B? I found the bolt dimensions for the body mounts, but would like to know about the other bolts that bolt together everything else such as fenders, hood and tail gate bolts."

Ed Wilson responded: "All the bolts you mentioned above are standard sizes in NC (National Coarse) thread if you are using the original captured nuts. The length is available in 1/4-inch steps off of the shelf. I don't have a list, but the hood hinge bolts (right) are 1/4" (7/16" head), fender to grill and fender to body are 5/16" (1/2" head) and the tailgate hinge bolts are 3/8" (9/16" head) if that's what you mean.

"I am in the middle of a frame-off rebuild with a reproduction body and I am using all SS bolts. My local ACE Hardware has a good selection of SS bolts and screws."

Rus Curtis commented: "I also wondered how others were able to easily identify parts for their projects and also able to rattle off stock numbers for each of the parts making up a jeep. Finally, I tricked one of these experts into revealing that he used a Parts List. I ordered one from one of the vendors and even though it was a reprint, it was easy to read. It has become indispensable when replacing broken, rusted-through or missing hardware with correct sizes.

"Case-in-point: in the middle of the rear deck, the tub is held to the frame with what the parts list calls 'step bolts,' as opposed to hex bolts elsewhere on the tub, and gives the dimensions 5/16" - 18 X 1 1/2". A few years back, I remember others talking about these bolts, but they were confusing them with elevator bolts. Using the parts list, I was able to go to a hardware warehouse and buy the correct large curved headed bolts.

"So the answer is yes, someone has taken the time to compile a list of all the hardware, but regurgitating the entire parts list would be time consuming. Trust me on this one, it's worth the $ to buy one! An added benefit is when talking to one of the diehard vendors, they use the original stock numbers and it makes it easy to order parts!" 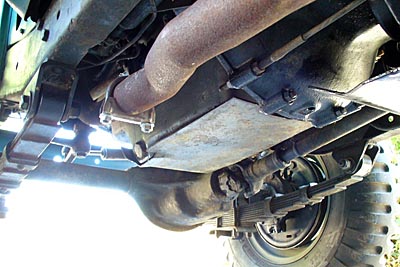 Ed Wilson: "As Rus points out, there are specialty bolt applications on the 3B, especially the many fine thread bolts for hard parts. Some of these are very difficult to locate in stainless, which I took to be what Buck is asking about.

"In building a good, solid Jeep, the hardware store SS bolts work very well, but if you want a 100 point restoration, then SS is out anyway.

"I found during my project that most of the special fasteners were not very rusted, but in the areas that Buck mentioned, they were. So, I have used the originals except in the sheet metal areas. They looked pretty good after the first 50 years."

Bob said: "I used all stainless fasteners when I put my '53 back together. I found good quality stainless at a local industrial supply, not much more than going to Lowe's or other places, but much better quality. Two notes I have for those interested in doing this: 1) the bolts that hold the fender supports are fine thread and are not easy to come by. 4 of them are required. 2) Herm Tilford (Herm The Overdrive Guy) makes stainless bolts for the windshield pivot which I plan on putting on my Jeep sometime this winter perhaps."

Jake had a different option. "Here in NW PA, there is a town called Meadville. It is the tool and die capital of the world (they say). They have a shop called 'The Nut and Bolt Place.' I walk in and hand them a handful of rusty, cannot-find-anywhere nuts and bolts. A few minutes later, the guy comes back with all new. I found this after searching for a few years all over. The local machine shops or tool/die shops can help you find many parts. Make friends with them as I did and they make things much better for you."

Thanks to Steve Childers and Rus Curtis for the photos, and to Tech Editor Doug Hoffman and all the contributors. -- Derek Redmond