by Ken Bushdiecker
I have taken it upon myself to correct the Universal Jeep Manuals. As you may see this is potentially a very complex issue, and if anyone decides to heed my amendment recommendation then please read my comments slowly and attentively. Affected are all post-1954 Universal and Dispatcher model Jeeps, and likely all other post-1954 Jeeps powered with the 134 cubic-inch Willys engines and having their correct distributors.

This update concerns the oil pump-driven gear mesh to the camshaft driving gear. This update does not affect any 134 engine Jeeps originally equipped or modified having Autolite IAD 4008 or earlier model distributors (pre 1955 distributors) regardless of your vehicle's actual year.

This update specifically affects Jeeps with the following model distributors and likely includes others such as those found on 134 engines equipped with the IAT 4405 vacuum-advance distributor or possibly Delco Remy distributors. (I have not referenced those exact distributors nor other distributors for non-Universal model Jeeps). This certainly affects all Universal series Jeeps with post-1954 Autolite distributors having the two-slotted advance arm (90K JPEG) W/O #118415 (part no. 5 in the illustration at left.)

In the various Universal manuals we find three separate sections containing information relative to oil pump/distributor indexing. Beginning in the 1953 Universal and Farm Mechanics Manual and on through the 1960 Service Manual 1002-R3 in the "Tune Up" section under the heading of "Trouble Shooting... Mechanical Factors Affecting Distributor Timing:"

"Difficulty in obtaining correct timing or irregularity of spark advance characteristics can be caused by the following mechanical factors affecting the distributor. A) Oil pump may be installed incorrectly. The relationship of the oil pump driven gear to the drive gear on the camshaft is critical because it determines the relationship between distributor rotor position and piston position. If gears are meshed one tooth away from the correct position the distributor will advance or retard 36 degrees. With #1 piston at top dead center, the distributor rotor should point down ward and fore ward about 5 o'clock. If it does not, remove and correctly install the oil pump as instructed in the proper engine section." 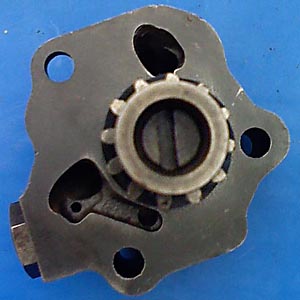 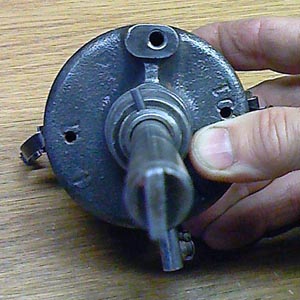 I claim that since these oil pumps are always meshed to the camshaft by means of a 12-tooth driven gear (far left), indexing just 1 tooth off correct positioning will yield a 30-degree change (not 36 degrees as is stated) or the equivalent of 1 hour on a clock face.

I claim that this above information is correct, but only for pre-1955 Jeeps, and the reference to the spiral gear as a "(worm)" is surely debatable. In the "Electrical" section of all 1955 and later Universal Mechanics Manuals including all Universal Service Manuals through the 1968 SM 1037 we find a special note concerning the indexing:

I claim that here W/O is telling you to re-mesh the oil pump gear off from the previously described 11 o'clock position. Which is correct advice not just for the IAD 4041 but for all post 1954 Autolite 134 engine distributors. 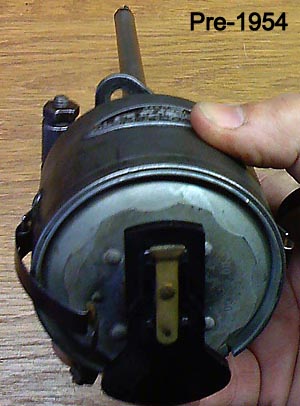 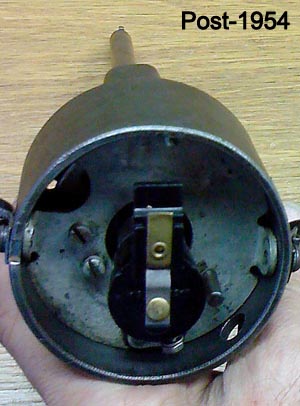 The IAD 4041 and the later Autolite distributors are NOT identical in design to the preceding distributors in crucial ways. The tongue of the earlier distributors (left) was machined at an angle to the rotor position. All later distributor shaft tongues (right) are machined parallel to the rotors position. Most importantly; distributors with the new style of advance arm # 118415 can only be effectively indexed at cardinal compass points due to the advance arm limits. This means 12, 3, 6 or 9 o'clock positions. The advance arm (90K JPEG) only allows for 30 degrees of adjustment in either direction from center (or 1 hour on a clock face.) If one attempts 1,2.4,5,7,8,10, or 11 o'clock positions for # 1 piston TDC, then the advance arm is always at or very near its adjustment limit. Therefore IAD 4041 and all later distributors utilizing this same advance arm must have the oil pumps meshed differently than the old system used with all previous Autolites. This requires the oil pump to be meshed so that the offset slot as seen through the distributor gallery must now be positioned in the 12 o'clock position (not 11 o'clock as is described in all service manuals.)

Correctly done, this will place the # 1 TDC rotor into a 6 o'clock position.

Here then if I may, I will amend information found in 1954 and later Universal Manuals for post-1954 Jeeps. With the crankshaft rotated to #1 cylinder at TDC, the oil pump should be installed so the distributor shaft engagement slot is vertical (12 o'clock) with the wider side of the pump shaft toward the front of the engine (slot toward the rear.) This provides the distributor base 30 degrees of rotation for correct positioning to allow proper index and adjustment. 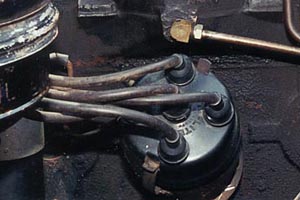 In effect we are advancing the distributor 30 degrees so that the correct position for the #1 spark cable terminal is now in the 6 o'clock not the 5 o'clock position as was previously correct. Again this is telling you that if you have any post-1954 Jeep Universal you need to mesh the oil pump gear 1 tooth counterclockwise from what is described in your Universal Manual to re-index the rotor to a 6 o'clock position. See Lawrence Wade's original unmodified 1955 IAD 4041 distributor (left) and note the 6 o'clock position of what he confirms is the #1 spark plug cable. Actually the rotor reads ever so slightly after 6 o'clock to allow for spark advance. 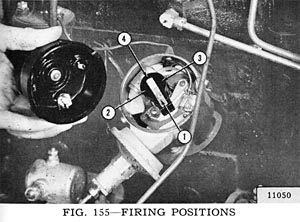 WARNING: The figures and pictures pertaining to distributor rotor indexing as shown in Universal Manuals are seldom correct for post-1954 Universals! The figure captioned "FIRING POSITIONS" shown in the 1963 Universal Service Manual SM-1002-R4, the 1965 SM-1002-R5, and the 1968 SM-1037 is figure #11050 (left). This Autolite IAT vacuum advance distributor was never used on Universal Jeeps!

Finally I will CAUTION! If any distributor is fully disassembled, care must be taken to properly install the cam and stop plate to the distributor drive shaft. It is readily possible to assemble having the rotor index misaligned 180 degrees. -- Ken Bushdiecker

Scott Blystone commented on the Bulletin Board: "Nice writeup -- your info is correct from my personal experience. I would add however that even if you do not perform the one tooth offset on installation, there is just enough adjustment to set timing correctly (but only if everything else is mostly up to correct specs). Someone put the wrong distributor in my F-head during a prior rebuild and I could never get the timing where I wanted it -- never had that top end power it should have. As I fixed other problems (valve lap, new points, plugs and wires, etc.) I was able to get the timing right -- but my distributor is turned all the way to the stop in order to do so. I suspect there may quite a few Jeeps suffering problems like this. I know I have seen a lot of vacuum advances on flat fender Jeeps over the years. I am sure they were replaced because people thought they would work better."

Thanks to Ken for his research, and Jamie Powers and Rus Curtis for photos. -- Derek Redmond