Win a Willys Jeep from Kellogg's 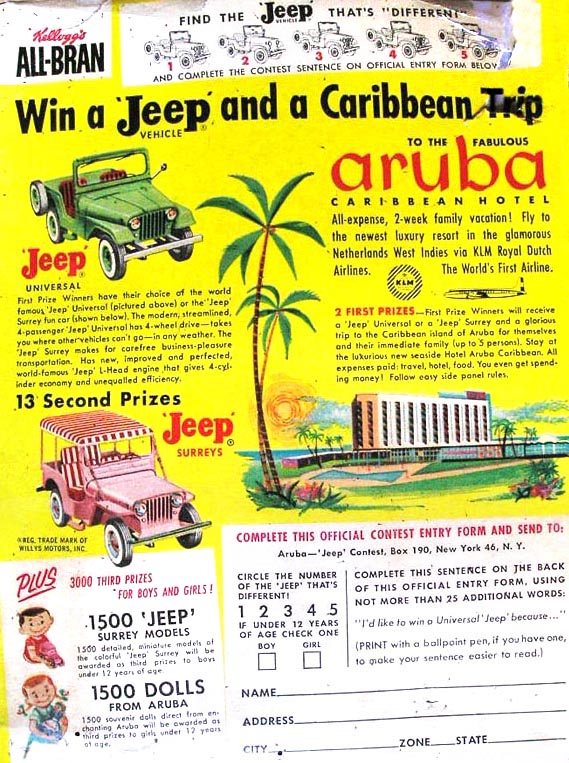 Emil Bruce found this (empty) box of Kellogg's All-Bran cereal from 1960, advertising a contest in which the winner would receive their choice of a Jeep Universal CJ-5 or a Surrey DJ-3A, plus a family vacation in Aruba. Thirteen second prizes consisted of a Jeep Surrey. Kids could also win Surrey toys or souvenir dolls.

All-Bran is a wheat bran cereal, still available in 2010 in several different varieties. More recent contests sponsored by Kellogg's around All-Bran tend to ask for recipes which include the cereal, and have prizes like kitchen makeovers. But apparently Willys Motors thought in 1960 that the breakfast table was a worthwhile place to promote Jeeps. (See also Win a Willys Jeep from Post Cereals on CJ3B.info.) Although this contest was clearly inspired by the Surrey, they took the opportunity to plug the CJ-5 as well.

To enter the All-Bran contest, you had to determine which of five Jeep drawings was different. (Jeep #2 has no grille, which would probably lead to overheating.) You also had to complete the sentence, "I'd like to win a Universal 'Jeep' because..." and submit your entry by 30 November 1960. (You are now 50 years too late.)

The front of the box (140K JPEG) features mainly the health benefits of All-Bran, with just a small mention of the contest.

Thanks to Emil Bruce for the photo. -- Derek Redmond