Charles Tate is currently doing a full restoration of a 1956 DJ-3A Dispatcher convertible. We are hoping to archive a lot of his research in this new Dispatcher Details section of CJ3B.info. -- Derek Redmond


There were three different kinds of speedometers used in DJ-3A Jeeps. Two of the three also appeared in the CJ-3B and CJ-5/6.

When the CJ-5 was launched in the 1955 model year, and the DJ-3A in 1956, they had a new instrument cluster in the dashboard, made by King-Seeley Corp. of Ann Arbor, Michigan. (King-Seeley manufactured a huge variety of metal products, including Craftsman table saws and Thermos lunch bottles.) In the 1957 model year the CJ-3B was also standardized on this new cluster, losing the smaller speedometer which had been in all the flatfenders up to that point (and also made by King-Seeley.) 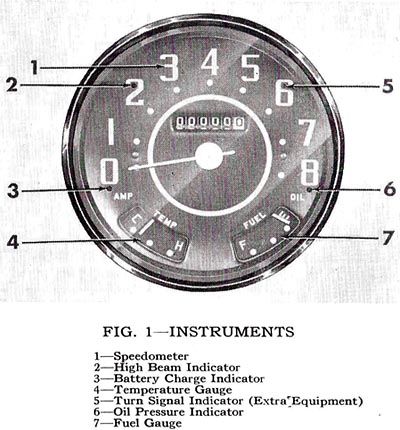 If you're looking for a correct speedometer for an early DJ before serial number 56337 12571 then you'll need the one made by King-Seeley (KS). It's for 6 volts only, and has its own little voltage regulator on the back. The assembly is Willys part number 911649. 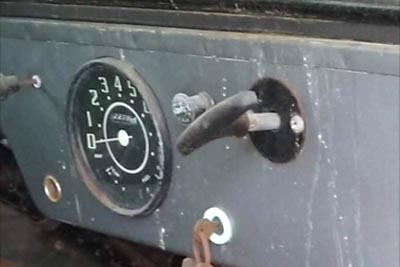 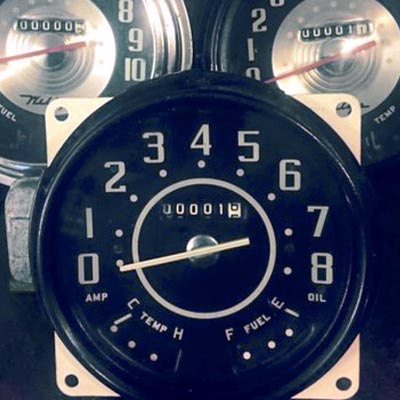 This example of the KS "80" instrument cluster belongs to me. I have fully restored it and reset the odometer. In the background are examples of the more decorative 0-100 KS speedometers (see below for more details on these). 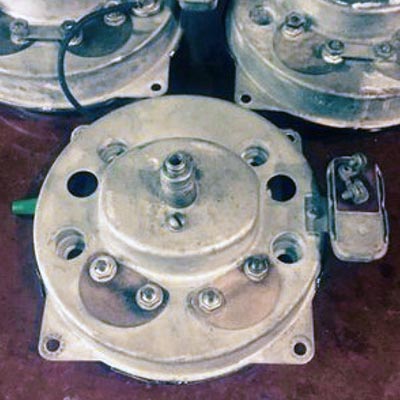 A view from the back of the KS "80" unit shows the connection for the speedometer cable, terminals for the electric senders for the gauges, and external voltage regulator. 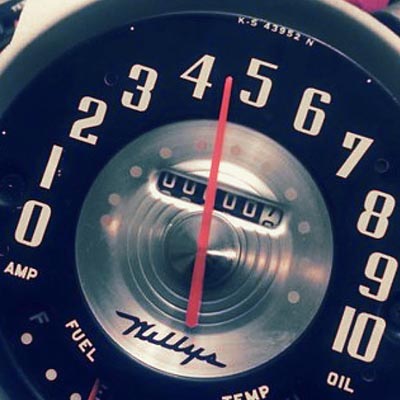 Well, that's straight up 100 MPH. A comparison test with different kinds of speedometers I had worked on showed all holding the exact same speed with a drill at a set RPM and a small piece of speedometer cable. Willys speedometers calibrated in Kilometers Per Hour read up to 140. 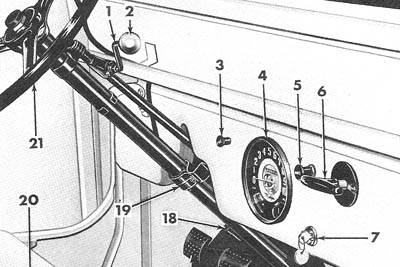 The speedometer was also reportedly used in the 1955 CJ-5. 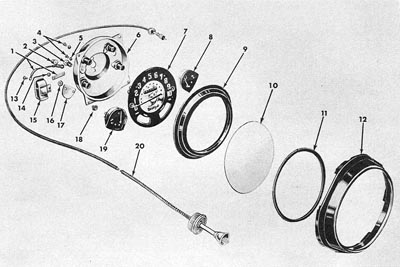 The 0-100 unit shows up again in the same 1956 DJ-3A Parts List, in an exploded view including the convex glass and two-piece bezel holding it. The individual parts including the external voltage regulator are identified in the larger copy (220K JPEG) of the illustration.

The part number for the instrument cluster assembly is, however, still listed as 911618. 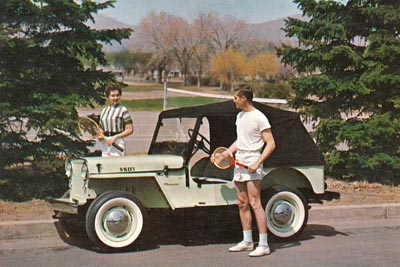 The Dispatcher, or at least the convertible version, was maybe a logical place to use up some 0-100 speedometers left over from the discontinued Aero passenger cars. The DJ convertible with its fastback top was the only thing in the Willys lineup since the 1948-49 Jeepster, that might be considered to look "speedy." This picture is from an advertising postcard circa 1957. 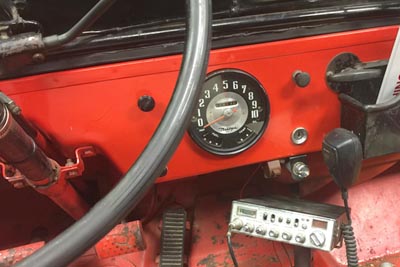 But I have been able to find only one 1956 DJ-3A with a surviving factory 6-volt 100 MPH King-Seeley speedometer. It's a really nice early convertible, serial no. 56337 10366, that belongs to Dave Eilers at eWillys, and which he has named "Patterson." While I can't absolutely prove it, it is my opinion that Patterson's 100mph cluster is original. I now suspect there may have been more, and together with the pictures in the Parts List it is enough proof for me that the Aero instruments were used in some early Dispatchers. 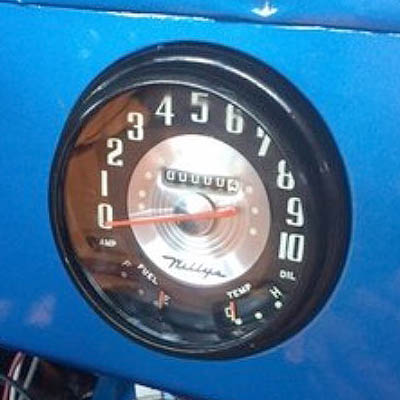 I managed to find a couple of these, and I'm putting one in my 1956 DJ-3A Dispatcher convertible, because I really like the quality and look of it.

This is what it's looking like, complete with the convex glass, in my restoration of serial number 56337-11325, which is still underway. But I can positively assure you I won't be ever going that fast! And I'll keep a KS 80 and a KS 100 with a plain glass and bevel close at hand, in case I ever change my mind.

After more than a decade of using King-Seeley products, Willys made a switch in 1956 to an improved instrument cluster with the same dimensions, manufactured by Stewart-Warner Corp. of Chicago, who also made items such as radios, refrigerators, the patented "zerk" grease fitting, and scoreboards for stadiums including Fenway Park in Boston. 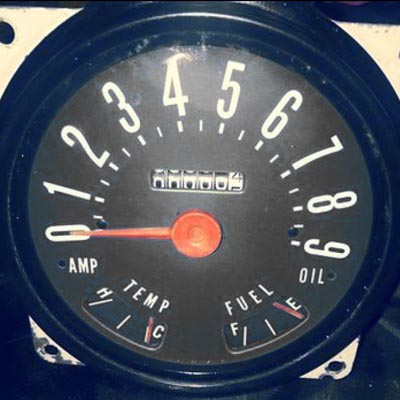 Steve K: "Interesting that the temperature gauges read from opposite directions."

Information from other sites indicates the gauges will not interchange from KS to SW and vice versa. I'm thinking probably due to patent issues and rivalry between the two companies. 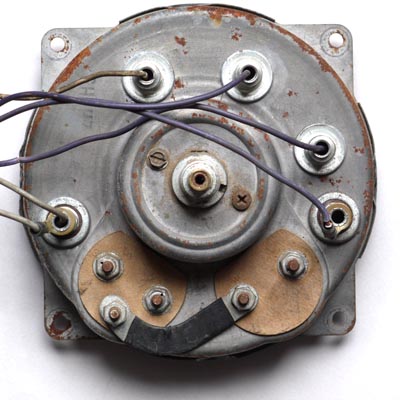 Bob W: "Both speedometer assemblies have a voltage regulator for the instruments. The KS one is external and the SW one is built into the fuel gauge. That's why the internal regulator gauge has 3 terminals with the jumper over to the other gauge."

Thanks for coming to my rescue Bob, because that question had been bugging me for quite a while now. The jumper can be seen on the back of this SW unit. 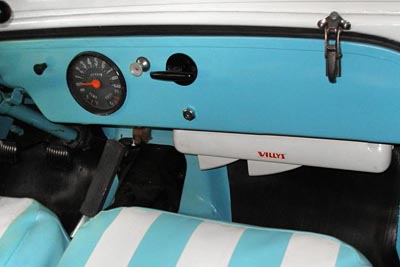 The Stewart-Warner unit is seen here in the very plain dashboard of a 1964 DJ-3A Surrey. This Cerulean Blue Surrey (with heater!) was restored by the late Bruce Agan. 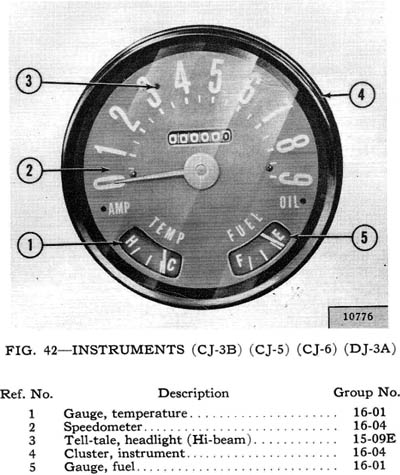 This illustration is from the 1962 Jeep Universal Parts List (100K JPEG).

For more details on parts and applications for KS and SW instruments according to model and serial number, see these pages of the Parts List:

This picture of the SW had also appeared in the 1961 Dispatcher Owner's Manual (100K JPEG), but interestingly the King-Seeley 0-100 unit had not yet been replaced in the illustration of the dashboard, on page 11 (330K JPEG) of the 1961 edition. 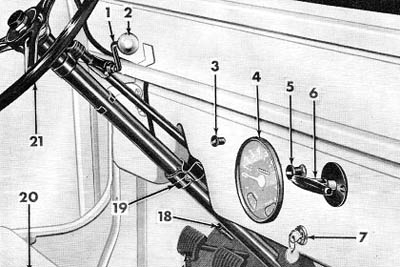 However, when the DJ-3A dashboard illustration was used again on page 169 (140K JPEG) of the 1962 Jeep Universal Parts List, a Willys retoucher had pasted in the new instrument cluster!


F Bill: "Uh oh... I just realized these use an electric temperature sender if I am looking at them right. One thing I do not have on any of my engines. Are they available?"

Yes, both my King-Seeley 80 MPH and my later Stewart-Warner 90 MPH speedometers have electric temp gauges. On my original motor, even though the speedometer was MIA, the electric sending unit is still on the side of the head. I've got an extra DJ L- head and a JEEP-marked L-head, and both have the same hole for the sending unit. I would think the sending units wouldn't be that hard to find in either 6 or 12 volt. -- Charles Tate 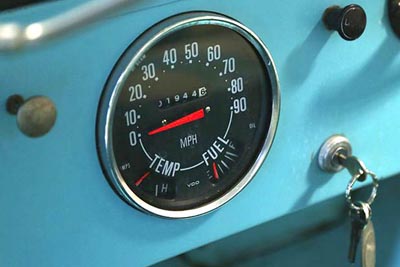 Many restored Jeeps have had new speedometers installed, often the one made by VDO as a replacement for the standard Jeep instrument cluster. It's most quickly identifiable by the numbers which run from 0 to 90 rather than 0 to 9. You can find a repro unit in an otherwise fairly accurate restoration such as this Surrey... 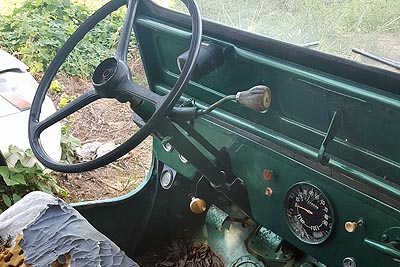 ...or with broken glass in an apparently quite original barn find such as this 1960 Surrey, which has had little attention other than a quick re-spray.


Thanks to Charles and the other contributors. -- Derek Redmond