Charles Tate is currently doing a full restoration of a 1956 DJ-3A Dispatcher convertible. We are archiving his research in this Dispatcher Details section of CJ3B.info.

Much of the information on this page also applies to the CJ-3B and other Universal Jeep models. See also Radiator Guard (Model CJ-3B) on CJ3B.info. -- Derek Redmond


Quite a few years ago I ordered some headlight bezels for my 1956 DJ-3A Dispatcher. I was pretty disappointed when they came in because they wouldn't fit! At that time I began looking and asking around and discovered that not all model year DJ-3A Dispatchers are the same.

The late Bruce Agan came to the rescue. Even though he was already sick at the time he put the following information together, and said, "Not sure if this helps or muddies the water." 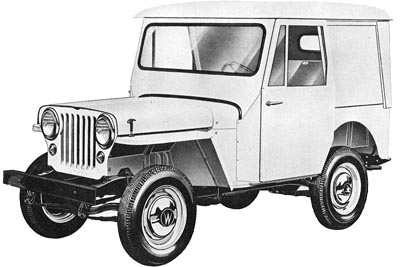 Well, to me that didn't muddy the waters at all. Here are some pictures to go along with some of those part numbers: 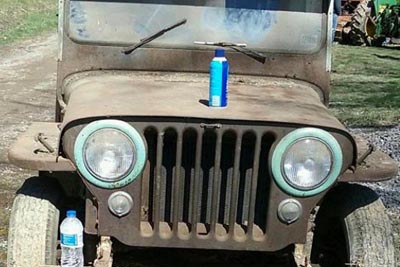 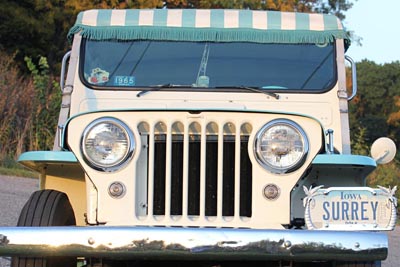 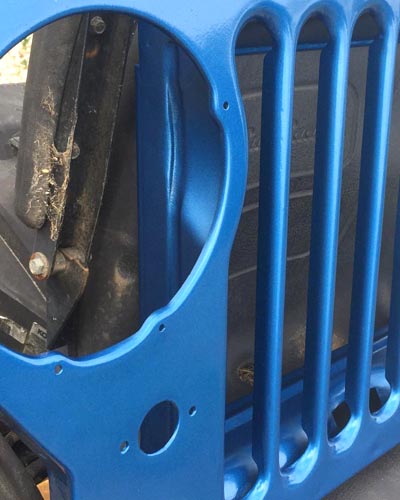 The early grille style is most easily recognized by the holes for the parking light screws being drilled horizontally. Separate, vertically stacked very small screws will hold the glass and the bezel onto the parking light housing.

The openings for the headlight housings are stamped with a slightly curved flange around the edges. 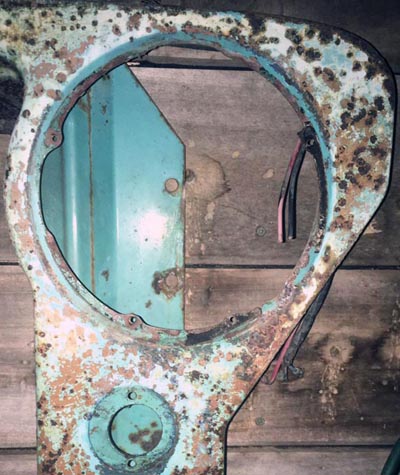 The later grille has the holes for the parking lights drilled vertically. The same screws that hold the bezel, glass, and housing, go all of the way through and have nuts holding it all tight.

The opening for the headlight bucket is punched straight through with no flange left behind (160K JPEG). 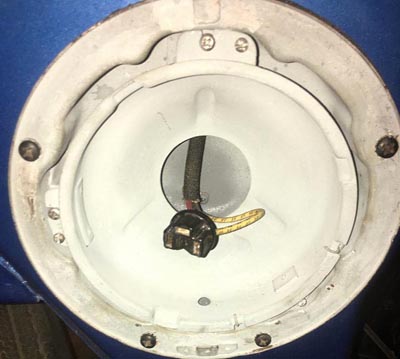 The early headlight bucket is made by Autolite and is seen here on a 1956 DJ-3A Dispatcher grille which has been cleaned up, painted, and rewired. 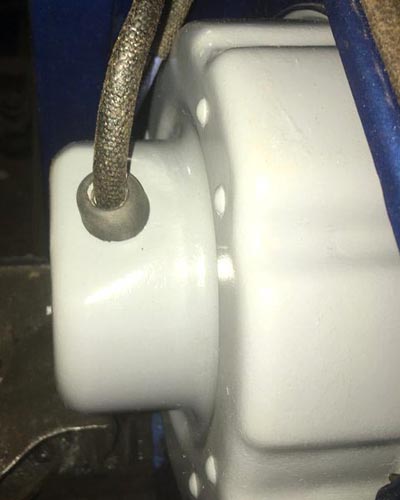 Notice the way the harness goes in through the grommet from the back of the housing. (That old grommet has new shrink wrap covering it.) 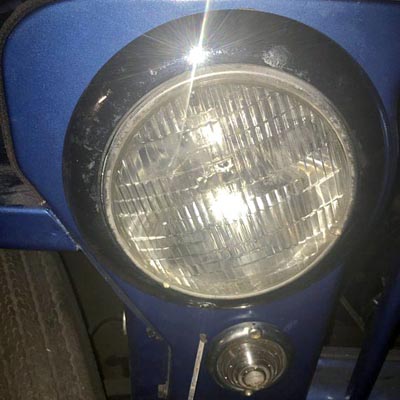 The early headlight trim ring is distinctly wider and not as deep as on the later models. It's made of stainless steel that was either polished or painted black. 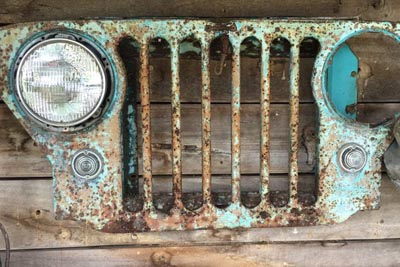 This later radiator guard is from a 1961 DJ-3A and is hanging on my porch. Recently when working on my 1956 Dispatcher I tore into it a little bit so that I could better search for details and differences. 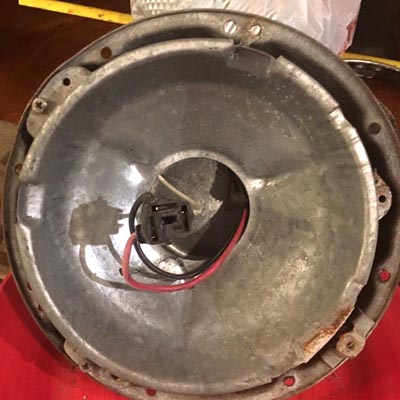 The later Hall headlight bucket has only one spring inside instead of the two used in the Autolite buckets. There are other subtle differences in parts and measurements. 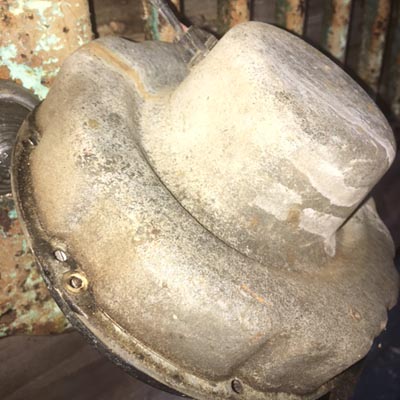 The wire grommet is different, with the wires molded into the rubber instead of just passing through, and the ground is bradded to the housing instead of being fastened with a screw and washer like the Autolite buckets. 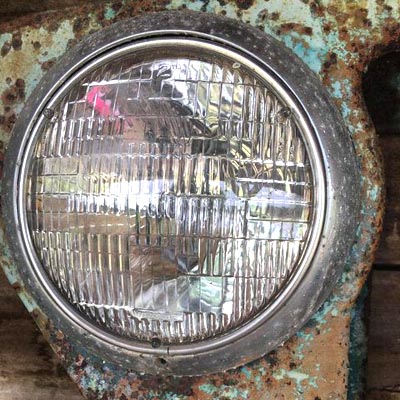 This is the headlight installed in the Hall housing, with the narrower trim ring or "door" covering the mounting screws. This style was installed after serial number 56337 15801, which would put the change somewhere in mid-1959.

An illustration in the 1962 Parts List shows all the pieces which make up the headlight assembly (40K JPEG).


Note: 7" diameter, 3-plug sealed beam headlights (90K JPEG) in either 6-volt or 12-volt will fit in either the early Autolite or the later Hall headlight buckets.

Here are some more comparisons of the Dispatcher headlight trim rings. 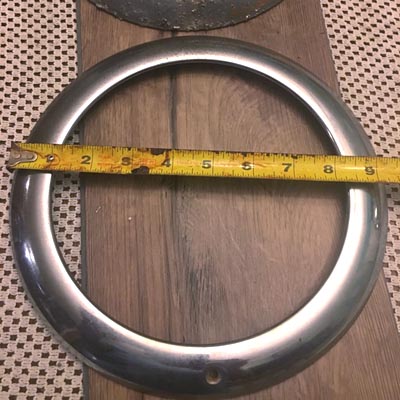 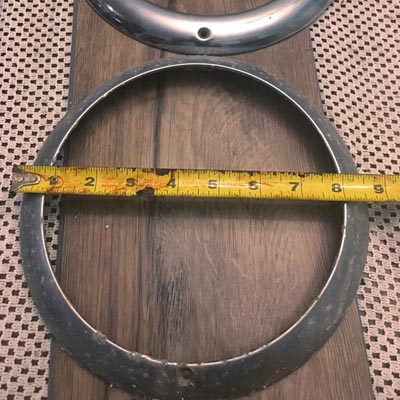 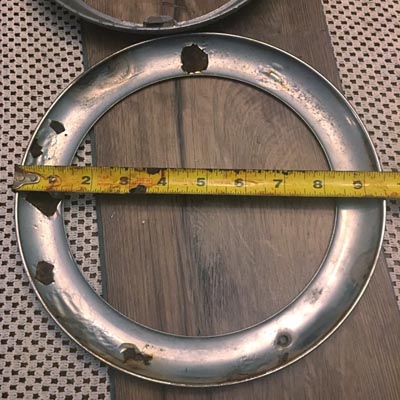 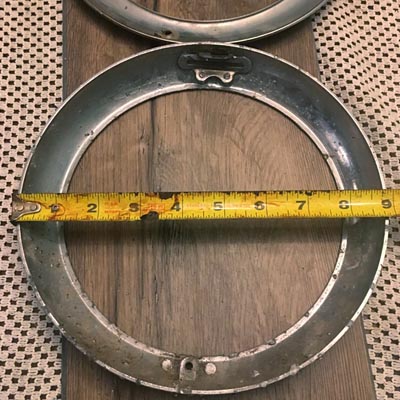 The early Autolite trim rings or "doors" on the left are chromed, but in 1956 I understand they could have also have been painted black.

On the right are the later Hall trim rings. They're actually chromed pot metal. As I found out early on, these will not interchange with the Autolite trim rings. You'll see why if you pay close attention to the measurements, the way they clip on, and the way the screws fit.

Our DJ-3A Dispatchers were equipped with dual-filament parking and turn signal lights, in either early or late styles. 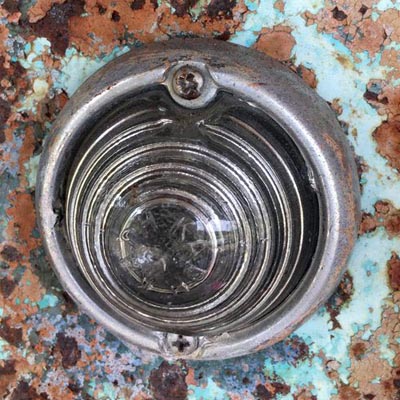 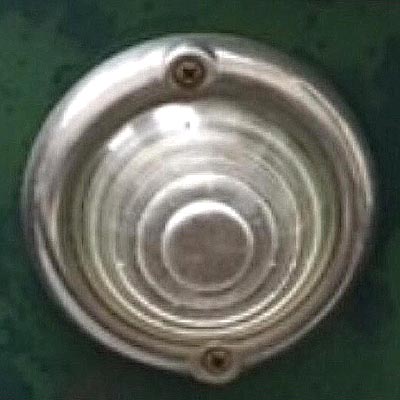 The early parking light and bezel on the left is 2-3/4" diameter, and is stamped stainless steel which was given either a polished or painted black finish. The later one on the right is only 2-1/4" in diameter and is made of chromed pot metal.

Side by side comparison shows that besides being a different diameter, the way the bezels are shaped around the screws that hold it on has a subtle but completely different look. This change came after serial number 56337 14504, which was also in mid-1959. 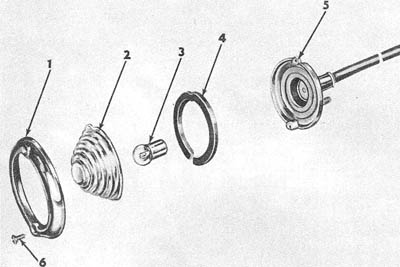 The illustration of the early parking lights in the 1956 DJ-3A Parts List shows the small screws used to hold the bezel to the lamp housing, which in turn has two bolts which hold it to the radiator guard. 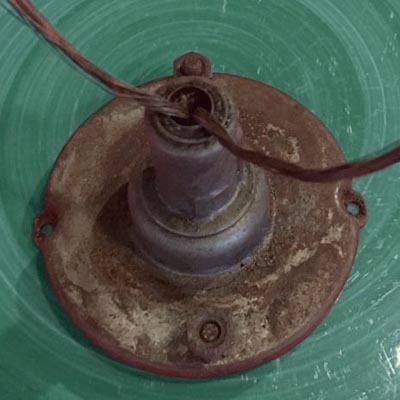 A view of the back of the early housing shows the bolts and nuts which attach it to the radiator guard. (This example is waiting to be re-wired and restored.) 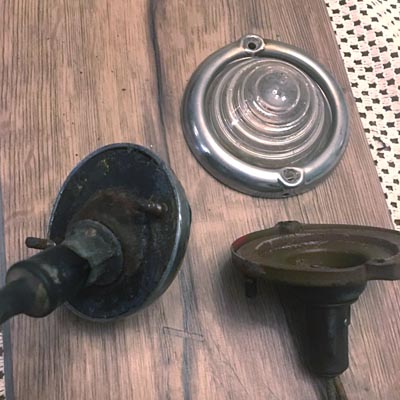 I may have to replace the really short screws that hold the bezel and glass on my early housings. (Mine seem to be MIA at this time.) 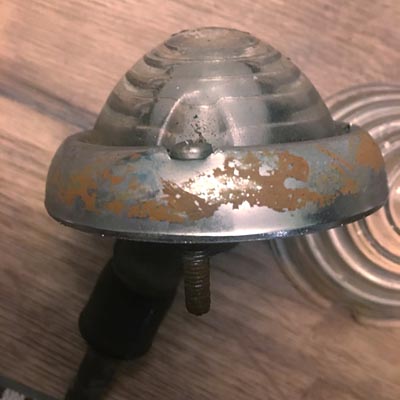 The later (and smaller) parking light assembly had long screws that went completely through the bezel, housing, and grille to hold all three together.

(The illustration in the 1962 Parts List (80K JPEG) incorrectly shows the same short screw used in the early version.)


The early parking and turn light uses 1158 6V or 1176 12V bulbs (below, left.) These dual filament bulbs for the early fixtures have locating pins straight across from each other. 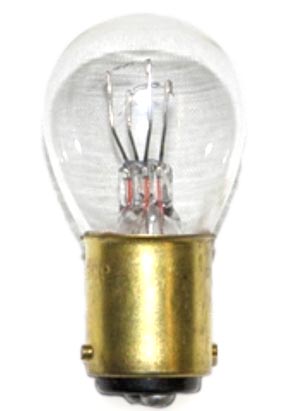 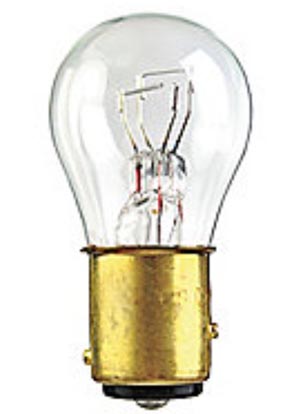 A description of ALA, Hall and other taillights can be found in Early Civilian Jeep Taillights.

Dinesh: "That is great information on the lights and grille across early and late DJs. My 1964 DJ-3A has what I believe to be original parking lamps. Amber colored, marked APSO and SAEPD 64. Could you kindly help me know what bulbs would fit in there?"

Steve K: "I'm using 1157A for front turn signals -- an amber bulb behind original lens, late model. Also, here's a site for reference -- I'm not promoting or connected to them, but they have a very useful and informative list of bulbs."

Charles: 1157A amber bulbs would have the offset pins just like the 1157 clear bulbs. 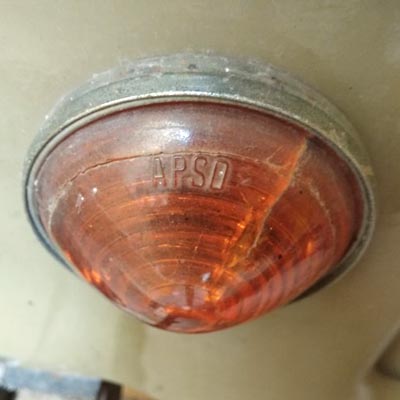 Steve K found replacements for sale at Kaiser-Willys. According to KW these are 3" in diameter and do not have a separate bezel. 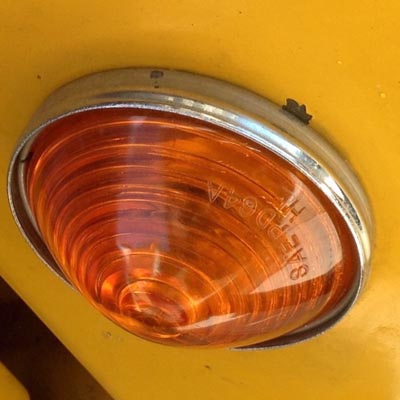 Dinesh: "The part number on the lens is SAEPD64A. (The SAE prefix stands for "Society of Automotive Engineers." Reproduction lenses will not have this prefix on the part.) I'm sure that both lens types were used that year, but most were amber."

Colin Peabody: "I don't have any info on the amber lenses, however I will advance a theory: 1964 brought several federally mandated safety and environmental requirements to the automotive industry. The old-style PCV system used by Willys in pre-1955 days on the L-134 was brought back in the 1964 models and the Feds also mandated amber front turn signals as a safety for all 1964 and later vehicles. Most manufacturers adapted that standard earlier, 1962 or '63 in anticipation of the requirement for all 1965 vehicles. Kaiser Jeep probably lagged behind since their production numbers for DJ-3A Jeeps was so low and the cost to change was a consideration."


Thanks to Charles and the other contributors. See also Radiator Guard (Model CJ-3B). -- Derek Redmond